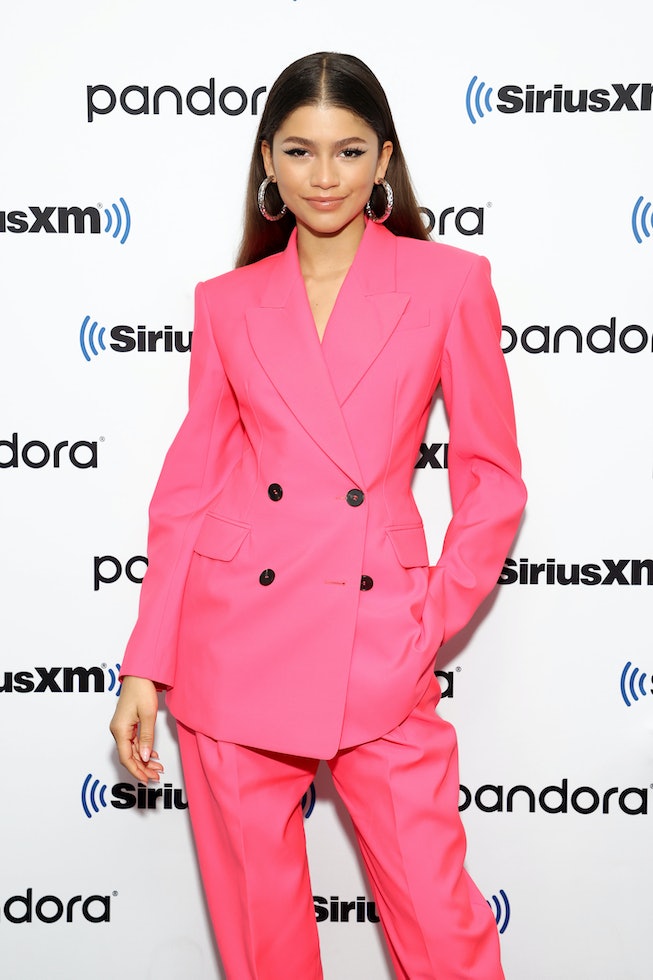 Zendaya is on the road to promote her new film Spider-Man: No Way Home, and her outfits are still going strong. Her latest appearance in New York City, where she was captured in the early morning of Friday, Dec. 10 for the live recording for Good Morning America and an appearance for SiriusXM, featured yet another jaw-dropping look: a tailored suit in a bright Barbie pink, one of 2021’s most on-trend colors.

The 25-year-old was seen greeting fans and signing autographs before making her way inside in a double-breasted blazer, adorned with a plunging neckline and contrasting black buttons, and a matching trouser set from Alexander McQueen. She then styled her on-camera ‘fit with tall black pumps and giant silver hoops for the ultimate polished finish. Zendaya was seen alongside her co-star Tom Holland, who wore a beige trench coat layered over a black jumper and green shirt. He completed his look with a pair of navy trousers and black leather shoes.

It’s no surprise that the actress is seen in yet another jaw-dropping look, as she was seen a week prior on Monday, Nov. 29, kicking off the official press tour in Paris for the upcoming Spider-Man film, which is set to premiere in theaters on Friday, Dec. 17. On the red carpet, Zendaya made headlines as she donned a vintage black gown, which her stylist Law Roach archived from Roberto Cavalli’s Fall 2000 collection. The sleek silhouette was updated by the brand’s current creative director Fausto Puglisi and featured an open back embellished with a golden spine jewelry piece. Zendaya also finished her vintage outfit with a pair of statement black pumps and go-to large hoop earrings.

She’s on an Alexander McQueen suit kick, as well, it seems. On Sunday, Dec. 5, the actress attended the film’s premiere in London wearing another full look from the British designer, which featured plenty of Spider-Man references, including crystal raindrop embroidery that resembled webbing all over her double-breasted blazer and thigh-high boots and spiderweb diamond earrings that feature a spider-and-pearl pendant.

See Zendaya’s recent outfit at Good Morning America and the SiriusXM studio in New York City, along with Tom Holland and Jacob Batalon, in more detail, below.