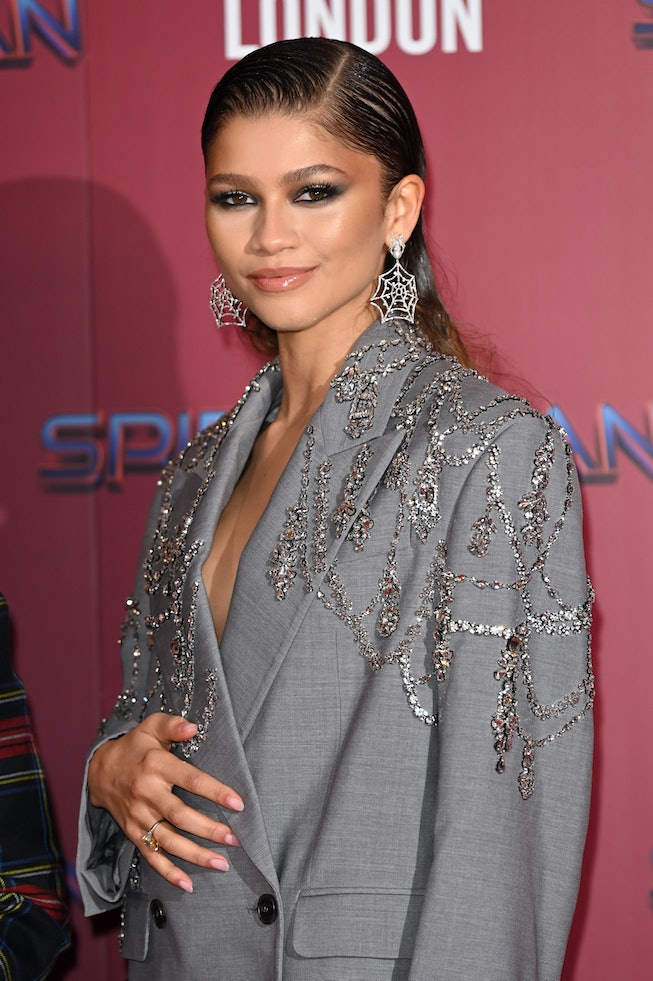 The press tour for Spider-Man: No Way Home is officially underway, and Zendaya is already serving her best looks on the red carpet. On Sunday, Dec. 5, the actress attended the film’s premiere in London wearing a full look from Alexander McQueen. Styled by her go-to image architect Law Roach, Zendaya’s ensemble was an homage to the Spider-Man franchise with crystal raindrop embroidery that resembled webbing all over her double-breasted blazer and thigh-high boots. She also accessorized her look with spiderweb diamond earrings that feature a spider-and-pearl pendant.

This isn’t the first time that Zendaya referenced her new film on the red carpet. Back in November at the the 2021 Ballon d'Or Ceremony in Paris, the actress wore a vintage Roberto Cavalli dress (from Fall 2000, to be exact) that had a golden spine jewelry piece along the back. Shortly after her first appearance, a fan account pointed out that the open-back embellishment may have been a reference to the villain Dr. Octopus from Spider-Man. “Zendaya as Dr. Octopus but make it fashion. Villain Zendaya embodiment,” wrote the account in its post caption, which the actress reposted on her own Instagram Stories.

With Spider-Man: No Way Home not hitting theaters until Thursday, Dec. 16, there are still plenty of exciting red carpet opportunities for Zendaya ahead. Until then, check out her latest look in Alexander McQueen in more detail, below.

Paris-based designer Marco Ribeiro made his red carpet debut, thanks to Emma Corrin, who wore a look from his upcoming collection to the 2021 British Independent Film Awards.

Florence Pugh wore Valentino for the premiere of her new film, Don’t Look Up.

Jennifer Lawrence (and her baby bump) wore a Dior Spring 2022 gown for her return to the red carpet for the premiere of her new film, Don’t Look Up.

Willow Smith is getting in on the Y2K fashion comeback. The NYLON cover star wore a cropped, bedazzled baby tee and a pleated denim micro-mini skirt for her 2021 Audacy Beach Festival performance in Florida.

MGK celebrated the launch of his new nail polish line UN/DN LAQR alongside his girlfriend Megan Fox, and the two continued to show off their matching couple style in all-black looks and a linking chain from their manicures.

Olivia Rodrigo is giving us holiday party outfit inspiration in a bow-adorned mini-dress from Calvin Luo (layered over a Tank Air mesh top), embellished shoes from Nodaleto, and knee-high sheer socks at the Variety 2021 Music Hitmakers Brunch in Los Angeles.

Lil Nas X attended (and made the best TikTok) in a Balmain Spring 2022 look at the Variety 2021 Music Hitmakers Brunch in Los Angeles.

Rihanna made sure to dress warm, cozy, and stylish while out in New York City, wearing a Miu Miu quilted bomber jacket and sport-inspired apparel from Martine Rose, along with Loewe Paula’s Ibiza sunglasses, Balenciaga boots, and Miu Miu gloves.

Dixie D’Amelio wore a custom-made cutout top and baggy pants from the GCDS and Bratz collaboration for her performance at the 2021 Jingle Ball Tour in Fort Worth, Texas.

Rachel Zegler wore a Dior Haute Couture look from its Fall 2018 collection to the New York premiere of her upcoming film West Side Story.