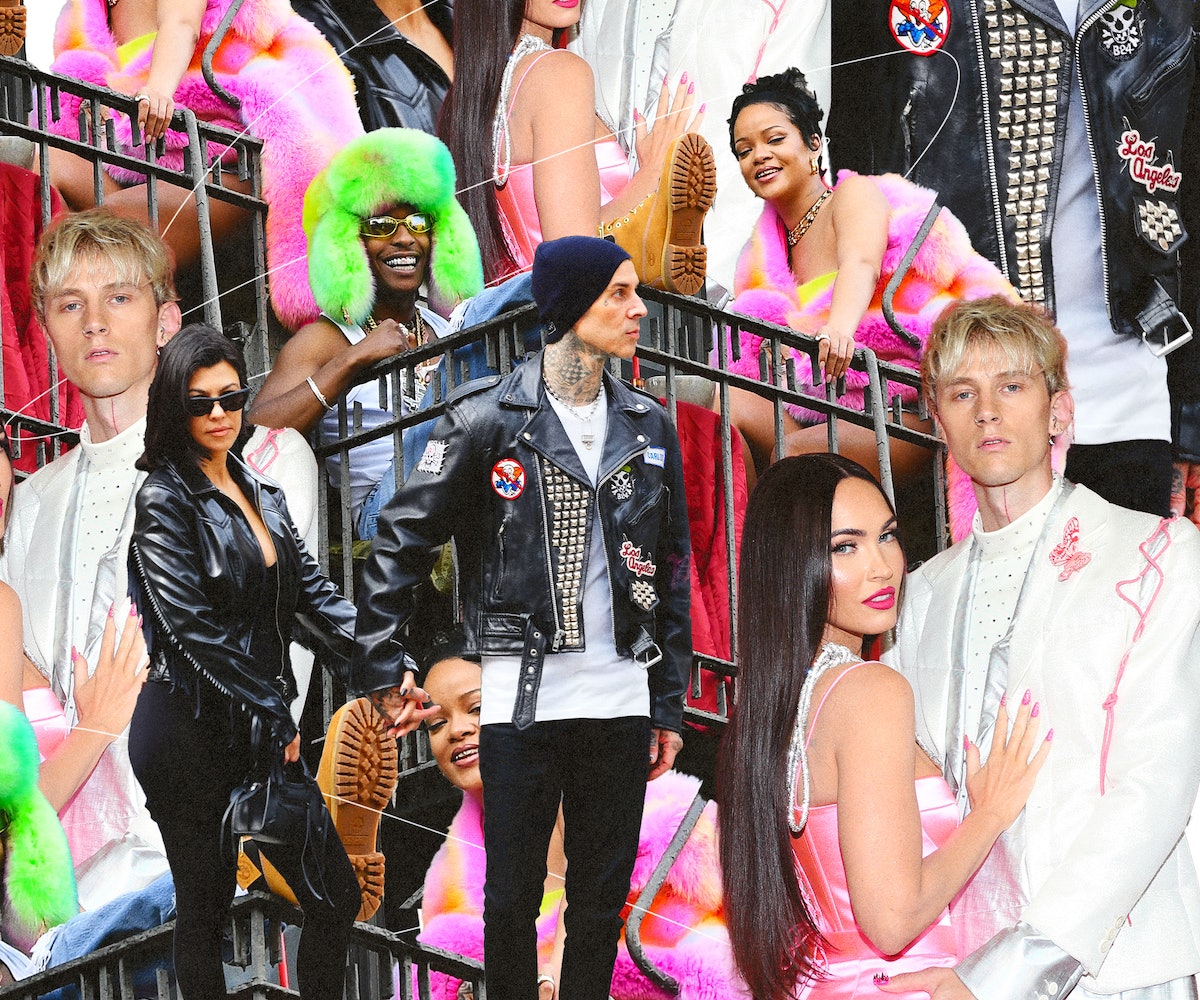 After remerging into society this year after a lockdown-filled 2020, fashion found its footing again with in-person events back on, and with that, so did celebrity couple dressing. Exercised during the early 2000s by famously-in-love stars, who publicly appeared in almost identically decked-out ensembles — how can we forget Britney Spears and Justin Timberlake’s denim duo look in 2001? — couple coordination has taken over pop culture yet again, leaving us all obsessed.

From Megan Fox and MGK’s edgy glamour, to Kourtney Kardashian and Travis Barker’s punk-inspired outfits, to Rihanna and A$AP Rocky’s high-fashion wardrobe, 2021’s most recognizable couples have suddenly found themselves in sartorial matrimony after being individually admired for their own personal styles. Clashing ensembles between romantic pairs faded away and were replaced with complementary looks, as romantically linked stars merged aesthetically to create a tantalizing new bout of power couple imagery. Being presented as a packaged deal has given these besotted celebrities not only a newfound wave of media attention, but even more intensified influence as a result in this latest era of “couple branding.”

This phenomenon last worked most effectively two decades ago, colliding with the height of paparazzi culture when who celebrities dated sparked livewire press attention. Leading the way were Spears and Timberlake and their relationship from 1999 to 2002. In just a span of three years, their practically conjoined images marketed themselves as the perfect pop-star pair. Other famous couples soon followed in stylishly promoting their unions, like Jennifer Lopez’s relationship with Diddy from 1999 to 2001, Victoria and David Beckham (married in 1999), as well as Kanye West and Kim Kardashian (started dating in 2012, married two years later, and now separated).

Beyoncé and Jay-Z have no doubt been most successful at benefitting from couple branding after two world tours together, a joint album, and their latest Tiffany & Co. husband-and-wife ambassador deal. Looking refined in a Breakfast at Tiffany’s style campaign for the luxury jewelry brand, the married pair’s coordinating styles have come a long way since their Y2K fashion days and are so impactful nearly 20 years later.

In 2021, celebs that teamed up to utilize their coupledom have left fans — and brands — hooked. After Fox was rediscovered as a fashion star working with celebrity stylist Maeve Reilly, she released her debut clothing collection with Boohoo, containing signature pieces akin to what she’s been wearing alongside her rapper-turned-rocker beau MGK, whose look has also evolved. The pair’s revved-up image even got them featured on the cover of British GQ this fall, and Fox has experienced a career revival in effect that has seen the Hollywood actor book her first-ever Met Gala red carpet appearance, a Netflix movie, and her latest role in The Expendables 4.

Kourtney Kardashian swapped her trend-leaning, colorful ’fits in 2021 in favor of dark and daring ensembles to match the punk image of her drummer fiance. The loved-up pair left behind a trail of his-and-hers outfits as they were seen globetrotting this summer across Italy, New York, Cabo, and back to L.A. Having their personal styles evolve with their partners who share similar aesthetics, Fox and Kardashian also bonded this year as friends and even synced their own images together to front a Skims campaign in a genius marketing move.

When two individual style icons pair up, there’s never a dull fashion moment. Such is the case for Rihanna and A$AP Rocky, who took their longtime friendship to the next level with a confirmed relationship in the spring of 2021. Since then, they’ve often been spotted in fashion-forward looks, from similar trucker hats and camo pants to matching red outfits at Complexcon. At the Met Gala in September, RiRi and Rocky made it evident that they know how to sell as fashion’s leading power couple, as the duo were the last (and most anticipated) to appear on the red carpet in cool high-fashion looks from Balenciaga and ERL, respectively.

In discussing celebrity couples who took over the style rounds this year, it would be remiss not to mention Lopez and Affleck’s headlining return to the red carpet as “Bennifer.” First dating in 2002, the Hollywood pair gave us off-duty velour tracksuits and trucker caps, while switching to glam gowns and sharp suits on the event circuit. J. Lo has pretty much perfected couple dressing at this point, having worn her then-boyfriend Diddy’s fashion line at the 2000 VMAs and, in 2020, dressed in harmonizing black tie attire with former fiance A. Rod. Reuniting with Affleck in 2021, the couple quickly reformed their glitzy style union of almost 22 years ago, supporting each other’s projects publicly as Bennifer’s impact returned with full effect.

Reengaging in actual outfit-wearing this year has cultivated the prime opportunity for finding the fun in fashion again in partnerships, as well as individually, and 2021 brought this out from some of the most recognized faces today. With 2022 around the corner, it’s a wonder what the next 12 months will bring when it comes to duo dressing — perhaps we’ll see Kardashian bring new rumored beau Pete Davidson ’round to her dramatic and demure Balenciaga looks of late, or more of Zoë Kravitz and Channing Tatum remaining oh-so-coolly dressed to impress. Meanwhile, Zendaya with boyfriend and Spider-Man co-star Tom Holland will surely break the internet together on red carpets to come. Judging by these already-made style icons, the outlook looks promising.

Take a trip down memory lane with some of the most memorable coupled-up celebrity fashion moments of 2021, ahead.

Pop of Pink at the 2021 iHeartRadio Awards: Megan shone bright in this satin jumpsuit alongside MGK decked in silver. The actress complemented his look with silver shoes and bow-tied shoulder straps, while he nodded to hers with pink striped socks.Emma McIntyre/Getty Images Entertainment/Getty Images
Shimmering at the 2021 VMAs: Megan wore a mesh custom dress by Mugler displaying iridescent threads that subtly matched the metallic panels of MGK’s red suit.Taylor Hill/FilmMagic/Getty Images

PDA at the 2021 VMAs: Kourtney and Travis made their red carpet debut at this year’s VMAs in all-black ensembles with lace-up details and spike studs — risqué in the best way.Jason Kempin/Getty Images Entertainment/Getty Images
Matching Motos: Kravis showed off their emo image out in New York City with similar leather moto jackets, proving here that their style is truly synced.Gotham/GC Images/Getty Images

Red Carpet Debut Redo: Reunited and it looks so good. J. Lo stole the show appearing beside Ben at the premiere of his new film The Last Duel wearing a plunging bejeweled gown. Meanwhile, he looked dashing in his tuxedo — a true Hollywood style match.Stephane Cardinale - Corbis/Corbis Entertainment/Getty Images
Paired-Up Glam: The couple kept their modern-day glamour going while promoting The Last Duel, with Ben in a classic black suit and Jennifer in a show-stopping two-piece set from Hervé Léger.Arturo Holmes/Getty Images Entertainment/Getty Images
NEXT UP
Culture
Lindsay Lohan’s New Style Era Is Sweet Redemption
Culture
An Exhaustive Breakdown Of The Balenciaga Controversy
Fashion
The Mini Skirt Was The Must-Have Celebrity Fashion Item Of 2022
Fashion
Kim Petras Wore An All-Denim Homage To Britney Spears At The 2022 AMAs