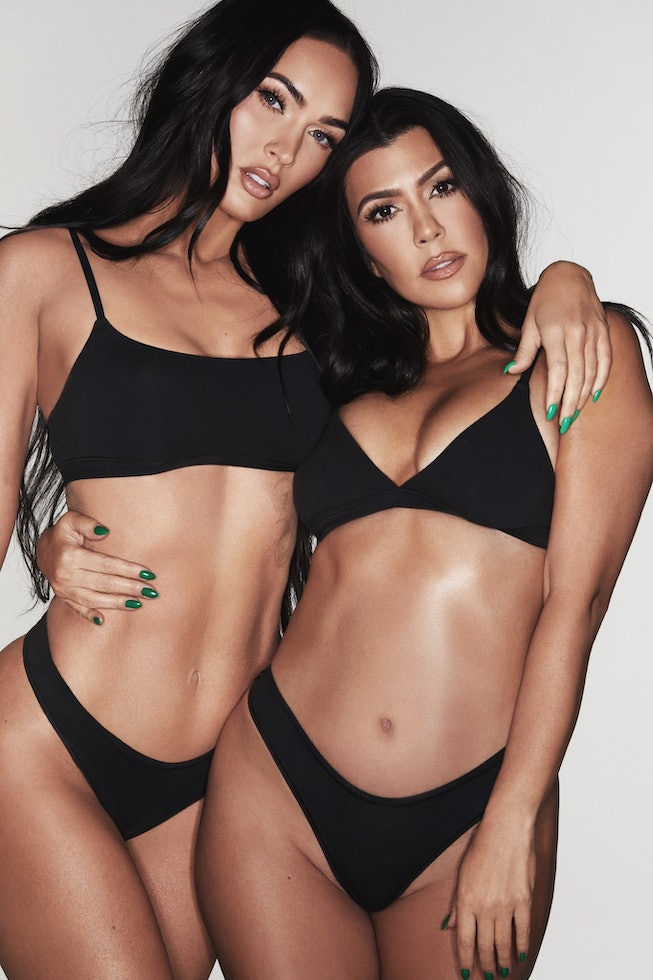 Following the release of SKIMS’ cotton collection restock, Kim Kardashian enlisted a few close friends and loved ones to star in the launch’s campaign, and it’s a good one. The marketing genius called up goth-girlfriend duo Megan Fox and Kourtney Kardashian to show off the solutions-focused brand’s cotton bras and underwear — in no other color but black, of course.

The new imagery, photographed by Donna Trope, is giving us Twilight vibes. SKIMS revealed the campaign on Instagram with a photo of Fox and Kourtney sharing an apple. Meanwhile, Kim took to Twitter to share the news, including a few more shots wearing matching cotton jersey and rib pieces (as well as matching green manicures) while holding a bouquet of roses.

“Kourt, forever isn’t long enough 🖤 Welcome to our SKIMS Cotton Shoot — an immersive experience @skims,” wrote Fox on her latest Instagram post, which featured even more (topless) photos of the two. On Instagram Stories, the Jennifer’s Body icon published a photo of them wearing white matching sets and feeding each other cherries.

“I love that SKIMS really understands what women want to wear and that they want to feel sexy, confident and empowered,” said Fox in an official statement. “I loved being in this campaign with Kourtney, we had so much fun shooting together.”

Added Kourtney, “I had so much fun shooting with Megan for the campaign. SKIMS really is my favorite for my undies, bras and basics — I think I would say that even if Kim weren’t my sister!”

Fox and Kourtney’s friendship grew stronger since they both started dating their “future baby daddies” Machine Gun Kelly and Travis Barker, respectively. The two couples are often spotted together at shows, dinners, red carpet events, and the occasional sports stadium bathroom. Because MGK and Barker collaborate on music together, the two women have stayed close, sometimes even threatening their partners to take time off from the studio.

“Me and Travis invent ways to go to the studio, even if we have absolutely no reason to be in there,” MGK told NYLON. “Our girls [Kardashian and Megan Fox] are like, ‘I swear to fucking God, if you guys go to the studio every single day, we are going to fucking leave!’ We had to be, like, banned from the studio from each other for a minute.”

Fox and Kourtney’s joint campaign joins a slew of other famous faces who have modeled for SKIMS, including, most recently, supermodel Kate Moss, Paris Hilton, and another friend of Kourt, Addison Rae. The brand has also been gaining worldwide attention, thanks to the Tokyo Olympics over the summer, as Kim garnered the deal of dressing the USA Team’s female athletes in loungewear, pajamas, and underwear for their off-duty time from competing.

This article was originally published on Sep. 22, 2021