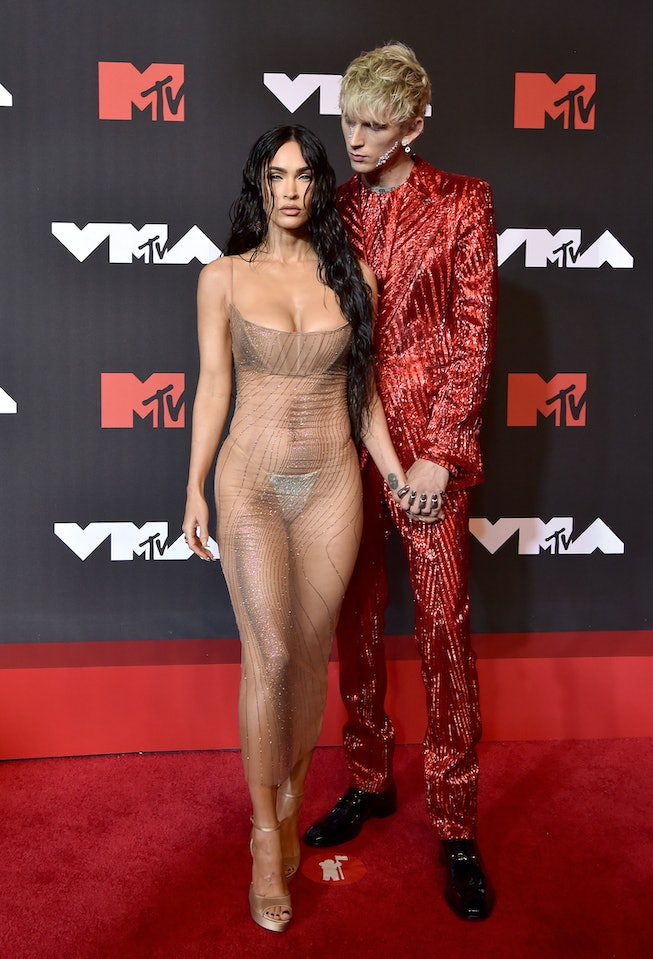 Machine Gun Kelly made his debut performance at the 2021 VMAs alongside Travis Barker on Sunday night, and fittingly, their girlfriends Megan Fox and Kourtney Kardashian introduced the duo, calling them their “future baby daddies.” Pop-punk love is real!

Thus commenced Kelly’s electrifying performance of “papercuts” which closed out the award ceremony. Dressed in a green tartan poncho with blood-red thorns glued to his face, Kelly rocked out on what also looked to be a gravesite; Barker was in his normal position at the drums.

The rapper-turned-pop-punk star was nominated for one VMA this year in the category Best Alternative for his track “my ex’s best friend” featuring blackbear, which he won. He won the same category in 2020 with his song “Bloody Valentine.” “My ex’s best friend” is off Kelly’s 2020 album Tickets To My Downfall, his first pop-punk release following previous rap albums. It marked a major sonic shift for him as he worked with some of pop-punk’s biggest names for the release, including Travis Barker.

“papercuts” is the lead single off Kelly’s forthcoming new record, Born With Horns, which will find him mining the depths of pop-punk again. Kelly and Barker, who will come on as executive producer for the album, announced the project back in August by getting matching tattoos of the album title on their forearms.

Lately, Kelly has also been making moves in the acting space with a recently announced stoner comedy in the works with fellow pop-punk musician Mod Sun, and a role in the serial killer thriller Midnight In The Switchgrass opposite his girlfriend, Megan Fox. The two met on set of the July 2021 movie, and since, the two have not been subtle with their whirlwind romance. As Fox described intensely in a recent interview with NYLON: “Loving [Kelly] is like being in love with a tsunami or a forest fire. The intensity of merging with him is just overwhelming, and the threat it poses is so powerful but so beautiful that you have no choice to surrender with reverence and with gratitude.”

The pair made their couple debut on the 2021 VMAs red carpet, with Kelly in a red suit and pearls on his face, and Fox in a sheer nude dress.

The 2021 VMAs took place on Sunday, September 12 at the Barclay’s Center in New York with Doja Cat as host. See the full list of nominations here.