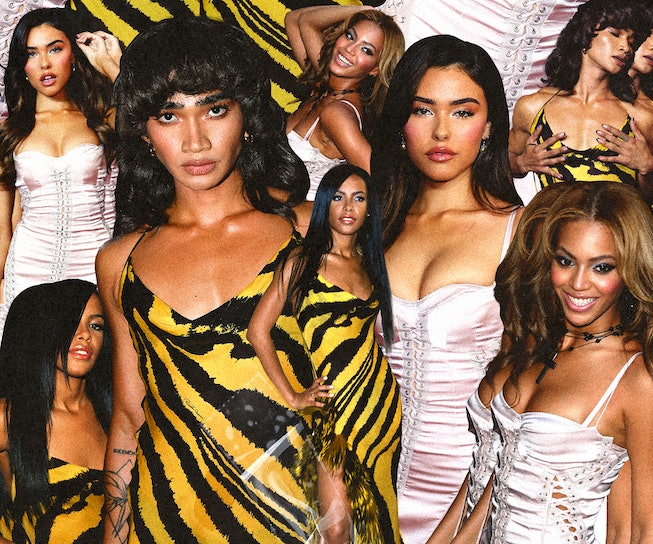 Nostalgia isn’t unique to contemporary pop culture, but so far in the 2020s, it’s in overdrive. The decade is still young, but the question remains: How will we define our own form of pop culture for the 2020s in an era of remakes, reboots, and consistent homages to our favorite celebrities?

In September, 22-year-old singer Madison Beer arrived on the VMA red carpet in a pink corseted silk and lace Dolce & Gabbana dress from the line’s Spring/Summer 2003 collection. Beer looked stunning, but headlines immediately clocked the look for what it was: an homage to the same dress Beyoncé wore 18 years prior. Social media influencer Bretman Rock turned up to the red carpet in a yellow tiger print Roberto Cavalli dress, the same dress the late R&B singer Aaliyah popularized almost two decades before. “I like to pretend that it still smells like Aaliyah, and I just hope that Aaliyah is looking down at this little brown Filipino boy giving her dress justice 21 years later,” a gleeful Bretman told Variety.

While fashion is an integral part of pop culture, the regurgitation of iconic moments makes for nostalgic whiplash. For stylists, dressing clients in beloved references yields a higher reward — media recognition, for example — for less work. On the consumer front, brands such as Vetements were quick to capitalize on 2000s nostalgia at its start: In 2018, the French fashion house released a Juicy Couture collaboration, complete with rhinestone tracksuits that looked straight out of 2003. Champion may have peaked in the 90s, but in 2021, its hoodies and sweatpants are once again inescapable. From the resurgence of Balenciaga’s City Bag to Hulu’s scandalous Von Dutch documentary, the message is clear: 2000s nostalgia is the look du jour.

In entertainment, TV and film executives constantly push reboots of original shows that are still popular and in the zeitgeist. Often, these reboots follow a similar premise, but include more BIPOC and LGBTQ+ characters. The idea of bringing back a show or movie that has a die-hard fandom is an easy win for executives; there’s little risk because people will tune in, even if they choose to hate-watch. Young people, especially teen girls, have an enormous impact on pop culture, from running TikTok accounts for ’90s and 2000s shows, it’s no surprise that the industry is trying to appeal to them and boost profits.

With the current reboot deluge in culture, it almost doesn’t matter if the show is an objective failure or success when it dominates social media conversations. Take HBO’s Gossip Girl revival; riding on the original’s continued impact and society’s warped love for rich kids, the new generation of Upper East Side teenagers need only be marginally more socially conscious than their predecessors to achieve omnipresence. Nostalgia will do the rest of the heavy lifting.

Nostalgia is a safety net for artists; it's harder to rip apart a statement of current pop culture when the basis and foundation is conceptualized from a beloved moment. Originality is rare, but those open to experimentation are the ones leaving their mark on the industry at present. Like any pop star, Doja Cat capitalized on the viral success of “Mooo!” in 2018, and we couldn’t navigate social media without seeing the “Say So” dance challenge from TikTok. As a child of the internet, she’s been able to harness the immense power of social media, but her success isn’t limited by this; from her rock renditions of “Say So” at the Made in America festival and the 2020 MTV EMAs, she reminds us that she’s animated and versatile. To watch Doja Cat is to watch one of our generation’s most consistent and talented performers.

As noted in Billboard: “Doja Cat is a pop star who will spend more time tweeting memes and trolling her fans than sending out links to her new music and videos. What she’s tapped into isn’t necessarily relatability, it’s realness; she isn’t trying to create an image to relate to any particular demographic; she simply exists as herself on the internet like everyone else, and that’s enough.”

The noughties had its own issues with misogyny, homophobia, and racism, but it also represented a new century, one filled with optimism. It’s obvious that every generation goes through its own struggles, but the rapid introduction of social media platforms and technologies created a new environment for Gen Z, completely altering the experiences of childhood and teenagedom. The hyperfocus on nostalgia doesn’t necessarily mean culture won’t move forward — it will simply evolve as it’s done time and time again. The Gen-Z-fueled push for talent representation from across races, genders, and life experiences will shape the decade to come, and the infancy of this era will eventually find its own place in the nostalgia cycle. Perhaps romanticizing the past will always be easier than reckoning with a future filled with global crises.