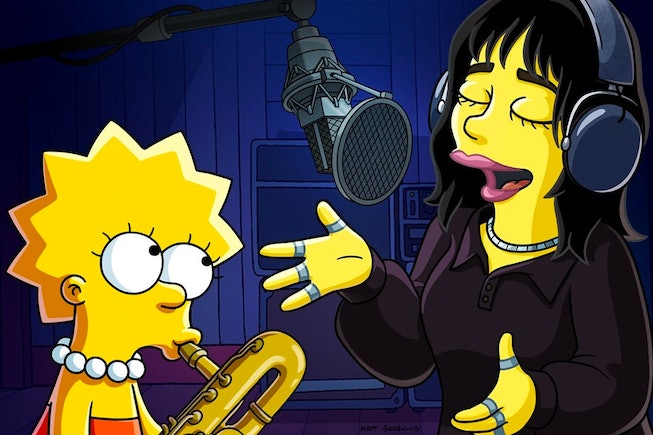 Billie Eilish may be booked and busy, but she’s still got time to help out a beloved, aspiring musician: the one and only Lisa Simpson. The Oscar-winning singer is the latest celebrity to join The Simpsons canon, lending her voice and likeness to an upcoming short titled When Billie Met Lisa.

The short, which features Eilish’s collaborator and brother Finneas, finds Lisa securing a once-in-a-lifetime invite for a studio jam session with the high-profile siblings. “In When Billie Met Lisa, Lisa Simpson is discovered by chart-topping artists Billie Eilish and Finneas while searching for a quiet place to practice her saxophone,” reads the special’s synopsis. “Billie invites Lisa to her studio for a special jam session she’ll never forget.”

Lisa linking up with Eilish is a great match, minus the whole being a fictional, two-dimensional character thing. The brainy middle child of the Simpson clan has had a deep, spiritual connection with her saxophone since the show’s first season in 1990, and will likely serve as the ideal basis for bonding with a teenage superstar like Eilish. When Billie Met Lisa premieres on Disney+ on April 22, and marks the fourth short The Simpsons have released on the streaming platform.

While the animated Eilish will be focused on nourishing Lisa’s musical ambitions, the real Eilish is fresh off an Oscars win and a standout Grammy Award performance; the singer took home the Oscar for “Best Original Song” for her James Bond ballad, and raged in the rain as she performed “Happier Than Ever” at the 2022 Grammys.

The singer made history at the 2020 Grammys ceremony as she became the first woman artist ever to sweep the Grammys’ Big Four general field categories on the same night. The “Big Four” denotes the most prestigious and coveted awards, including Record of the Year, Album of the Year, Song of the Year, and Best New Artist. The only artist to ever do the same was Texan singer-songwriter Christopher Cross in 1980; Adele has also won awards in all four categories, though not in the same year.