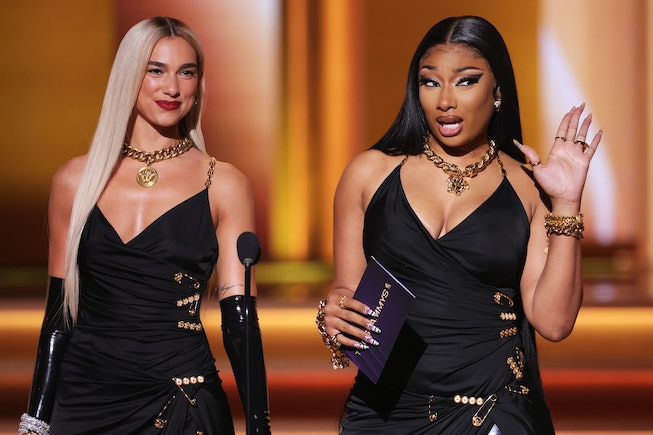 When it comes to mining nostalgia, doing so at an awards show just makes sense. Lisa Kudrow and Mira Sorvino turned the 2022 SAG awards into a meta reunion for Romy and Michele’s High School Reunion, and at the 2022 Grammy Awards, Dua Lipa and Megan Thee Stallion paid tribute to two legendary divas that came before them: Mariah Carey and Whitney Houston.

Dua and Megan hit the stage on Sunday night to present the Grammy for Best New Artist, but a minor wardrobe snafu distracted them from the mission at hand: both artists arrived wearing the same sultry black Versace gown. The question was nothing about who wore it better. It was much more pressing: Who was going to change on such short notice? The obvious comedy bit was already cute, but devoted pop culture scholars, of course, knew where this was going. They had seen it all before back at the 1998 VMAs, when Carey and Houston arrived on stage to present Best Male Video, both clad in the same slinky brown dress.

“Nice dress,” quipped Carey. “Yeah, um, you look pretty good, too. You do,” joked Houston. After some musings about the seemingly “one of a kind” dress both singers were promised, Carey declared that she came prepared for such a situation and proceeded to tear off the front of her skirt into a daring asymmetrical silhouette. “Try it on me,” she yelled as the crowd predictably lost its mind. Not to be outdone, Houston also tore off the front of her dress to fashion a flowing high-low look. The pre-internet audience had never been delighted like this by two divas on live television, and an iconic moment was born.

Now, over twenty years later, Dua and Megan’s cheeky dress gag tribute ended in similar fashion. Dresses were shortened, Donatella Versace herself gave the artists her blessing with the extreme tailoring, and a new pop culture moment entered the cultural canon. While Carey and Houston awarded Best Male Video to Will Smith for “Just the Two of Us,” Dua and Megan bestowed the Best New Artist award onto pop-punk starlet (and NYLON cover star) Olivia Rodrigo. Time really is the weirdest little circle!