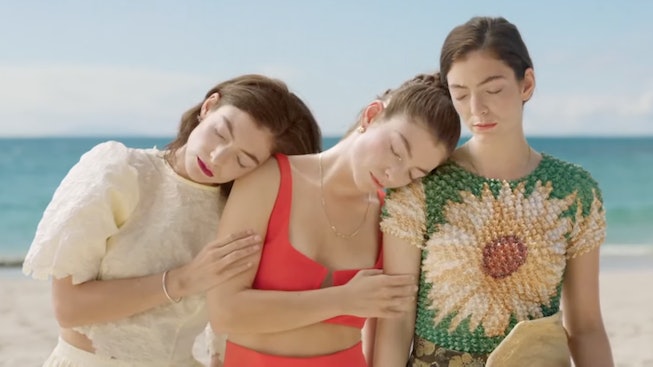 Just as the northern hemisphere launches into a highly anticipated spring season, Lorde is back with a new video for her single “Secrets from a Girl (Who’s Seen it All).”

In classic Lorde fashion, the mellow, pensive track from last year’s Solar Power touches on the singer’s favorite melancholic topics: the swift passage of time, growing pains, learning to love after heartbreak, and the infinite mysteries of the subconscious. And what better way to visualize this than romping around a deserted beach with different versions of yourself?

Three separate Lordes cavort on the sand — one notably wearing the wild curls and dark lipstick of her critically acclaimed Pure Heroine era that started it all — as they muse about the secrets accumulated after approximately a quarter century of seeing it all.

“Secrets from a Girl (Who’s Seen it All)” also features vocals by Robyn, who appears as a sort of omniscient voice and tour guide for Strange Airways: “Your emotional baggage can be picked up at carousel number two / Please be careful so it doesn't fall onto someone you love / When we've reached your final destination, I will leave you to it.” Book us a one-way ticket, please!

Of the “Secrets from a Girl (Who’s Seen it All)” video Lorde says, “…this song is me in communication with another version of me, trying to send along the wisdom I’ve started to gather along the way. When we were plotting the video, Joel brought up some old film/TV tropes about groupings of women. It inspired me to identify three distinct parts of myself, and imagine what would happen if these parts were able to meet… the Child in her purple lipstick and silver jewelry, big curls thrown over to one side, skipping and bouncing like I did as a six year old; the Lover, a baby woman in red with a little diamanté eye, waking up hungover and divine; and the Gardener, me at my wisest and most crunchy, dressed in my own clothes… I hope you love it.”

Off the beach filled with the sands of time, Lorde is gearing up for a massive tour in support of Solar Power, which kicks off on April 3 and takes her across the United States and Europe — and updating her only form of social media, an Instagram blog in which she reviews onion rings. Watch “Secrets from a Girl (Who’s Seen it All),” below.