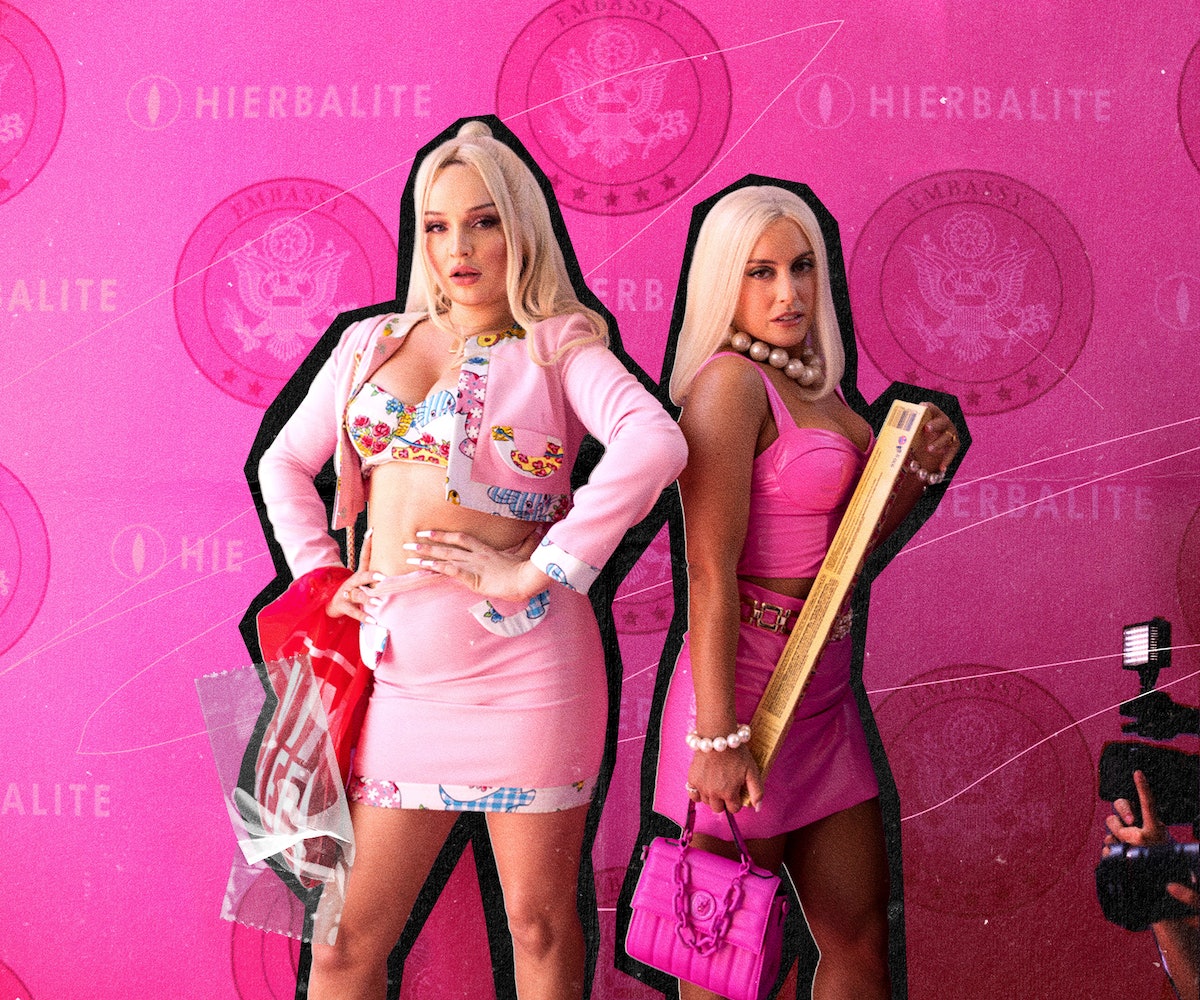 One of the most realistic plots in Los Espookys — the critically acclaimed surrealist comedy brainchild of Julio Torres, Ana Fabrega, and Fred Armisen — is that the United States is meddling in the presidential elections of the unnamed Latin American country in which the show takes place. Running the mission of furthering American interests abroad is Ambassador Melanie Gibbons (Greta Titelman), a cutthroat, platinum blonde Hell-bitch. Ambassador Gibbons sees the world in hot pink and American exceptionalism, and she’s praised for it by her sycophantic staff (which now includes an ESL demon) as well as her boss, Secretary of State, Kimberly Reynolds (Kim Petras).

In her acting debut, Petras steps out of a chauffeured vehicle paid for by American taxpayers and struts the American Embassy red carpet with a duty-free gift bag, airport chocolate, and pop star swagger. It's a perfect project for the singer, who already possesses a self-described “bitchy, gets whatever she wants” stage persona, and gives the scene-stealing Titelman another moment to remind us the magnitude of her comedic prowess.

“Kim is an incredible actor. She came to set prepared like Nicole Kidman,” Titelman tells NYLON. “Ready to go.” The duo immediately bonded on location in Santiago, Chile — while driving around listening to Slut Pop before its official release, among other adventures — retaining their playful rapport both on and off screen. “Los Espookys are some of the sickest, illest people I've ever met or worked with,” says Petras. “You can't f*ck with them. It's a cult classic already. It doesn't even need to age. You better get with it.”

Ahead, Petras and Titelman discuss their favorite moments on set, the magic of working with friends, and recording a music video on the moon.

Kim, how did you get involved with this season of Los Espookys?

KIM: I got involved in 2019, Julio [Torres] and Bowen Yang came to my show at Terminal 5 in New York and we hung out backstage after the show and talked. A couple days later I got a DM from Julio that was like, "Would you ever be down to be in Los Espookys?" I was like, "Yeah! Oh my God, I love that show." My friends and I are obsessed with it, watching it over and over. I think we saw Season 1 three times or something. It's just so my sense of humor, and obviously, I'm a huge Halloween girly and spooky girly. I made “Turn off the Light” and then they told me later that they were writing the character while listening to “Turn Off the Light.” It took the pressure of an acting debut off of it a little bit because I have this bitchy, gets whatever she wants, stage persona already. I just needed to be that at the Embassy with Melanie Gibbons, and it was really lovely.

You both really nailed being really prissy, bitchy girls. What were your first impressions of the script this season?

GRETA: Well, for me, Season 1 was this seedling. We all were introduced to this universe and this world that was unlike anyone had ever seen on television before. When I got the scripts for Season 2, I was able to see this world fully blossom. That was so exciting because you're just in it at that point and there doesn't need to be set up. There doesn't need to be exposition, you're just in the Los Espookys universe. I was so excited to see what Julio and Ana created. They're true geniuses, so it's so fun to see how their minds work with jokes and story and world building. It was such a treat. I do think that everyone is unbelievable this season, but Ana is clicking in a whole other universe of funny this season, and it's amazing.

KIM: I got the script and I was like, "Yep, Kimberly Reynolds is me. Yes, I can bring something to that." It was so great because Ana also directed the episode that I was in, and she did so incredibly and made me feel very non-nervous.

Greta, I know that outside of the show, 99 percent of the cast are your real friends and you all have come up together. What's it like working with them in the context of the show?

GRETA: It's the best thing on Earth. Actually, knock on wood, thankfully, I've been really spoiled where most of my jobs have been me working with my friends. Obviously, this is such a different level because everyone in the cast — me, Spike, River, Eudora, Sam, literally everyone — we're all truly a friend group that has come up together. I think it's pretty surreal because you have this kind of amazing feeling of being like, "Wow, we're really doing it. We're really making a television show. If only we could have told ourselves this when we were doing some show at Over the Eight in 2014, or whatever." It's so cool. We have so much respect for each other and so much fun with each other, that's such a treat.

Speaking of River, oh my God. Those line deliveries. I'm laughing out loud every second of the show, but then River speaks and I’m really losing it.

Sonia is beyond. Sonia is such an amazing character. I do believe that all of us on the show are the only people on Earth that could be the characters.River and Sonia, it's just so funny. The Niagara Falls bit I think about every day and laugh.

Are there any standout memories from shooting this season?

KIM: Greta and I were immediately girlies. We would drive around Chile and I would play her Slut Pop for the first time.

GRETA: I was going to say. I got to hear Slut Pop before anyone else on Earth. First of all, when I heard “Throat Goat” for the first time, I was dying. That was so fun. It's such a vortex when we're shooting in Chile because we're all each other has. Also when we shoot in the city, it's in the summer and the city gets pretty quiet because a lot of people are out of town or at the beach. There were moments where we were walking around Santiago at night where we would be blasting music on the street and we would be the only people on a major city street. It's a very surreal feeling. That was so fun. When we wrapped, we went to this crazy restaurant that lost power.

GRETA: We were in full pitch black.

KIM: That was fire.

GRETA: That was fun. We eat a lot of vegan food together. We eat a lot at El Huerto. Shout out to the best vegan restaurant in Santiago, Chile.

KIM: It was really cool for me to get to know Spike and Ana. That's also a standout. I feel Spike and I had such a fun night with so many conversations. We clicked and I feel like I made friends. It felt like a summer vacation, truly. It was really welcoming and awesome for me.

Now that Melanie's dreams of transferring to the Miami Embassy are dashed, where do you hope her story leads? What do you envision for her?

GRETA: This is such a hard question that I have been asked before and I don't know. She could go so many different ways because the thing about Melanie is she's a little unexpected and she's crafty. She's a lot smarter than I think people give her credit for being. Number one, I would like to see Melanie's shadow somehow escape so that Melanie then has to kill her shadow. Then, Melanie is reflectionless and shadowless. I would really like that for Melanie. That's just a surreal note.

They could go 30 rounds.

Right now you're an actress, you're a pop star. If you didn't have these respective careers, do you have what it takes to overthrow a foreign government?

One of the parts of Season 2 that I really loved is Andrés's connection with the moon, and seeing all of that celestial world play out. If you had a direct line to the moon, what's the favor you’re phoning in?

GRETA: Oh, that's hard. Kim, do you know what you would ask the moon? I would probably want to go to a celestial party. I would want to attend a party that we kind of see with comets and galaxies and stars and things like that. I would like to be invited to that.

Listening party on the moon.

GRETA: Wait, Kim the moon would let you do a video there.

GRETA: “Hey girly! Can I shoot a video on you? Thank you so much.”

Kim, not a Los Espookys question, but your song “Unholy” with Sam Smith is set to secure its third week at No. 1? How are you feeling?

KIM: I'm over the moon happy. Sam is someone really, really special who I have a very genuine connection with. That we got on a song that we really love together, and it's doing this well, is incredible. I feel a lot of people, like Greta, the Los Espookys people, and Sam which fit straight into Los Espookys. It's kind of like these LGBTQ kids that didn't really fit in coming together and making shit that's amazing. And that's how the collaboration feels. It's a really exciting time for me and I'm so grateful.

GRETA: We're going to figure out a way to have Sam in season three of Los Espookys.

KIM: Yes. We were talking about this. We need to get Sam in season three!

This interview has been edited and condensed for clarity