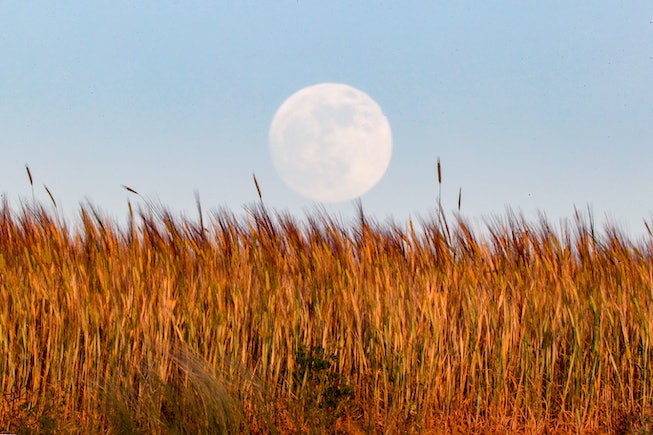 Every Virgo season is full of meticulous attention to detail, keen judgements, and a Pisces full moon. On September 10 at 5:59 a.m. EST, the moon will bloom in the expansive sign of the fish, creating a lunation ripe for all the dreamers out there — and, in general, anyone who is willing to go with the flow. Unfortunately for any control freaks reading this, September 2022’s full moon in Pisces will feel like a spiritual hammer to the head. Not only does the full moon kick off at the same time as the final Mercury retrograde of the year, it’s nestled up to Neptune, the planet of dreams and dissolution. Say goodbye to those boundaries, and read on to learn everything you need to know about the September 2022 full moon in Pisces.

Per The Old Farmer’s Almanac, the September full moon also goes by the nickname the “Harvest” moon due to its proximity to the fall equinox and its unique rising schedule: Unlike other full moons, the full harvest moon rises at almost the exact same time around sunset for several evenings in a row. Historically, farmers used these extra helpings of moonlight to finish their harvests before the frosts of fall arrive. Leave it to Pisces to switch things up for the greater collective.

Even astrology newbies know the deal: Mercury retrograde is not conducive for things anything that falls under the realm of communications. This includes, but is in no way limited to: making concrete plans, catching a flight, sending emails, or even having a conversation. Mercury is the trickster of the zodiac, and this round will likely be full of missteps. Going with the flow will be of enormous aid to you under the Pisces full moon, and you’ll be wise to keep up that energy throughout Mercury’s retrograde period.

The Pisces full moon is cozied up with Neptune

Neptune is the great dissolver. It loves dreams, hates boundaries, and next to September’s full moon in Pisces, its slippery vibes are only amplified. Pisces is mutable sign, and its ability to flow in every direction with ease is the right mindset to inhabit under these cosmic conditions. Under a full moon in Pisces in cahoots with Neptune, it’s far more conducive to your sanity to focus on the journey over the destination.

With such a potent Piscean lunation upon us, water-related metaphors are the way to go. Much like the futility of fighting the ebb and flow of the sea, pushing your will only leads to frustration. For more information on where this transit affects your personal birth chart, read for your rising sign in NYLON’s September 2022 Horoscope. Until then, let go and let God.