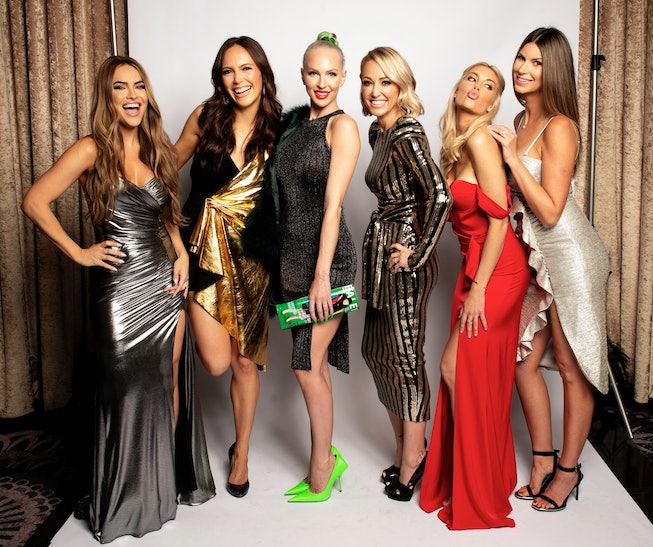 It’s been more than a year since the greedy execs at Netflix have gifted us new episodes of Selling Sunset, the tantalizing reality TV show about the drama-filled professional and personal lives of real estate agents pedaling multi-million dollar homes to Angelenos. The end of Season 3 left us with so many questions: Will Davina ever sell that$75 million house? Will Chrishell ever get over her This Is Us ex who told her he wanted a divorce over text? (Spoiler alert: She’s dating her short king boss Jason Oppenheim now!) Will Christine wear only black leather maternity clothing? Will Roman ever say more than 10 words in a single episode?

While we eagerly await Season 4 of Selling Sunset, here are nine shows to binge that blur the boundaries of workplace and personal dramas.

This Bravo show follows the lawless lives of servers and bartenders who work at SUR (Sexy Unique Restaurant for the uninitiated), the West Hollywood restaurant owned by Real Housewives of Beverly Hills star Lisa Vanderpump. As one of Bravo’s most beloved, binge-able series, it even has the Rihanna cosign. Best of all? There are nine seasons full of some of the messiest, unforgettable drama caught on camera with Shakespearean-level tragic figures and more partying than you thought was humanly possible.

A spiritual precursor to Selling Sunset that premiered more than a decade earlier, Million Dollar Listing follows the lives of (mostly male) luxury real estate agents in Malibu and Beverly Hills as they drive fast in sports cars, sell houses with wine fridges the size of my apartment, and stand around in expensive suits arguing at open houses.

While most reality shows create emotional drama but making a bunch of people live together, the beauty of Below Deck is that the crew members of luxury yachts during charter season already live together. Combining confined spaces, a potential for physical and emotional danger, and the fact that nobody can leave for days at a time — Below Deck has the ideal conditions for a workplace reality TV show that shows us how messy it is to live and work and date on a vessel in the middle of the ocean.

Two best friend realtors move to the Hamptons to sell extravagant beach houses to rich people looking for second homes, in this show where everyone involved thinks the stakes are high, but we don’t actually have to feel any stress for them because at the end of the day everyone is already extremely successful. Get ready for petty coworker drama and buyers who aren’t impressed with a less-than-perfect ocean view!

One of the original reality shows that tackled emotional entanglements inside and outside the workplace, The Hills follows Lauren Conrad and Whitney Port as interns at Teen Vogue as they fill in for rogue models who don’t show up, fix Lady Gaga’s outfit in her first TV performance, and share a desk with now-Glossier CEO Emily Weiss. What a time!

Houses that look like traditional homes in suburban enclaves from the outside are revealed to have absolutely wild interiors like floor-to-ceiling fish tanks, backyard roller coasters, waterfall units and automatic turntables for sports cars, in this Netflix show that may inspire you to fully demo the inside of your house.

Real Housewives of Beverly Hills, and its dozen other assorted spinoffs, also known as possibly the most addictive reality TV series of all time, will certainly will keep you entertained with its approximately one million episodes that follow the chaos-filled lives of women entrepreneurs, influencers, and former actors all turned reality TV stars.

This reality show follows the life of Julia Haart, who, seven years ago, left the ultra-Orthodox Jewish community and eventually became the CEO of Elite World Group. The show follows the day-to-day of Haart’s career as she works to boost the careers of models and oversee fashion shows, while also following the burgeoning careers of her four kids — who, with a Tribeca penthouse, their own reality show, and more than a million followers between them— may give the Kardashians a run for their money.

This show follows celebrity stylist Jason Bolden and his interior decorator husband Adair Curtis, and their design firm that caters to celeb clients like Serena Williams, Ava DuVernay, and Janet Mock. Marital squabbles, ginormous kitchen islands and red carpet dresses? What else could we want?