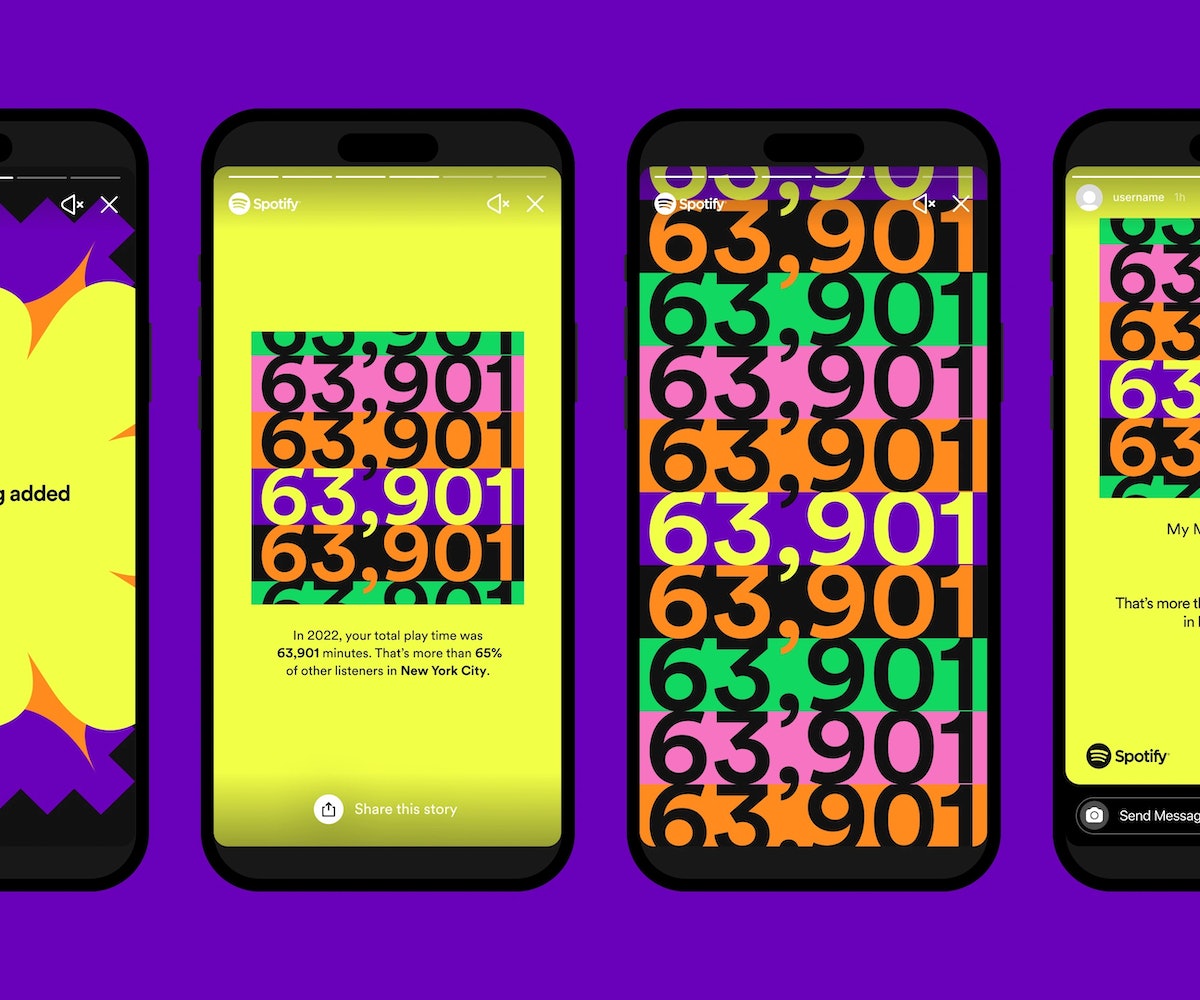 My holiday season doesn’t kick off with department store window dressings or peppermint lattes or a staunch devotion to all things Mariah Carey, but with the release of Spotify Wrapped. It is a holiday for not only music lovers, but for anyone invested in any form of self-mythologizing. (This year, it even illicited a horny text chain that is only reserved for the most mainstream of holidays.) It is the only gift from a tech company I am not only willing, but frothing at the mouth to accept. Spotify Wrapped is a psychic evaluation and a time capsule, both the ultimate gift and gag. Why? Spotify Wrapped is the only social media that doesn’t lie.

Spotify Wrapped isn’t my favorite day of the year because I want to flex a specific music taste or scout potential soulmates who share similar taste as me, but because it is the only day in which people are their true selves on social media. Everyone is a liar on social media; that’s the whole point. (That’s why it’s fun!) It’s 2022 and I don’t need to tell anyone how social media has made us all experts in the field of personal branding, and as our personal brands become hyper-specific, the more lies we’ll tell to fit those brands.

So what happens when Spotify Wrapped drops? With its high-contrast colors and hyper-personalized takeaways (there are, after all, more than 5,000 genres, according to the app), it is designed to be shared on social media. People want to share Spotify Wrapped, but a strange cognitive dissonance occurs when their songs and artists don’t necessarily align with their own idea of what their personal brand is. Spotify Wrapped reveals the vast valley between how people want to be perceived and who they really are.

That is one reason why people shamefully justify their lists: i.e. “I had a breakup!” while other people self-pathologize: i.e. “Spotify knows I’m depressed!” or why, in my least favorite reaction, double down on how “them” the list is,” peppering their posts with “It me!” As if the list wasn’t generated by data.

But people love to gatekeep taste — and music is notoriously the biggest way people like to do this. Just watch, like, one scene of High Fidelity or ask any of my exes. In the first years of Spotify Wrapped, which launched in December 2016, before I worked through the internalized misogyny that kept me from enjoying artists like Taylor Swift and Lana Del Rey (who are both in my top 5 this year, because I am evolved), I felt hesitant about sharing my list. I wished I could edit it; to showcase Pavement and not Ariana Grande. But Spotify and its data, unlike people, don’t lie.

Spotify Wrapped gives me insight into people in the same vulnerable, titillating way learning who everyone in your class has a crush on. So, yes maybe listening to “All Too Well (10 Minute Version) (Taylor’s Version)” 75 times feels uncharacteristic; but it’s just as much a part of you as everything else you listen to. (Maybe more.)

You might want to come off as a sad bisexual Phoebe Bridgers stan, but too bad. Your numbers reveal you’re a pop girl at heart. And all of it is okay: Spotify Wrapped is a celebration of the multitudes we contain. It actually frees us from gatekeeping taste, from the scourge of personal branding that social media asks of us. And that’s where Spotify Wrapped becomes an exercise in radical self-acceptance. Just ask this girl: