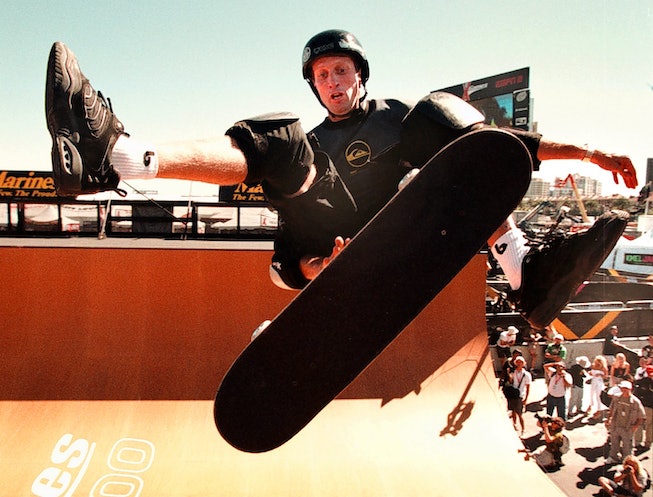 We’re all too used to seeing Tony Hawk on our TV screens. Anyone who grew up in and around the 2000s was likely in contact with “Tony Hawk’s Pro Skater” video game at one point, where you get to maneuver Hawk’s tiny body into impossible skating contortions. Now, he’s back on our small screens again; this time, in a new documentary. Until The Wheels Fall Off, which premiered April 5 on HBO Max, is chock-full of never-before-seen footage and interviews with Hawk and other skating legends, including Stacy Peralta and Rodney Mullen.

If the trailer is any indication, we’re going to get to the heart of Hawk, both the psychological underpinnings that attracted him to skating in the first place, and what compels him to keep skating well into his 50s. “I always felt a little misplaced,” Hawk admits in the documentary trailer. “But I’d found this thing [skateboarding] that I loved and I had so much more to prove.”

The doc follows a lesser-known side of Hawk’s career — tracking his life as an outcast whose mom would call him “our little mistake,” to the most famous skateboarder of all time, but focusing on some of the bumps (both literal and metaphorical) along the way. (Which, turns out, involves a lot of falling down.)

“It is not only about my life and career, but also about the essence of skateboarding,” Hawk said of the film in a post on Instagram. “There are strong themes about being an outcast, getting bullied, forging your own path, not giving up, the trappings of success and ultimately the price you pay — both physically and emotionally — for being singularly focused on something.”

Hawk has recently been riding the Y2K resurgence wave, alongside Avril Lavigne, a long overdue appreciation of Pamela Anderson’s style, and, regrettably, Ed Hardy. In June, Lavigne made her TikTok debut with a video of Hawk skateboarding while Lavigne lip-syncs to “Sk8er Boi,” in what was a tiny gift for my inner child.

Alongside the Hawk doc, there’s a slew of other Y2K docs, tackling subjects like discrimination at Abercrombie & Fitch and the rise and fall of Von Dutch. It’s comforting that the well-oiled gears of the 20-year trend cycle don’t just bring back things like butterfly clips and blue eyeshadow, but give us a much-needed, more clear perspective on culture.

Until The Wheels Fall Off is streaming on HBO Max now. Watch the trailer, below.