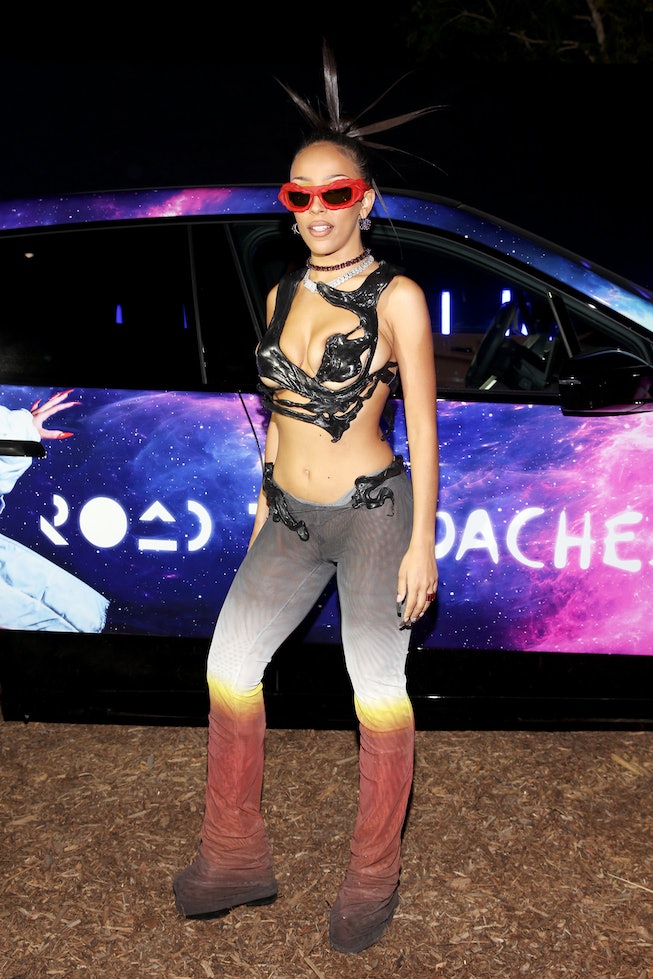 Coachella has made a triumphant return this year and has brought with it the highly anticipated, often divisive, art of festival beauty. Bring on the colorful hair, the face gems, and wild (yet practical) updos. Thankfully, for those who can’t attend in person, our favorite celebrities are keeping our social media feeds packed with their head-to-toe Coachella looks— often featuring both outfit and hair and makeup changes multiple times of the day, to take them from the bright desert days to cool party nights.

Now that the festivities have concluded we can say 2022 is the year where Coachella became more casual, as celebrities like Hailey Bieber and Kendall Jenner chose to wear jeans and influencer Devon Lee Carlson wore a low key t-shirt and baggy skirt combo. Thankfully, the festival beauty has carried the annual festival’s signature over-the-top style and we’ve been served some major summer hair and makeup inspiration. So, whether you're watched the show from the Coachella 2022 live stream, or just staying up to date on the looks via Instagram, we’re keeping track of the best celebrity beauty looks of Coachella 2022 so that you don’t have to.

Doja Cat has outdone herself with her Coachella on-stage beauty this year, but it was her hair for the Spotify party that was the star of the show. This spiky style is giving us major Y2K vibes.

Hailey may have dressed casually this year, but her beauty look for the first weekend was a standout. This marine blue under-eye eyeliner, baby braids, and yellow nail polish combo is definitely something we’ll be attempting to replicate.

Megan’s “hottiechella” silver cat eyeshadow and matching silver nails combo was one for the history books.

We’re loving Billie’s hair being back to black and pulled back into a ’00s style updo. Her black kohl tight-lined eyes add the perfect grunge element.

For weekend two, Billie’s on-stage space buns were topped only by the fact that Paramore’s Hailey Williams joined her up there.

Storm Reid’s looked so sweet in a loose side braided hairstyle and a candy-colored French manicure.

We can’t stop thinking about Bret’s high half-up, half-down ‘do from day one.

Our favorite from the Euphoria crew went for mismatched pink and green eyeshadow, pigtails, and lip gloss for a playful Y2K look.

The queen of Coachella came back with a bang and some voluminous, festival-ready curls.

Chloe’s high gloss lips with Y2K brown liner are officially on our summer mood board.

Lizzo captioned her Coachella photo with “SHITTED ON EM”, which—judging by her all-pink outfit matched with fluorescent pink eyeshadow and blush—is entirely accurate. Not to mention her incredible 3D chrome manicure.

Princess Nokia opted for a slicked side-part this year for a sophisticated festival look.

Normani went for a full on Y2K look, including spiky space buns and tendrils with her camo miniskirt and belly button piercing.

This article was originally published on April 18, 2022