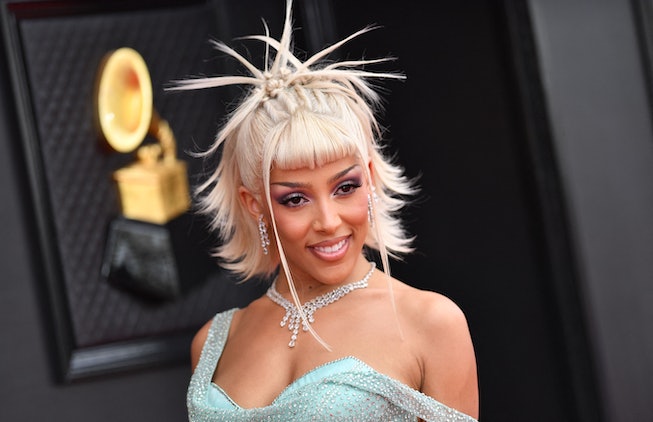 Just one week ‌after this year’s Oscar Awards officially brought back prom hair, the 2022 Grammy Awards gave us the return of prom hair’s punky little cousin — the spiky updo. Unlike the soft curls and wispy pieces that are signature to the prom-like upswept styles, the spiky updos of the late ’90s and early aughts had a much sharper look. Think: blunt bangs, straight, flat-ironed, or gelled hair, and absolutely gravity defying styles.

The revival of spiky hair is in keeping with 2022’s preoccupation with all beauty trends from the late ’90s and early ’00s. We’ve seen everything from snap clips and butterfly clips to black hair streaks return, so it’s no surprise another quirky style would rear its head for spring and summer. The original patron saints of the Y2K era spiky hair were Gwen Stefani in the No Doubt heyday and Pink, both of whom also upped the punk quotient on the hairstyle with a similarly rebellious hair color, like bleached blonde or, well, pink.

Doja Cat was the first Grammys red carpet arrival of the night to wear the throwback style with a pointy, blonde half-up look. She later doubled down on the trend by sporting another hairstyle featuring strongly gelled strands sticking out from a high bun. But she wasn’t the only one — hair trendsetter Billie Eilish, Charlotte Lawrence, and more tried out different spiky styles, solidifying it as a trend to watch leading into the new season. Below, here are all of the celebrities that made spiky hair happen once again at the 2022 Grammy Awards.

Doja Cat’s platinum blonde, spiky half-up, half-down look with baby bangs is what manic pixie dreams are made of.

Later in the evening, Doja Cat won the Grammy for Best Pop Duo/Group Performance with SZA for “Kiss Me More” in another pointy look.

Billie’s take on the trend was the most classically reminiscent of the early 2000s pop stars.

Charlotte’s braided bun gets the Y2K treatment with a few random strands poking out of the tight style.

NEXT UP
Beauty
The Best Beauty Looks From The 2023 Grammy Awards
Beauty
No One Does #PamCore Beauty Better Than Pamela Anderson, Herself
Beauty
Charli D’Amelio and Landon Barker Wore His & Hers Goth Manis To The Grammys
Beauty
Dua Lipa’s ’90s Updo Is Hair Inspo For Your Next Night Out
Style + Culture, delivered straight to your inbox.