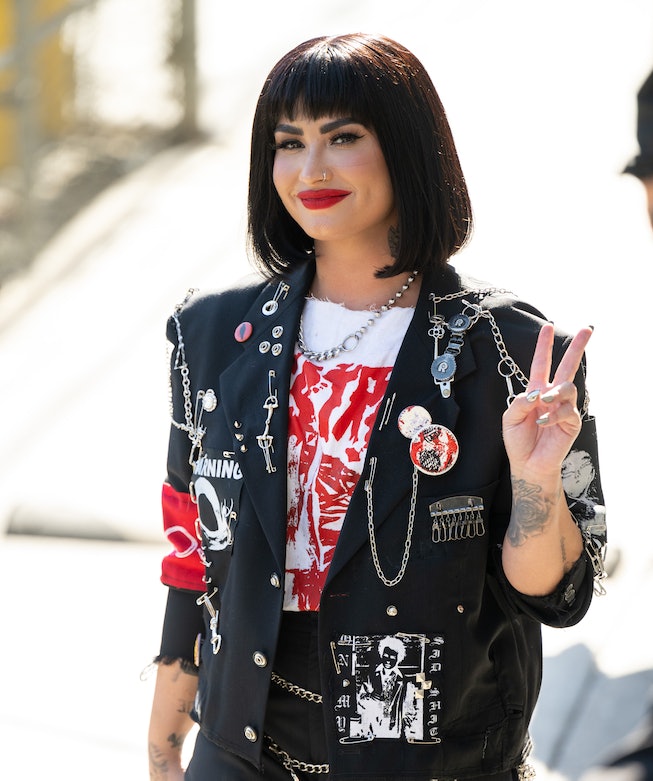 For her current Holy Fvck Tour, Demi Lovato has really been channeling their inner goth— and not just when it comes to their new hard rocking songs. The singer has recently been wearing every signature punk beauty look, from sweeping side bangs to messy pigtails, and thick black eyeliner to red eye shadow. Now, Demi is taking that on-stage goth glam to the next level. On October 18, she was spotted while arriving at the Beacon Theatre in New York wearing a distinctly rebellious teardrop eyeliner. Arriving at the iconic Upper West Side venue in preparation for her New York show, Demi also wore an all-black outfit, brought together with their heavy eye makeup and a nose ring.

Demi’s goth teardrop eyeliner brings her on-stage energy off-stage, keeping the drama even when they are not in their vinyl concert wear. It’s also a similar makeup look to the glam for her São Paulo show. Posting another goth tear drop look at the beginning of last month, Demi wore a black spiky choker and chained black dress. “São Paulo you were unbelievable 🖤,” they wrote as the Instagram caption.

While Demi’s recent exploration into different shapes of heavy eyeliner definitely makes their eyes the main event of their makeup looks, in her latest New York look she also combined blush, bronzer, and a glossy neutral lipstick for an effortlessly natural base. Their jet-black hair was worn with a sweeping side fringe, channeling her Camp Rock beginnings, but adding more of an emo edge.

Goth fashion and beauty have made a major comeback recently, with Halsey, Bella Poarch, and Phoebe Bridgers channeling the aesthetic in all-black ensembles on (and often off) the red carpet. This year’s VMAs was also full of goth-punk beauty moments, including Lizzo’s black lipstick and Lil Nas X’s metallic cat-eye eyeliner. It’s clear Demi is also currently feeling the current gothic vibes as a return to form, being a pop punk icon in their own right. With her tour ending in Texas at the beginning of November, we hope the on-stage goth makeup continues off-stage.