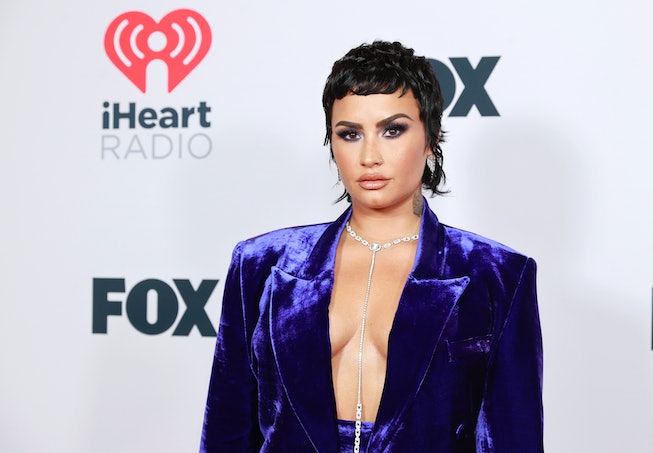 There’s nothing like that fresh ink feeling. On August 25, Demi Lovato got a new hand tattoo, immediately heading to social media to show it off and explain its lyrical meaning. In a series of Instagram Stories, the “Dancing With The Devil” singer debuted the new ink with a close up video of their hand and a glamorous selfie. Demi was certainly feeling themself as they posed with their tattooed hand resting on their face, with a chic, short black manicure.

Demi has had quite a busy year, between releasing a new documentary on YouTube, promoting a new album, announcing an upcoming UFO hunting show, and launching a podcast. But it’s been a minute since they debuted a new tattoo to the public. Demi is no stranger to ink, with over 23 tattoos to date and they have just added to the collection with this new hand tattoo.

Demi’s tattoos usually are imbued with great meaning, and this one appears to be no exception. However, this design seems to have a straightforward interpretation, as the tattoo draws inspiration from the song lyrics for “Infinite Universe” by Beautiful Chorus. It reads, “Love will live forever in the infinite universe”. The lyrics are surrounded by several stars and planets and a crescent moon on Demi’s middle finger. Demi credits Los Angeles-based tattoo artist Dr. Woo for the new tattoo.

This is Demi’s second large hand tattoo, as they also have a large lion tattoo symbolizing their astrological sign, Leo, on their left hand.

Demi captioned the full reveal video of the tattoo on their stories with, “THANK YOU @_dr_woo for making exactly what I asked for!!! It’s perfect!!!” They are clearly over the moon (pardon the pun) with their new ink.

Beautiful Chorus also appears to be excited about being permanently memorialized on Demi’s hand. The group reposted Demi’s tattoo reveal to their Twitter account, captioned with a black heart. The group has even added a “Demi” highlight to their Instagram.

The timing of this tattoo comes right after Demi’s 29th birthday on August 20. Seeing as the tattoo includes a small Saturn design, we can only speculate that perhaps they are also thinking about bracing for their Saturn return. But even if not, this message of love is a beautiful commemoration of their 28th year.

NEXT UP
Beauty
Halloween Cat Makeup Ideas, From Easy to Inspired
Beauty
It Looks Like Grimes’ Body Modification Journey Has Begun
Life
Grimes’ ‘Book 1’ Includes A Collaboration With The Weeknd
Beauty
TikTok Wants You To Wear Mascara Anywhere But On Your Lashes