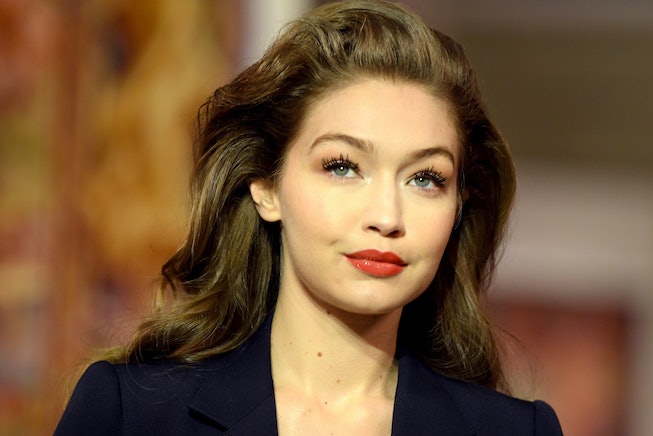 Gigi Hadid is welcoming the winter snow with a fresh haircut. The new mom shared a selfie on Instagram on Wednesday, December 16, debuting a trim that came with curtain bangs.

Cozied up on a couch, Hadid posted a post-haircut selfie, writing, "fresh snow fresh cut." As her hair was pulled into an updo for the photo, it's hard to tell whether Hadid lost any length to her hair, but it is clear that she now has curtain bangs.

The cut — which Hadid attributed to hairstylist Alie Hernadez — came with a collection of soft, wispy, face-framing bangs. Parted down the middle, her curtain bangs hit just below the eyebrow, and then appeared to extend in length as the style reached her ears. She kept the rest of her look casual, and paired the new hairdo with a pair of gold hoop earrings, a matching necklace, and a white top.

Selfies from the model have been a rarity since the birth of her daughter. Both of her last photos featured Hadid with longer hair, and she hid much of the style under a black beanie.

Bangs have been a celebrity constant throughout 2020, with Bella Hadid previously debuting a DIY set. As for the curtain style, Ariana Grande debuted a similar look for a recent music video, and according to recent Google search data, there's been an increased interest in searches related to styling curtain bangs.

See how Hadid styled her curtain bangs, below.