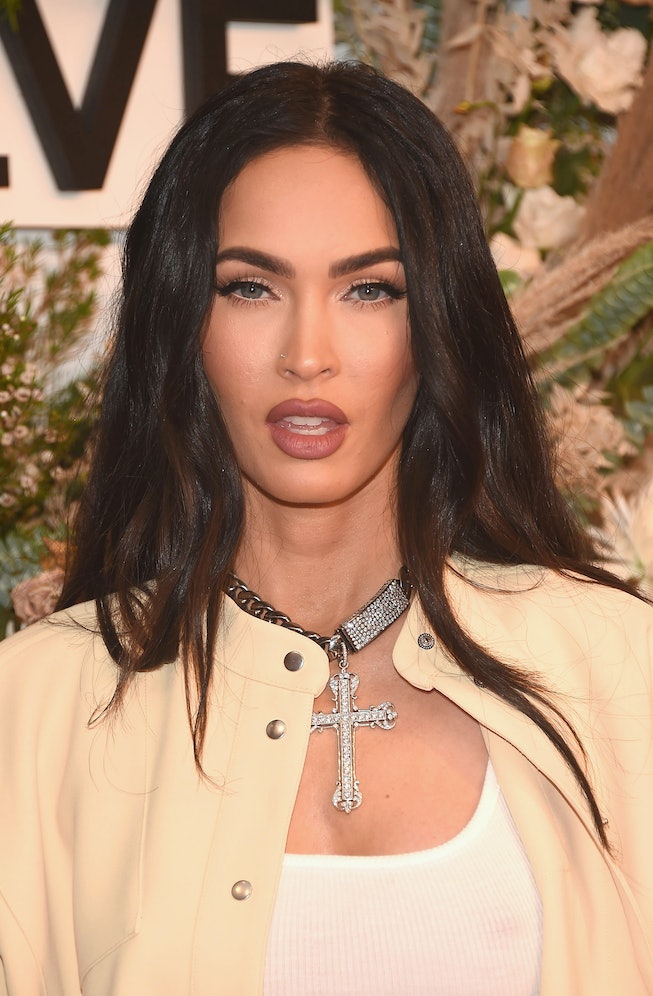 Part of what has made Megan Fox such an icon over the past 20 years is the fact that she has something of a signature look. Often imitated, but never replicated, she’s known for her long, dark hair, arched eyebrows, black liner, and often over-lined, rosy lips. However, since she started seeing MGK back in the summer of 2020, she has clearly entered a new phase of beauty and fashion experimentation. If nothing else, the duo’s couple dressing has forced her to take some risks. From their coordinated under-the-sea themed looks at the 2021 MTV VMAs to literally being chained together at the pinky nail for the launch of MGK’s new nail polish line UN/DN LAQR, the style envelope is certainly being pushed.

Except for an occasional vampiric red or burgundy lip, Fox doesn’t typically wear a lot of bold, “notice me” colors when it comes to her makeup. That’s why it was such a surprise on Thursday, January 27, when makeup artist Jenna Kristina shared an Instagram photo of Fox wearing neon orange eyeshadow. It seems even our favorite goth girl cannot resist getting on the Euphoria-inspired makeup train. Rather than just sweeping the bold shadow across Fox’s lids, Kristina distinctly concentrated the pigment on the inner corners of her eyes, floating above her crease. Her black liner is also softened, leaving more focus on her lashes. Per Kristina’s caption, she was inspired by Fox’s extra long and pointy tangerine talons, which were done by nail artist Brittney Boyce. It’s a perfect match.

While it’s out of the ordinary to see such a bright look on Fox, that’s one way to know that the neon eyeshadow is well on its way to being everywhere this spring. Different iterations of neon shadow were already spotted all over the SS22 runways, and now the trend is picking up more speed. At Versace, all of the models including Dua Lipa (in an electric green and turquoise shadow combo) walked the runway in two-tone neon looks. At Prabal Gurung, some models wore finger paint-like smudges of pigment in the corner of their eyes, while at the Chloé show, the neon makeup took the form of extreme eyeliner. So, there’s never been a better time to go for the dayglo. When Megan Fox starts to lighten up her eye shadow to vibrant shades, it might be your sign to invest in some neon shadows, as well.