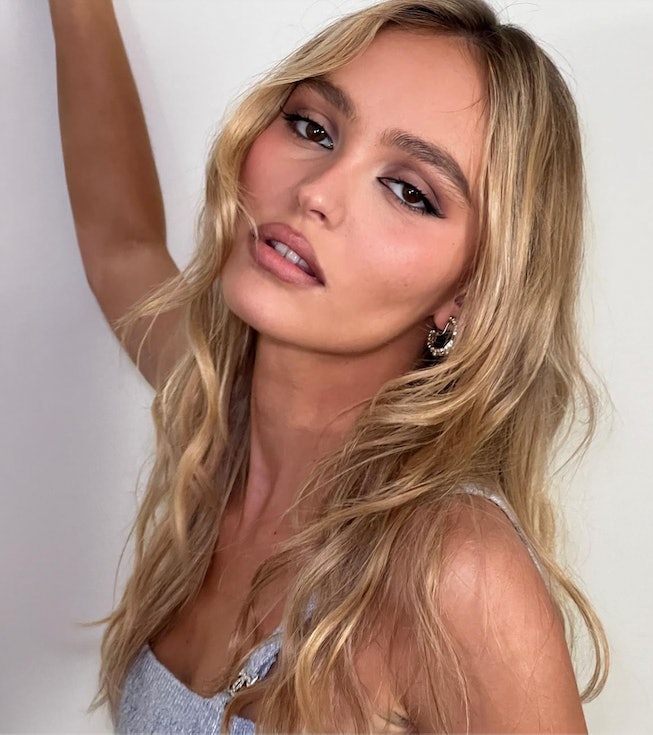 Forget actors, pop stars, and It girls. Recently, a new category has been added to the celebrity trendsetter circle and its members are taking over. This is the age of the“nepotism baby”. AKA the famous child of an already established celebrity, a nepotism baby enters the celebrity scene upon birth and already have a leg up in whatever industry they want to break into. Think: Hailey Bieber, Zoe Kravitz, Iris Law, and Lily-Rose Depp— all of whom have famous parents, and all of whom the internet loves to cover breathlessly. Some nepo babies have come under scrutiny lately because of how they sometimes obliviously depict their own journeys in the entertainment industry (not to mention the concept of nepotism itself can be problematic as its rooted in white systems of power), but regardless of how you feel about them, the public fascination only seems to be growing. The TikTok hashtag #nepobaby currently has over 84.5M views. Whether it’s their red carpet beauty moments or paparazzi-snapped outfits from their night out, we’re watching many of these nepo babies grow up before our eyes, becoming more comfortable with their own style and beauty choices and serving up some serious inspo for the rest of us with non-famous families.

Ahead, a guide to the beauty aesthetics from nepo babies that are already ruling your TikTok feed.

Lily-Rose Depp is a nepo baby who embodies the quintessential chic and effortless European style (influenced by her mother, French actress Vanessa Paradis). As a face for Chanel, she usually keeps it classic on the beauty front, but loves a graphic, mod-inspired liner moment to add a sultry edge.

Iris Law is the ultimate cool-girl Brit—there’s not a look she wouldn’t try no matter how colorful or daring. Her most current signature beauty aesthetic is defined by her decision to shave her head down to a platinum blonde buzzcut, which she dyes, spikes, and shaves into interesting colors and shapes for an every changing look.

Maude Apatow has emerged as a rising star in the world of acting with her role as shy girl Lexi Howard HBO’s Euphoria. In addition to her talent as an actress, Maude has also developed a signature beauty look that invokes Old Hollywood glamour, complete with a short finger-waved bob and a matte red lip. In a video for Vogue, the actress said she uses the Laura Mercier Velour Extreme Matte Lipstick to achieve her signature ruby red lip color.

Perennially influential Zoe Kravitz inspired Black girls everywhere to try out her long, undone micro-braids (also called goddess braids) when she sported the look in 2021. After starring as Selina Kyle in 2022’s The Batman, Kravitz switched up her look to sleek and short styles, like the slicked-back bun, which is a look that has been a signature for Black women for decades.

Bella Hadid might just be pop culture’s most talked about nepotism baby, even spawning a viral TikTok sound where people make fun of themselves trying to mimic her level of perceived perfection. She’s found her niche reviving Y2K beauty trends to her millions of followers, including skinny eyebrows, glossy lips, and ’90s hair accessories.

Trendsetting runs in the Hadid family. Gigi Hadid has been ruling the fashion scene for years now, known for her signature long, champagne-colored locks and sun-kissed skin. Though she doesn’t shy away from a bold beauty look (see: her Met Gala looks from years past), for everyday, she keeps her makeup simple and natural, preferring warm bronze tones over bright colors.

As part of the Kardashian-Jenner clan, Kendall Jenner came into the spotlight as a pre-teen and since has carved out a name for herself in the modeling world. Her signature look usually involves a soft glow and lined lips, but as a high fashion model, she sometimes dabbles in more editorial beauty looks. For the 2022 Met Gala she switched up her appearance entirely with one biggest (and most divisive) beauty trends of the year: bleached brows.

Gleaming-skin queen Hailey Bieber might be the biggest beauty trendsetter of 2022. Her “glazed donut” nails and skin care took the beauty community by storm. She also loves to rock a glazed make-up look on the regular, featuring glowing highlighter, shimmery lids, and glossy brown lips.

Lori Harvey is a beauty girl after our own hearts, even launching her own skin care line earlier this year, SKN by LH. She’s known for her sleek, versatile, and understatedly-glamorous beauty aesthetic. With her a short dark brown bob and glowing complexion, she always looks equally ready to walk a red carpet, step off a jet, or star in a skin care campaign—at any moment.

Following in her supermodel mother’s footsteps, Kaia Gerber has found her place on the runway. She consistently works with Celine, but has also walked the runways for Prada and Alexander McQueen amongst other brands. Her tousled long bob paired with simple, neutral makeup, makes her a modern natural beauty icon.