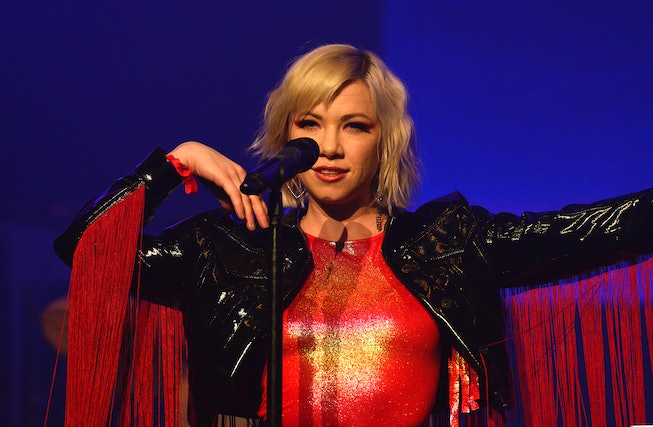 A year and a half ago, Carly Rae Jepsen blessed us with Dedicated. Exactly a year later, she blessed us again with Dedicated Side B, an album of B-sides that didn't make the original cut, which happened to be just as good, if not better, than the original. Now, a mere five months later, the "Call Me Maybe" queen is coming back to bless us a third time — and this time, she's delivering us a special holiday gift: her new Christmas single.

Titled "It's Not Christmas Till Somebody Cries," the new single, which she announced earlier today on Twitter, will arrive underneath our Christmas trees this Friday, October 30th, right in time for...Halloween? Odd timing aside, news about any new Carly Rae music is enough to get my heart pumping and my legs uncontrollably moving. And beside, Carly Rae isn't the only diva prematurely dropping holiday music. Several weeks ago, the one and only Dolly Parton released an entire album of Christmas jingles, fittingly titled A Holly Dolly Christmas. It's only right that Carly be given the right to at least drop one song.

Real Jepsies will remember 2015's "Last Christmas," Jepsen's jazzy, saxophone-loaded cover of the popular 1984 Wham! song. Like anything she's ever released, the cover was brilliant and infinitely repeatable. As such, it's no doubt that this Friday's latest release will serve as the perfect introduction to the holiday season — which, again, doesn't really start for at least a few more weeks. If nothing else, this song should hopefully tide us over until the pop songstress is ready to drop the album of new material she recorded entirely in quarantine.

But now that Carly Rae Jepsen is giving me a Christmas present, I'm feeling all the pressure to get her one in return. Does anyone know the best place to buy a sword?

Check out the artwork for "It's Not Christmas Till Somebody Cries" below.