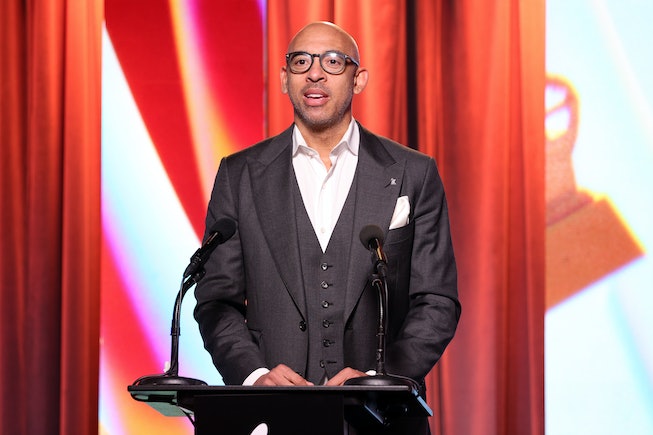 The Grammys can’t stay out of hot water. Following the last few years riddled with controversy and boycotts, the Recording Academy is facing backlash once more for nominating both Louis C.K. and Marilyn Manson — two men who have been accused of sexual misconduct and abuse — in categories for its upcoming 2022 ceremony.

Since nominations were announced Tuesday afternoon, Recording Academy President and CEO Harvey Mason Jr. has responded to the backlash, telling The Wrap that the organization will not “restrict” people from submitting their work for eligibility, nor “look at their personal history.”

He added: “What we will control is our stages, our shows, our events, our red carpets. We’ll take a look at anyone who is asking to be a part of that, asking to be in attendance, and we’ll make our decisions at that point,” seemingly implying that though they’re nominated, C.K. and Manson may not be invited to the physical ceremony come 2022.

“But we’re not going to be in the business of restricting people from submitting their work for our voters to decide on,” Mason Jr. said.

C.K. received a nomination in Best Comedy Album for Sincerely Louis CK, the audio version of his first stand-up special tour after being accused of, and admitting to, several acts of sexual misconduct in 2017. Marilyn Manson’s nomination, on the other hand, is a part of a slew of people nominated as part Kanye West’s Donda, which is up for Album of the Year. Notably, Dave Chappelle, another comedian who stoked controversy this year with transphobic comments with his latest stand-up special, also received a nomination this year in Best Spoken Word Album for his 2020 performance special 8:46 alongside poet Amir Sulaiman. The special aired on YouTube in June 2020, and reflected on police brutality, George Floyd’s death, and subsequent protests, its title in direct reference to the amount of time police officer Derek Chauvin knelt on Floyd’s neck.

Marilyn Manson faced a reckoning at the top of this year in February, when Evan Rachel Wood finally named the musician as her abuser ex whom she’s spoken out about, though never previously identified, including in a testimony before Congress in 2018 in favor of the Sexual Assault Survivors’ Bill of Rights. Shortly after Woods’ reveal, more women came forward accusing Manson of similar acts of abuse, including “love-bombing” them and then “torturing” them by locking them inside rooms, forcing them to take drugs, and more.

At this point, it’s difficult to locate a year when the Grammys hasn’t faced outrage and controversy for either its nominations, snubs, or controversial voting processes. In 2020, The Weekend announced that he would be permanently boycotting the award ceremony for its “corrupt” voting processes, which saw the musician get completely iced out of the 2020 ceremony.

In response to the uproar, the Recording Academy completely revamped its inner voting strategy, including getting rid of its controversial secret voting committees, earlier this year — though it’s becoming clear there’s definitely more dirt in the institution to be exposed.