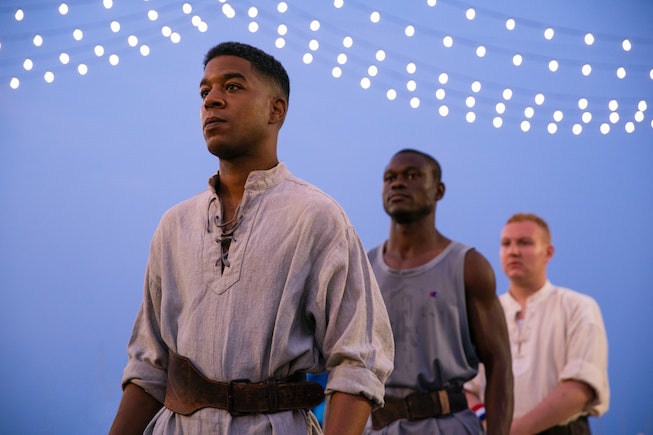 Three months after its launch, WarnerMedia's HBO Max is still going strong (despite the ongoing confusion over its name). The new streaming service has seamlessly blended HBO Originals with its selection of non-HBO content, and its library is only growing bigger by the day. The haul continues in September, too, with plenty of exciting new films and shows coming from both HBO proper and the Max-specific banner.

Personally, I am most excited for the arrival of Unpregnant, a buddy road-trip dramedy starring The Edge of Seventeen's Haley Lu Richardson as an overachieving high school student whose unplanned pregnancy threatens to upend the entire vision she has carefully laid out for her future. Unfortunately, the closest clinic that will give her an abortion is 900 miles away. Desperate for the procedure and determined to keep her situation a secret, she hits up her former best friend and current school outcast Bailey (Euphoria's Barbie Ferreira, in her first feature role), who she eventually convinces to accompany her on a life-changing road trip.

But HBO is also serving up several high-profile new television series, as well. First up is Luca Guadagnino's first small-screen effort We Are Who We Are, which I can confirm feels exactly like what you'd expect a Guadagnino project for television to feel like. Set on American military base stationed in Italy, the series follows a group of teenagers exploring identity, sexuality, and the general hiccups of growing up. Centered on two breakout performances from Shazam's Jack Dylan Glazer and complete newcomer Jordan Kristine Seamón, the series is a mesmerizing peak into modern-day adolescence. And with a cast that also includes perennial it-girl Chloë Sevigny and stoner rap king Kid Cudi, it's safe to assume HBO has a hit on its hands.

There's also Raised By Wolves, a new sci-fi offering from the brilliant mind of Alien's Ridley Scott. In what I've taken to calling "a reverse-Westworld," the limited series follows a bunch of androids who are now in charge of raising human babies after earth as we know it is destroyed by some "Great War." (If Raised By Wolves gets you on a sci-fi kick, you're in luck — Scott's sublime 2012 epic Prometheus is also coming to the service this month.) Or, if you want a different kind of mind-bending trip, try The Third Day, which follows Jude Law and Moonlight's Naomie Harris to a mysterious island whose inhabitants have a very specific way of life.

Also interesting is Coastal Elites, HBO's ostensible answer to Lifetime's Love in the Time of Corona. Described by HBO as "a socially-distanced, comedic satire," the Jay Roach-directed film was originally conceived as a stage play but turned into a TV show when the pandemic caused a universal theater shutdown. Starring a who's who cast that includes Bette Midler, Sarah Paulson, Kaitlyn Dever, Dan Levy, and Issa Rae, the film appears to be a series of individually-shot solo scenes and and will explore "our current world of deeply divided politics and the universal pursuit of human connection."

For non-originals, get ready for Whitney Houston's The Bodyguard, the Al Pacino hostage flick Dog Day Afternoon, my personal choice for Reese Witherspoon's best film Election, the under-appreciated OutKast musical Idlewild, the charming Marsai Martin-led Little (she came up with the premise when she was ten-years-old!), Miss Congeniality (the perfect first film and its completely unnecessary sequel), the Will Smith and Tom Holland-voiced animated feature Spies in Disguise, the failed Oscar-bait Just Mercy (which Jamie Foxx really was robbed for), the excellent film adaptation of my all-time favorite play Who's Afraid of Virginia Woolf?, and this year's Elisabeth Moss-starring The Invisible Man (which I hope will finally net the preternaturally-talented actress the awards love she's long been owed).

But if you check out only one thing this month, I urge you to not sleep on A Hidden Life. After the runaway success of his Brad Pitt-starring The Tree of Life, I was quite surprised to see how little fanfare Terrence Malick's A Hidden Life was met with upon its release last year. A much different film in vision, but one that does a similar job establishing universal themes from a deeply personal narrative, A Hidden Life follows Franz Jägerstätter, an Austrian farmer who refused to join the Nazis during World War II and was eventually ostracized from his community under charges of treason. The cinematography is beautiful, the performances are outstanding — it's Terrence Malick!

See everything coming to HBO Max in September below.

All The Right Moves (HBO)

Cat on a Hot Tin Roof

The Devil Inside (HBO)

Divine Secrets of the Ya-Ya Sisterhood

Father of the Bride

Flight Of The Phoenix (HBO)

Joe Pera Talks With You

A Kiss Before Dying (HBO)

An Officer and a Gentleman

Over the Garden Wall

Over The Hedge (HBO)

A Room With A View (HBO)

Snakes on a Plane

Son of the Mask

Too Beautiful: Our Right to Fight

When We Were Kings (HBO)

Who's Afraid of Virginia Woolf?

The Wind and the Lion,

We Are Who We Are: Drama Series Premiere (HBO)

Fandango at the Wall (HBO)