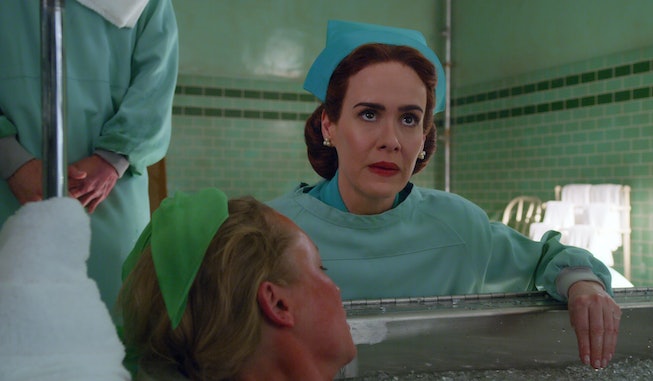 As September rolls around, we still find ourselves in the middle of a pandemic that shows no signs of letting up anytime soon. Which means, yet another month dedicated to endless Netflix binges is in our midsts — for better or for worse. Luckily, the streaming service will keep subscribers satisfied throughout the coming month with a variety of new TV shows, films, documentaries, and standup comedy specials.

September is a big month for Netflix originals. One of the most high-profile releases is I'm Thinking of Ending Things, the latest directorial effort from Being John Malkovich scribe Charlie Kaufman and his first since the delightfully off-kilter 2015 animated puppet-piece Anomalisa. Equally exciting is the arrival of The Devil All The Time, a small-town thriller with a cast stacked beyond my wildest dreams. I mean...Tom Holland, Robert Pattinson, Riley Keough, Bill Skarsgård, Sebastian Stan, Jason Clarke, Eliza Scanlen, and Swallow's Haley Bennett? Sign me up. Immediately.

This month will also bring the premiere of Away, Hilary Swank's latest foray into television, in which the two-time Oscar winner stars as an astronaut who must confront abandoning her husband and daughter as she prepares to take off to Mars. And just in time for Labor Day, Netflix is also debuting two barbecue-themed reality shows: I immediately recommend Chef's Table: BBQ, the latest entry into the prestigious Chef's Table catalogue, which approaches the precise craft behind barbecuing with the same deference the popular franchise has afforded any other cuisine. But don't sleep on American Barbecue Showdown, either, a self-explanatory BBQ cooking competition, which is engaging in all the ways you'd expect a show like this to be.

If you're a Ryan Murphy fan, you're in luck, as the super-producer is debuting two new productions. First up is Ratched, the imagined origin story of One Flew Over the Cuckoo's Nest's chief villain Nurse Ratched, which stars Murphy mainstay Sarah Paulson in the titular role. Later, he will premiere The Boys in the Band, the film adaptation of the groundbreaking gay play he revived on Broadway in 2018. Featuring the exact same cast as Murphy's Broadway revival (which included Jim Parsons, Charlie Carver, Zachary Quinto, Matt Bomer, Andrew Rannells, Robin de Jesús, and more), the film already feels revelatory for using real gay actors to portray gay characters.

September is stacked on the non-originals side, too. If your nostalgia has you craving some teen classics, you can sing along to the timeless anthems from Grease, get high with the stoner blueprint Pineapple Express, or wag your finger at the whole genre with the hilariously raunchy spoof Not Another Teen Movie. Otherwise, prepare to time-travel with the Back to the Future trilogy, get your rocks off with Steven Soderberg's lusty male stripper saga Magic Mike (though not its superior followup Magic Mike XXL), reminisce on the theater with Uma Thurman and Matthew Broderick's hilarious musical sendup of Broadway, The Producers, learn a lesson from Cameron Diaz in the criminally under-appreciated Bad Teacher, or get spooked with the classic 1980s horror film Possession. Or maybe you've just been waiting to cap off your binge of The Good Place, in which case, time to get existential with the excellent final season of the Mike Schur afterlife sitcom.

I'm personally looking forward to the arrival of Sister, Sister and Girlfriends, the latest Black sitcoms to materialize from Netflix's recent haul. (I've been binging Moesha for the past month.) I also can't wait to rewatch Wildlife, Paul Dano's mesmerizing directorial debut about a family that is torn apart by the father's insistence to leave town for better work, the mother's troubling response to his absence, and their teenage son's inability to make sense of any of it. Anchored by a career-defining Carey Mulligan performance that I'm still furious was ignored during the 2019 awards season, it was easily one of my favorite films of 2018.

Then, there's Cuties (Mignonnes), the Sundance Directing Award winner about a young Senegalese immigrant caught between her traditional family values and her desire to join a dance troupe filled with free-spirited young girls. Earlier this month, the yet-to-be-released film was unfairly met with criticism after Netflix advertised it using a misleading poster and description. But after hearing from critics lucky enough to have already screened it at festivals, it's clear that this title — written and directed by a Black woman — is something we should be looking forward to, not advocating against.

Check out a list of everything coming to Netflix in September below.

The Boss Baby: Get That Baby!

Back to the Future

Back to the Future Part II

Back to the Future Part III

Children of the Sea

Not Another Teen Movie

Freaks – You're One of Us

Corazón loco / So Much Love to Give

Get Organized with The Home Edit

Julie and the Phantoms

How to Train Your Dragon 2

The Curse of Oak Island: Season 4

The Devil All The Time

A Love Song for Latasha

American Murder: The Family Next Door