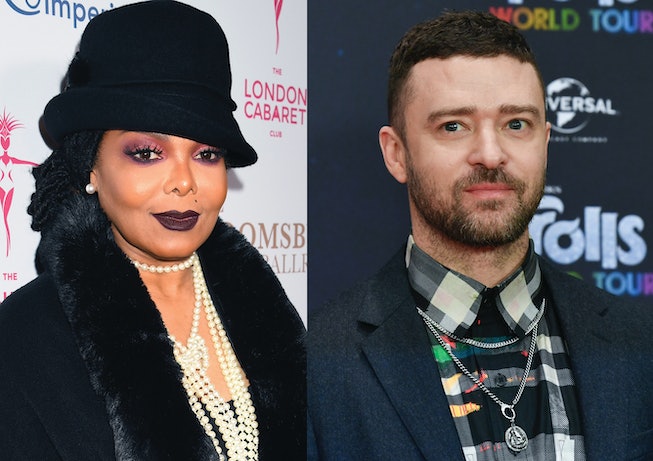 For the first time ever, Janet Jackson opened up about her very public life as a global superstar with her new Lifetime and A&E documentary, Janet. The three part doc (now available to stream on Hulu) covered Janet’s upbringing in Gary, Indiana, her family’s move to Los Angeles to pursue working in the music industry, and her own subsequent career as an actress and highly influential pop star.

In addition to covering scandals from her personal life (like her alleged secret baby, that she confirmed she did not have), Jackson also addressed the 2004 Super Bowl incident that was recently covered by a New York Times investigation. At the time of the incident, the infamous “wardrobe malfunction” that left Jackson’s pasty-covered breast exposed to millions on live television seemed to greatly harm her career reputation, while leaving Timberlake — who did the exposing — unscathed.

In Janet, Jackson set the record straight, saying that she and Timberlake are fine and have both moved on from the incident, which she called an accident.

"Honestly, this whole thing was blown way out of proportion. And, of course, it was an accident that should not have happened, but everyone is looking for someone to blame and that's got to stop," she said.

Speaking to brother Randy Jackson in the documentary, Janet says Timberlake asked her at the time if he should speak out amid the major backlash she was receiving.

"We talked once and [Justin] said, 'I don't know if I should come out and make a statement,'" Janet said. "And I said, 'Listen, I don't want any drama for you. They're aiming all of this at me.' So I said, 'If I were you, I wouldn't say anything.'"

Timberlake issued a public apology in February following the release of another New York Times documentary, Framing Britney Spears. The documentary heavily scrutinized Timberlake’s romantic relationship with Spears and the double standard with which the pair were subjected to upon their breakup. Timberlake’s statement also included an apology to Jackson, saying that he was "deeply sorry for the times in my life where my actions contributed to the problem, where I spoke out of turn, or did not speak up for what was right."