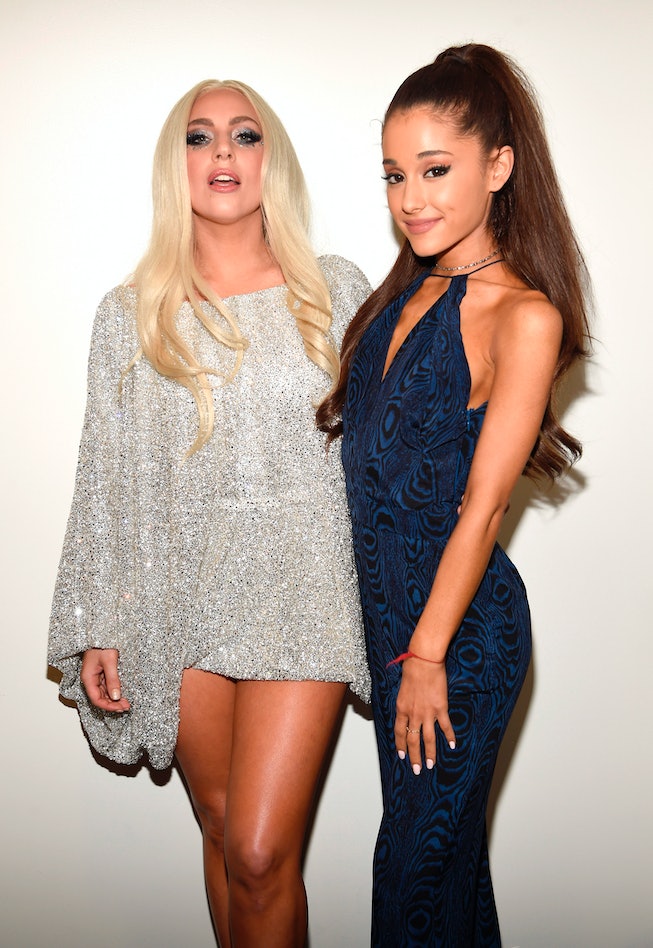 Earlier this year, in Lady Gaga's first Chromatica-centered cover story, it was revealed that the pop star's sixth studio album would include a collaboration with "a fellow female pop star, who has similarly experienced immense trauma while in the public eye." At the time, there was no way to know for sure who said pop star was, but the mention of "immense trauma" did seem to align perfectly with the many rumors about a possible team-up with Ariana Grande (whose 2017 concert at the Manchester Arena became the site of a devastating terrorist attack). Eventually, Chromatica's tracklist confirmed the collaboration, which would be called "Rain On Me." Now, the track has been confirmed as the second official single from the album and will be released at the end of this week, accompanied by a music video that was filmed pre-pandemic.

Since first announcing the single's imminent release last Friday, both Gaga and Grande have been heavily promoting the single. Most recently, the two pop stars shared a new futuristic-looking image alongside cryptic captions that are most likely lyrics from the upcoming sure-to-be hit. Gaga's post made reference to "water like misery" while Grande's post mentioned "teardrops on my face."

In the PAPER story, Gaga referred to the song as a "celebration of all the tears," while reporter Justin Moran described it as a "monster of a dance tune" with a message about "submitting yourself to devastation." Though the story never referred to Grande by name, Gaga did describe her experience working with the fellow Italian pop star, recalling, "I sat with her and we talked about our lives. It's two women having a conversation about how to keep going and how to be grateful for what you do."

Check out promotional images for "Rain On Me" below and prepare for the slayage coming this Friday.