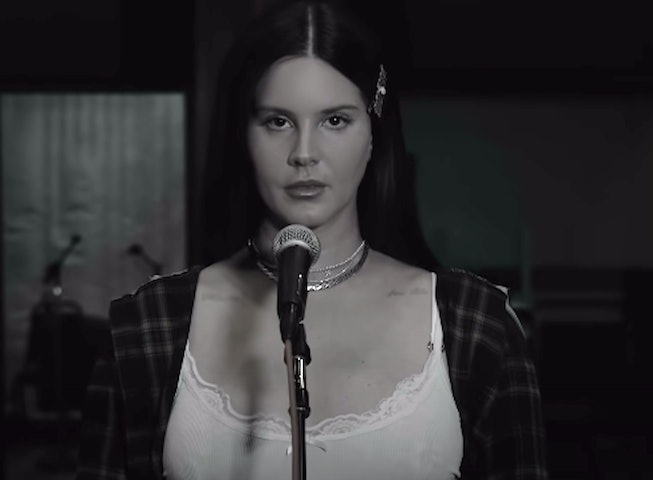 Last Friday, Lana Del Rey released her latest record, Blue Banisters, and to commemorate the release, the singer stopped by The Late Show With Stephen Colbert to perform the album’s second single, “Arcadia.”

Already, the New York-born performer’s eighth studio album (which is also her second this year alone) has been praised for continuing the personal songwriting she began to dip her toes into on this year’s Chemtrails Over the Country Club. So perhaps it was no surprise to see Del Rey dipping into a comparatively stripped-back setting for this intimate live performance.

Rendered in sensitive black-and-white, the performance found Del Rey singing in a sparse room, dressed down in a simple white camisole, cropped black hoodie, and flashy jewelry on her neck, arms, and hands. As she sings about Sierra Madre, angels with halos, and Land Rovers, she looks around the room, eyes darting to the camera and away, closing during long notes only to jut open again in moments of catharsis. Accompanied only by a piano and armed with nothing but her powerful voice and a microphone, the performer sounds electric. (Needless to say, it’s clear Lana has come a long way since Saturday Night Live.)

The Late Show performance follows the star’s recent departure from social media, where she deactivated all of her accounts in order to “just keep [her] circle a little bit closer and continue to develop some other skills and interests.” The decision came at any interesting time for the performer — a little over a month shy of a major album release, rendering her virtually incapable of promoting her new music to her loyal fans. But if the Blue Banisters singer plans to keep delivering television performances this intimately crafted for the foreseeable future, maybe she doesn’t need social media after all. We’ll be talking about her regardless.

Check out the beautiful performance below.