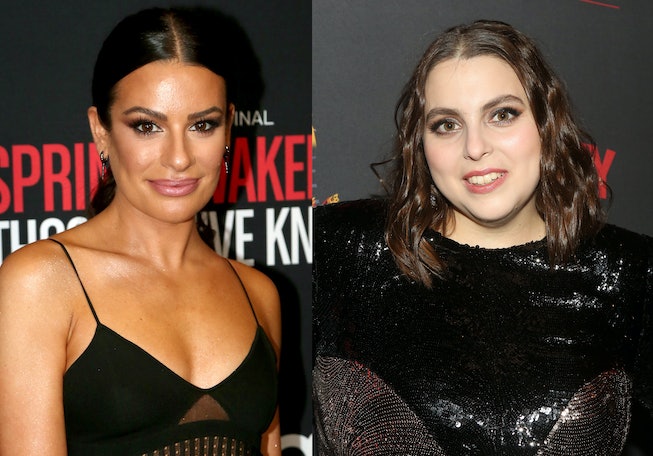 Well, it happened. Years after coming to national prominence as the bossy, musical theater-obsessed Rachel Berry in Glee, actress Lea Michele is finally getting the chance to play the role of her dreams. Earlier today, it was announced that Michele would take over for Beanie Feldstein as Fanny Brice in Broadway’s revival of Funny Girl. And just like that, the prophecy is fulfilled.

Rumors of the switch have been swirling for a while. After receiving mostly negative critiques for her portrayal of the sprightly character famously brought to life by Barbra Streisand almost six decades ago (this one from Vulture, in particular, still lives rent-free in my brain), Feldstein was said to be leaving the production early, alongside her co-star Jane Lynch. The pair would perform their last show at the end of September, production announced in June. Immediately, Broadway obsessives began to fan-cast the next Fanny Brice. Michele, who has long positioned her career as a modern-day reimagining of Streisand’s, frequently came up as a favorite.

Things heated up even more on Sunday night, when Feldstein took to Instagram to announce that she would depart even earlier than the (already premature) September date. “Once the production decided to take the show in a different direction, I made the extremely difficult decision to step away sooner than anticipated,” the Lady Bird breakout-cum-Booksmart star wrote in her text post. “The people I have had the great joy of bringing Funny Girl to life with every night, both on and off the stage, are all remarkably talented and exceptional humans and I hope you continue to join them on Henry Street after I depart on July 31st.”

Shortly after, the official Funny Girl Twitter account stoked the flames by promising some “exciting casting announcements” to come. And today, without further ado, they’ve confirmed the excited speculation: Lea Michele is indeed taking over for Beanie Feldstein in September, with four-time Tony nominee Tovah Feldshuh joining her to replace Jane Lynch. (Lynch will finish out her run through September 25 as originally planned. Julie Benko, the current standby for Fanny Brice, who has performed quite a lot as of late thanks to Feldstein’s recent COVID diagnosis, will take over in the time between Feldstein’s departure and Michele’s arrival.)

Lea Michele’s confirmation feels like a culmination. Not only has the performer, who got her start on Broadway before pivoting to primetime TV on Ryan Murphy’s Emmy-winning Glee, always been a vocal Streisand fan, but she also has a soft spot for Funny Girl, in particular, having performed songs from the Tony-nominated musical on various occasions throughout her career.

Furthermore, much like her single-minded character Rachel Berry, Michele has always had big Broadway dreams. But after falling victim to the Great Accountability Reckoning of 2020 (when Glee co-stars like Amber Riley and Heather Morris supported Samantha Ware’s reports that she had been mistreated by Michele while working on the show), Michele seemed to be at a career standstill. (The Emmy-nominated actress eventually issued an apology, but not before receiving backlash, even losing some brand partnerships, like one with meal-prep service HelloFresh.)

However, thanks to HBO’s critically-acclaimed Spring Awakening: Those You’ve Known, which finds Michele reuniting with her Broadway castmates (like Jonathan Groff and John Gallagher Jr.) for a special reunion concert 15 years later, Michele has been taking something of a redemption tour. (Her admittedly brilliant performance at last month’s Tony Awards surely didn’t hurt things.) And now, she’s capping it all off with a fresh appointment to a role she was, if she could say so herself, born to play. So, you know what? Maybe, sometimes, all you do really need is a little bit of persistence. (Plus, a whole lot of talent. Talent always comes in handy too.)