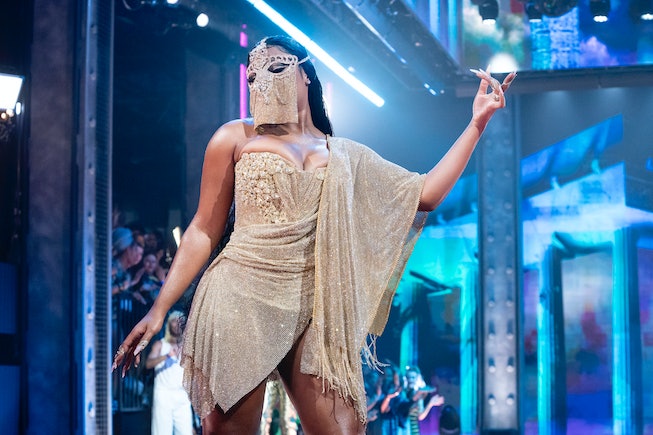 For most television series, the goal has always been to go out with a bang, not a whimper. But according to Legendary, HBO Max’s ballroom voguing competition, which just capped off its excellent first season last week, it can sometimes be just as effective to go out with a whimper — or at the very least, be unafraid to lower the stakes. At the start of its ninth and final episode, “Heaven and Hell,” it was clear that something was different. Gone was the big, screaming crowd; gone were any guest judges and excess trappings. In its place was a comparatively stripped-back set, devoid of outside distractions — just the competitors, the judges, the MC, and the DJ.

As several title cards would later confirm, this shift was not by design, but rather a last-minute response to the novel coronavirus, which had just started to become a real growing concern in early March, when the episode filmed. “The producers of Legendary decided to film the season’s last ball without an audience,” one card noted. And as such, the finale felt like an entirely new show.

But without making light of the ongoing pandemic, it was this rapidfire reaction that proved just how strong Legendary had become. Even without a buzzing crowd, Legendary’s finale was electrifying, a nonstop ride of gag-worthy performances, good-natured shade, and solemn goodbyes; the fanfare was minimal, but Legendary’s final hour was every bit as engaging as it had been since the beginning. Under certain light, this pared-back set-up even felt like a boon. After eight episodes defined by bustling energy and (sometimes distracting) audience interaction, there was something oddly comforting about stripping everything back at the end and redirecting all attention towards the remaining contestants — who, of course, brought it.

But not before a few others brought it first. The finale kicked off with a dance routine by the show’s MC, Dashaun Wesley, and one of its judges, Leiomy Maldonado. The pair — Legendary’s only on-screen personalities with a true background in the ballroom community (aside from DJ MikeQ, who is more often seen than heard) — performed a spellbinding duet, blending the sensuality of tango with the acrobatics of vogue. Clear masters of their art, the performance was a masterclass — controlled yet fluid, executed with the very precision Maldonado so frequently sought from the houses competing on the show. Later on, fellow judge Megan Thee Stallion, adorned in a Victoria’s Secret-sized set of angel wings, took to the stage for a performance of her Billboard chart-topping single “Savage.” Midway through, the beat sped up and a flock of voguers joined her for a full-out voguing interlude, which she even joined in for a bit. It was an appropriately genre-bending performance, one that perfectly merged the rap world with that of ballroom, showing just how malleable vogue can be in the right hands.

But Legendary would be nothing without its competing houses — which, by this time, had been narrowed down from eight to three: House of Balmain, House of Escada, and House of Lanvin. Throughout the competition, all three had effectively separated themselves from the pack, crafting unique narratives for themselves that easily endeared them to both the judges and fans at home. There was Balmain, who were determined to live up to their title as “the main attraction”; Escada, who made it impossible not to root for the underdog; and Lanvin, whose immaculate poise was matched only by their incomparable track record.

But in the end, it really came down to Balmain vs. Lanvin, an intriguingly-matched duel between two very different houses with very different strengths and weaknesses. Who should win: House of Lanvin, the put-together, polished house that dominated the entire competition, winning the weekly Superior House trophy four times — but who the judges feared had maybe gotten a bit too comfortable resting on their laurels? Or House of Balmain, a somewhat scrappier choice, who clawed their way to the top by getting increasingly better over the course of the competition and completely annihilating everyone else in the final hour? It was the kind of pairing that incited passionate debate, with zealous supporters on both sides of the fence. Like the best reality competitions, someone was going to be upset regardless, so it was no surprise when people called foul after Balmain was announced as the winner, nabbing the $100,000 grand prize.

That the series was able to inspire such spirited discourse is, in and of itself, a testament to how masterfully the show constructed its first season. Everything — from its catchy theme song to its inventive ball themes — has worked together to create a truly unique experience. For the past two months, viewers have been treated to stories both heartwarming (Packrat Lanvin gaining a newfound confidence after walking and winning a “body” category for the first time) and heartbreaking (House of Gorgeous Gucci’s loss of a member following a bout of infighting and creative differences). There has been an endless supply of incredible stunts — who will ever forget the moment when Makaylah Lanvin climbed up a scaffold and immediately jumped back straight into a dip? — and no shortage of breakout stars. In the weeks since its premiere, for example, Jazzul Escada and Gorgeous Jarrell Gucci have both developed rabid fanbases for their charmingly handsome looks; that the two have very different body types further proves that there is no singular definition for “beauty” (regardless of what Law Roach may say).

The breakout HBO Max series has already been confirmed for a second season, and judging by the decision to relocate production from middle-of-nowhere Stamford, Connecticut to center-of-the-universe Los Angeles, California, it’s clear that the nascent HBO streaming service believes in the future potential of its inaugural reality competition series. And for good reason, too. Even if producers refused to change anything for round two, viewers would still be guaranteed another nine episodes of consistently jaw-dropping entertainment. But with just a few slight tweaks, Legendary could be even better. It could truly live up to its name.

As for now, the show’s original judging panel — which, in addition to Leiomy Maldonado and Megan Thee Stallion, also includes celebrity stylist Law Roach and The Good Place actress Jameela Jamil — is set to fully return. But while Jamil may have been needed to get the show greenlit when betting on a culture as niche as ballroom still seemed like a risk, one hopes that, now that it has an established viewership, the controversial media figure might take a tip from other celebrities and step down from a role she’s clearly unfit for. And while the guest judges were often the most lackluster part of any given episode — save for Pose’s Dominique Jackson, who blessed us with the now-classic “I am ballroom” quote in episode three, and Tamar Braxton, who brought her trademark sass to the semi-finals — I have no doubt that producers will be able to procure better names in the future.

With these adjustments, as well as a smoother editing process that better showcases the impressive performances, Legendary can continue to grow into the reality TV juggernaut it so clearly wants to be. Since its premiere, the series has introduced the masses to a culture many are still woefully misinformed about — it’s a dip, not a death-drop — in a way that felt entertaining instead of didactic. Pose may have introduced ballroom to TV, but Legendary is offering an inside peek into the inner-workings of real ballroom participants — and that’s what makes it not only unique, but important. I can’t wait to see what’s in store for season two.

Season one of Legendary is streaming in full on HBO Max now.