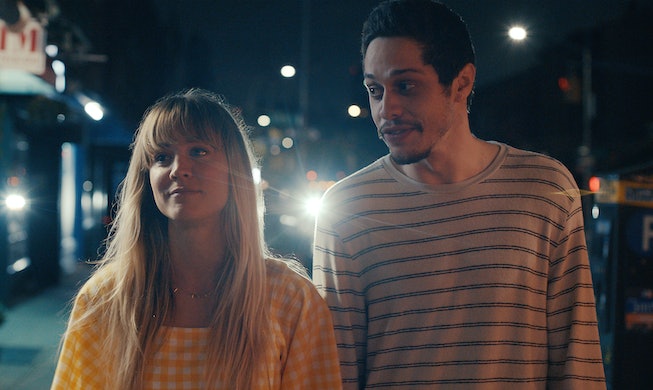 If you ever looked at Pete Davidson’s impressive list of past girlfriends (from Ariana Grande to Kim Kardashian, the former Saturday Night Live player has consistently found love with some of show business’s biggest names) and wondered to yourself, How is it possible that this clear charmer has yet to lead his own rom-com, then boy, oh boy, does Peacock have some great news for you. This fall, the streaming service will debut Meet Cute, a new film that will hopefully, finally answer the age-old question on all of our minds: What, exactly, makes Pete Davidson so damn desirable?

Directed by Paddleton’s Alex Lehmann and written by Noga Pnueli, the upcoming film tells the story of Sheila and Gary, two strangers who find love at first sight after meeting each other. (What? You didn’t think a movie called Meet Cute would be about an actual meet-cute?) Alas, not all that glimmers is gold, as Sheila and Gary’s magical first date wasn’t “fate” at all. As it turns out, Sheila has a time machine — and the two have actually been falling in love over and over (and over) again.

Davidson will be making his rom-com lead debut as the oblivious Gary, while The Flight Attendant’s Emmy-nominated Kaley Cuoco stars opposite him as Sheila. From the looks of it, Cuoco will be bringing some of her trademark Flight Attendant sneakiness to the role. According to a plot synopsis, her character is willing to go do anything to get what she wants: “When the perfect night is never quite enough, Sheila travels to Gary’s past to change him into the perfect man.”

In the trailer for the film, Davidson’s character becomes increasingly alarmed as he starts to realize what’s happening. Watch below: