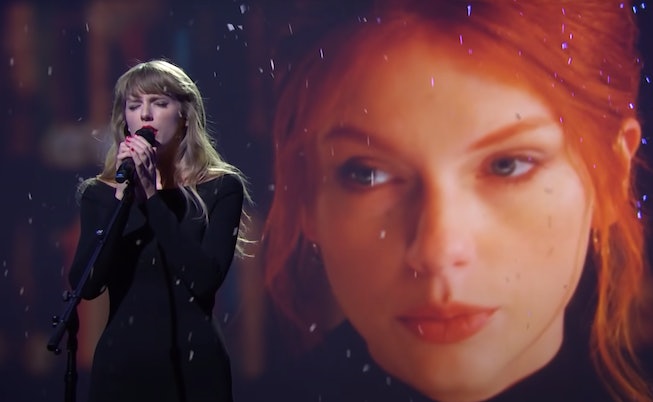 Taylor Swift delivered a dazzling performance of the ten-minute “All Too Well (Taylor’s Version)” on Saturday Night Live’s latest episode. Swift was the musical guest for the late night sketch-show — which was hosted by Lovecraft Country actor Jonathan Majors — and appeared in a skit with comedian Pete Davidson.

Before the episode aired, Swift posted a video on Instagram to promote the show with Majors and SNL cast members Aidy Bryant and Bowen Yang. After Majors and Yang expressed their excitement for the evening, the group made a joke that Bryant wasn’t looking forward to it. “Aidy’s upset because she thinks I wrote the song, ‘You Need To Calm Down’ about her specifically,” Swift said. “Yeah, yeah, I’m sure you just happened to write a hit-song about the phrase everyone tells me all the time,” the comedian responded.

When the show began, Swift made a surprise-appearance in a musical number with Pete Davidson. The comedian invited Swift to sing the bridge in a sketch called “Three Sad Virgins” which made fun of SNL’s new writers, Ben Marshall, John Higgins, and Martin Herlihy. During her verse she playfully teases the trio calling Marshall a “sad Ron Weasley,” who “looks like Big Bird if he lost all his feathers.” She also claimed Herlihy has the charm of a “scarecrow,” and suggested Higgins' head was too big for his frame. Since it’s premiere the skit has racked up nearly 2.5 million views on YouTube.

Later, Swift performed the new version of “All Too Well” live for the first time. The heartbreak anthem was originally written for her 2012 album Red, following her tumultuous breakup with Jake Gyllenhaal. The ten-minute song pieces the story together, with new verses that further explain their relationship. During the performance Swift wore an all black outfit and her signature red lipstick, while accompanying herself on the guitar. As she sang the hit-song the track’s recently released short film, starring Sadie Sink and Dylan O’Brien, was projected in the background.

Following her appearance on SNL, Swift also announced that she’d created a music video for the song, “I Bet You Think About Me.” The singer recruited her long-time friend, Blake Lively to direct the shoot. The track is believed to be a follow up for “All Too Well,” and it was also included in the re-release of Red.

Watch all three videos below: