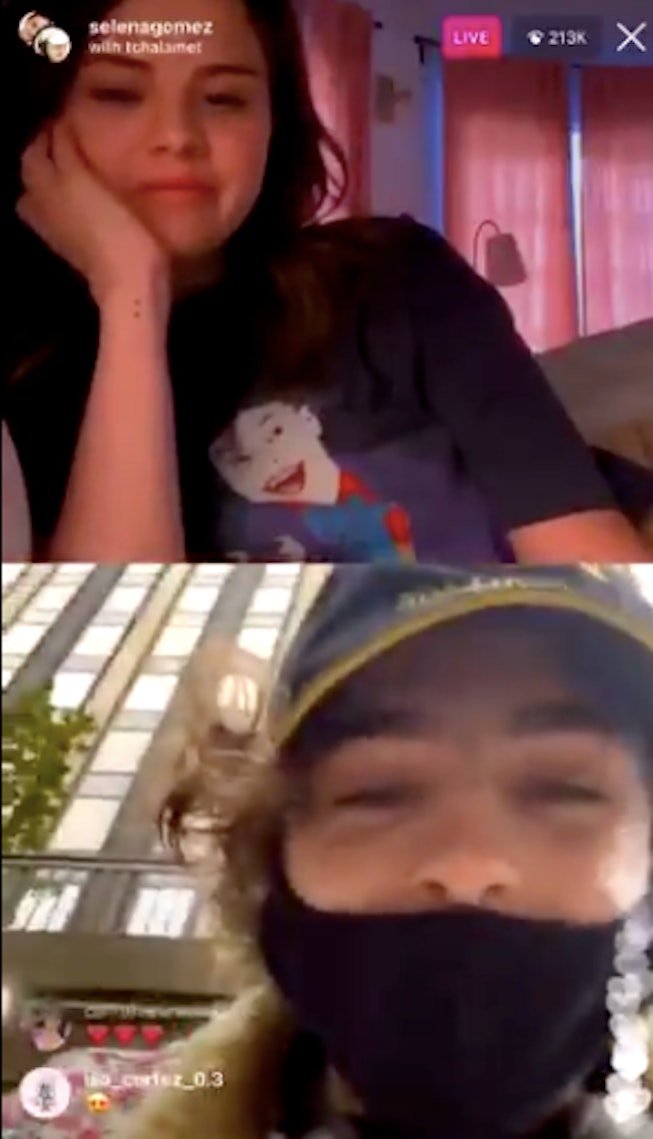 This past weekend, many Americans took advantage of early in-person voting options by heading out to their local polling sites and braving long lines to make sure their voices would be heard in this year's incredibly important presidential election. For months, newly-minted home chef Selena Gomez has been urging her fans to vote as early as possible, and over the weekend, she roped in fellow famous person (and one-time movie co-star) Timothée Chalamet to talk about the importance of voting with her.

Speaking from her home, Gomez, dressed in a Joker t-shirt, got Chalamet on the phone and introduced him to her Live audience, joking, "I hate to say 'Timothée Chalamet' as a whole because that's awkward." She then asked him what he was doing. “Right now, I’m literally voting," the Oscar-nominated actor replied through his FILA-branded face mask. "I'm at my early voting station in New York, Madison Square Garden, which feels particularly metaphorical because I’ve seen many great things happen here, so I’m hoping another great thing happens today. Or not today, but on November 3rd, I hope.”

Later, Chalamet shared some tidbits about his experience. After turning his front-facing camera around to show Gomez (and the near-200,000 followers tuned into her Instagram Live) how long the line at MSG was, Chalamet said he’d been waiting for about an hour so far. The future Dune star then introduced everyone to the two men standing behind him, who he playfully referred to as his “line buddies.” As all three of them waved to the camera, they all said, "Stand against tyranny."

Gomez, who voted by mail, told Chalamet that she really wanted to vote in person but couldn’t due to “certain situations.” Nevertheless, she expressed excitement about getting "the little ballot." The pair then reflected on Trump’s efforts to “delegitimize” mail-in voting. “That’s why I wanted to go in person,” Chalamet admitted. “I just wanted to get it and see it done.”

Check out a clip from the Instagram Live below, via PopCrave.