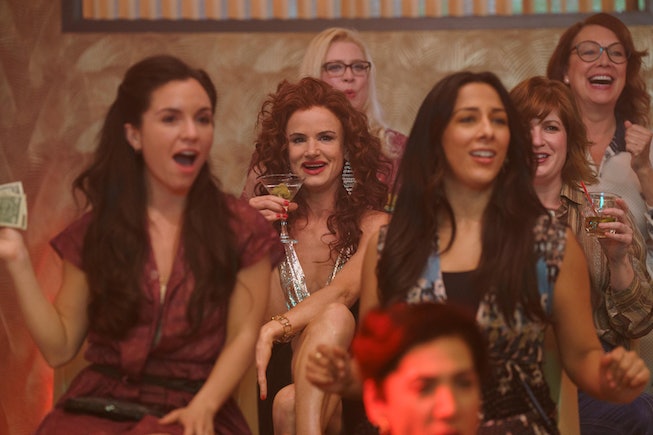 UPDATE: “A world of luxury, right at your fingertips. Sheer opulence,” says a TV announcer at the beginning of the new trailer for Hulu’s true-crime miniseries Welcome to Chippendales. As he sits and watches images of the high-life play out on the screen in front of him, Somen ’Steve’ Banerjee (Kumail Nanjiani) repeats the words he’s just heard: “Sheer. Opulence,” he says.

Released on Tuesday, Hulu’s first full trailer for the upcoming drama sets the table nicely for what to expect from this “sprawling true-crime saga” about the rise of popular male strip joint Chippendales (and all the shady dealings therein). At its start, Steve is still working for someone else, and impressing them enough to be promoted to General Manager. Alas, that’s not what he wants. “I’m afraid I cannot accept,” he counters. “That was my dream when I got here. But my goals have changed. I have changed. I’m going to start my own business: a strip club for women.”

The trailer shows us the origin of the “cuffs and collars” aesthetic, how Denise (Juliette Lewis) comes on board, and how Nick de Noia (The White Lotus’ Emmy-winning Murray Bartlett) joins the team as choreographer. Of course, it also shows how things begin to sour: In addition to copious amongst of drug and alcohol abuse, there are also more personal grievances, like when Nick de Noia’s increased public linkage to the Chippendales empire begins to sow jealousy in Steve.

With the first two episodes of Welcome to Chippendales set to premiere on Hulu on November 22, we won’t have to wait much longer to see how all those things coalesce into a story that will, eventually, involve cold-blooded murder. “This could be huge. This could be global,” says one person about Chippendales, though it could just as easily be describing the show about its creation. I’m ready for the chaos. As the trailer warns, “Living the American dream can become a nightmare.”

Check out the explosive trailer below.

ORIGINAL STORY: When we think about Chippendales, we tend to think about male strippers. And for good reason too: At its Las Vegas location and on its massive world tours, the “male revue show” is endlessly popular for the kind of person whose idea of “fun” is watching hot men slowly remove their clothing while dancing on a sexily-lit stage. (It’s me. I’m that person.) But in reality, the history of Chippendales is much darker than some washboard abs and a pair of tearaway pants would suggest. Dig deep enough into the origin story of this Vegas Strip mainstay and you’ll soon find yourself immersed in a juicy story of failed partnership, deceit, betrayal, and even murder.

Welcome to Chippendales, an upcoming miniseries, dives into this other side. Described in a press release as a “sprawling true-crime saga,” this new Hulu drama “tells the outrageous story of Somen ‘Steve’ Banerjee, an Indian immigrant who became the unlikely founder of the world’s greatest male-stripping empire — and let nothing stand in his way in the process.”

Created by Pam & Tommy’s Emmy-nominated Robert Siegel, Welcome to Chippendales (formerly titled Immigrant) stars The Big Sick Oscar nominee Kumail Nanjiani as central character Somen, who immigrates to the United States, and tries to become rich with several different business ventures before finally landing on the idea for a first-of-its-kind male stripper dance troupe that would be targeted towards women. But as suggested by the “let nothing stand in his way” bit in the plot synopsis, Banerjee was also ruthless, eventually going on to arrange the murder of his business partner Nick De Noia. (This one goes out to all the House of Gucci fans out there.)

Check out the first teaser for Welcome to Chippendales below.

Welcome to Chippendales premieres with its first two episodes on November 22.

This article was originally published on Sep. 20, 2022