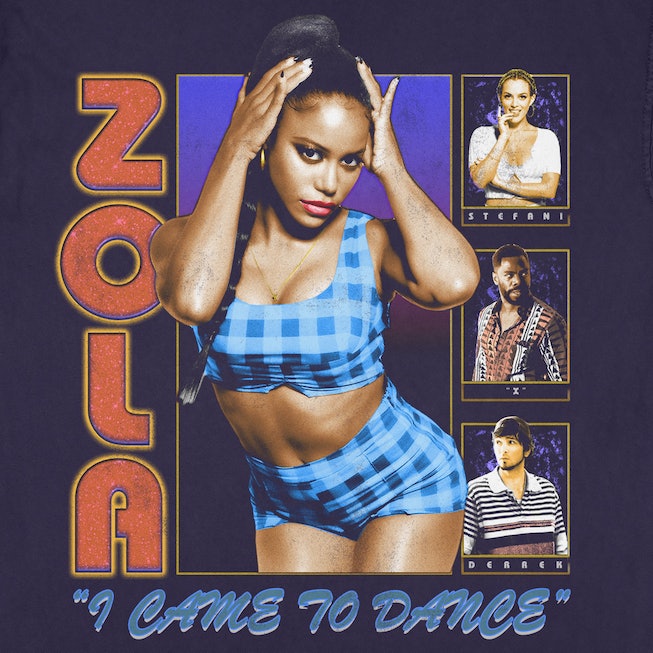 If you haven’t seen Zola yet, what are you waiting for? And if you’ve already seen Zola, here’s some good news: A24 just dropped new merch for the film.

Following up with its book release, which published the original Twitter thread by @zolarmoon’s A'Ziah “Zola” King that inspired the film in the first place, A24 teamed up with artist and art director Hassan Rahim, who also co-founded the Los Angeles streetwear label Total Luxury Spa, to design the apparel. The new launch includes two T-shirts that pay homage to airbrush and rap tees.

“My inspiration was for the graphics was Blackness,” Rahim tells NYLON. “The rap tee felt like an appropriate way to portray the energy of Zola,” explains Rahim. “I wanted her character to be viewed more like a superstar.” On the short-sleeve tee, actress Taylour Paige as Zola is front and center alongside the rest of the film’s cast.

The second release, a long-sleeve T-shirt with a subtle A24 logo on the front, features an airbrushed quote from Zola on the back saying, “Same b*tch that will smile in your face be the same b*tch that will come for your later. Period.”

A24 has been releasing merch since around 2016, and its coveted (and usually sold out) releases have provided plenty of ways for its cult community to show off their fandom around its films. Past product drops have included logo-covered Nalgene water bottles, limited-edition zines, and apparel collaborations with brands like Online Ceramics and Rhee.

“T-shirts have always been the best way to represent what you’re into as a person. Everyone loves a graphic tee,” says Rahim on how merch has expanded across categories, from music and movies to buzzy restaurants and viral content creators. “If I enjoy something and want to support it, the first thing I buy is a shirt. Plus, for A24, it’s about building more culture around the projects; it lets the film live on in different ways.”

See the latest Zola merch in more detail, below, and shop the T-shirts on A24’s website now.

NEXT UP
Culture
Aubrey Plaza Directorial Plans Involve Filling The “Female Tim Burton Spot”
Culture
An Exhaustive Breakdown Of The Balenciaga Controversy
Culture
Jeremy Allen White Has At Least Four A24 Scripts on His Desk
Culture
Mowalola Teams Up With Bratz For A Daring, High Fashion Collection