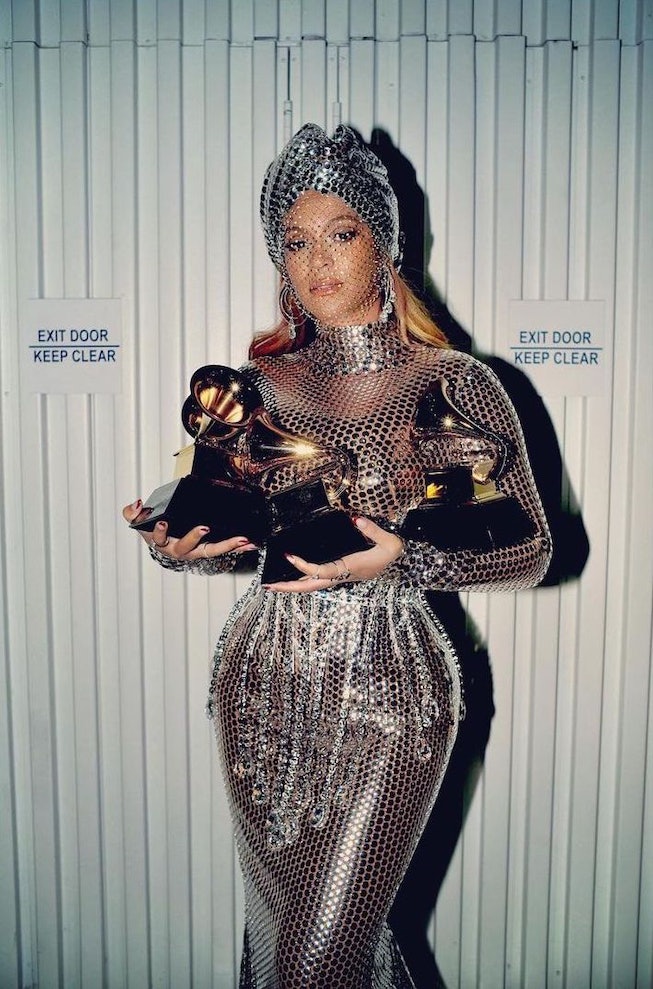 The 2021 Grammys were a spectacle both on and off the stage. The red carpet was a star-studded affair, with Billie Eilish, Taylor Swift, Megan Thee Stallion, Harry Styles, Lizzo, BTS, and more coming with their best looks. It wasn’t until a quick scan of the audience that the world learned the queen herself, Beyoncé, was also in attendance.

For the actual show, Beyoncé wore a black leather Schiaparelli couture mini dress with dramatic black-and-gold earrings. It was in this dress that she joined Megan Thee Stallion to accept the Grammy for Best Rap Song for the pair’s “Savage” remix. Plus, Beyoncé is now tied with Quincy Jones for the living person with the most Grammys. Chill night!

In true Beyoncé style, she couldn’t celebrate the evening without changing looks. To hit the after-party circuit, Bey changed into a metallic silver custom Burberry look designed by Riccardo Tisci, complete with a headpiece and sheer veil and Lorraine Schwartz jewelry.

While Beyoncé’s Grammys look may have ended the week with a bang, there were plenty of others who helped tee her up. Below, take a look at Bella Hadid’s at-home Bottega Veneta shoot, Barbie Ferreira showing off the new Simone Rocha x H&M collection, and more.

After Beyoncé made a surprise appearance to break a record at the Grammys, the singer changed into a silver Burberry look for the awards show’s after-party.

Don’t ask Saweetie how much her look cost. Based on the Fabergé jewels alone, it’s most certainly a lot.

Rowan Blanchard was able to secure the Simone Rocha x H&M collab. Meanwhile, the rest of us are still searching the resale apps.

Paloma Elsesser lounged in a room full of Lanvin to model the brand’s newest collection.