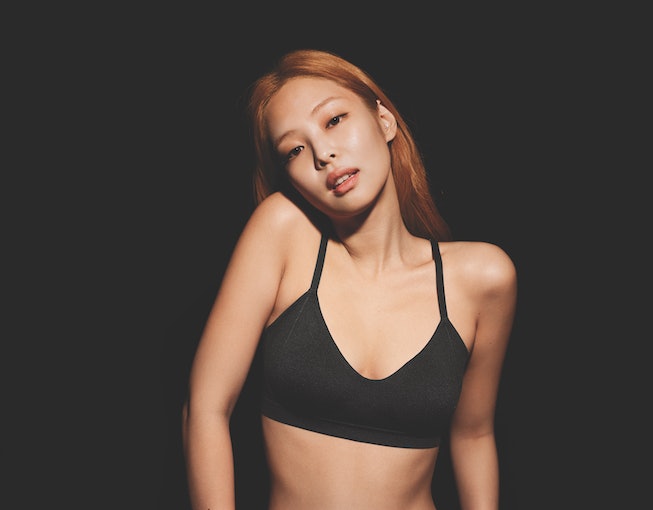 In addition to Blackpink’s highly anticipated return with their new single “Black Venom,” upcoming album, and worldwide tour, the girls are still keeping busy on the fashion front. On Friday, August 19, Calvin Klein revealed that Jennie Kim is back with another campaign for the American brand’s Fall 2022 season.

The K-pop star was photographed by Alasdair McLellan, modeling an all-black look, including Calvin Klein’s soon-to-launch “Bonded Flex” bralette and bikini, along with a pair of dark-wash baggy jeans and her on-trend orange hair. The new imagery is getting the billboard treatment, too, as fans can now see Jennie’s latest fashion gig IRL on Calvin Klein’s well-known Houston Street billboard in New York City’s SoHo and in Los Angeles on La Cienega.

Jennie has been the face of Calvin Klein since 2021, joining the brand for its collaboration with Heron Preston, followed by two seasonal campaigns alongside a celebrity-studded cast, including Dominic Fike, Solange, and more. But her influence on fashion spans beyond the American heritage brand, as she’s also a muse for Chanel, sat front row for Jacquemus, and even collaborated on her own sunglasses collection with Gentle Monster.

The brand’s full Fall 2022 campaign was revealed on Wednesday, August 31, featuring a celebrity-studded cast, including Chloë Sevigny, Michaela Jaé Rodriguez, Susan Sarandon, Dominic Fike, and Yahya Abdul-Mateen II, as well as a slew of our favorite models, like Lila Moss, Precious Lee, and more. See the rest of Calvin Klein’s Fall 2022 campaign, below.