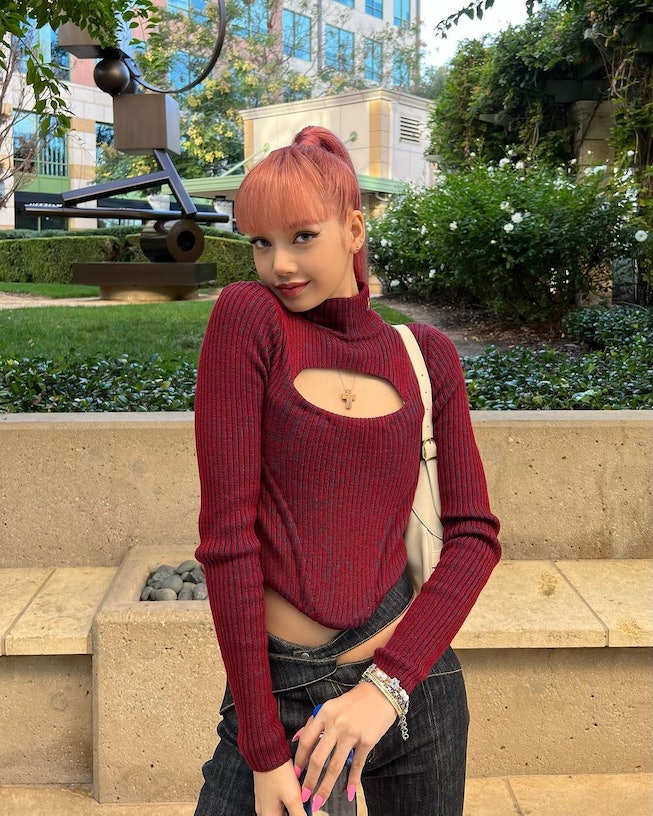 Blackpink’s Lisa has proved to not only be a multitalented musical artist but also a must-watch style inspiration, too. On Sunday, Nov. 22, the K-pop solo star took to Instagram to post her latest outfit from her interview with radio host JoJo Wright for the Los Angeles music station 102.7 KIIS FM. In the photo, Lisa wore a corseted knit top with a center cutout from Vivienne Westwood and denim pants with an asymmetrical pelvic cutout from Korean fashion label Songe Creux, priced at about $368. She also paired her outfit with bracelets from brands like Bvlgari, Veert, and Chrome Hearts, as well as a bejeweled cross necklace from Damiani, and finishing her ‘fit off with a cream-colored shoulder bag.

It seems that the “polarizing” fashion trend of pelvic cutouts is still in full swing, thanks to Lisa’s latest look, and it’s not going anywhere any time soon, even as the temperatures are dropping. The popular style is reminiscent of the wave of early-aughts trends making a comeback, and pelvic cutouts first gained popularity after it was spotted on Bella Hadid back in June 2021, while wearing a pair of “ovary pants” in Paris. Soon after, celebrities and influencers alike have all been seen wearing the cutout style, including Charli XCX, Kim Kardashian, Dua Lipa, and Rihanna. Even a high-fashion house gave its approval. During Paris Fashion Week, Chanel sent down a few looks featuring pelvic cutouts down the runway for its Spring 2022 collection.

Ahead of her appearance on 102.7 KIIS FM, the “Lalisa” singer also made visited the Zach Sang Show on Thursday, Nov. 18, where she spoke in depth about her solo debut and even some of her fashion takes. In the 35-minute interview, the singer was seen wearing a baby blue corset top printed with a cat from Vivienne Westwood over a sage green halter top from Korean brand Pain or Pleasure, and paired with feather-trimmed track pants by Dries Van Noten. In the video, she also mentioned that she had full control over what she wore for her solo debut after being uncomfortable with some clothing given to her in Blackpink. Perhaps, we’ll see Lisa — and the other members of Blackpink — styling themselves in future performances.