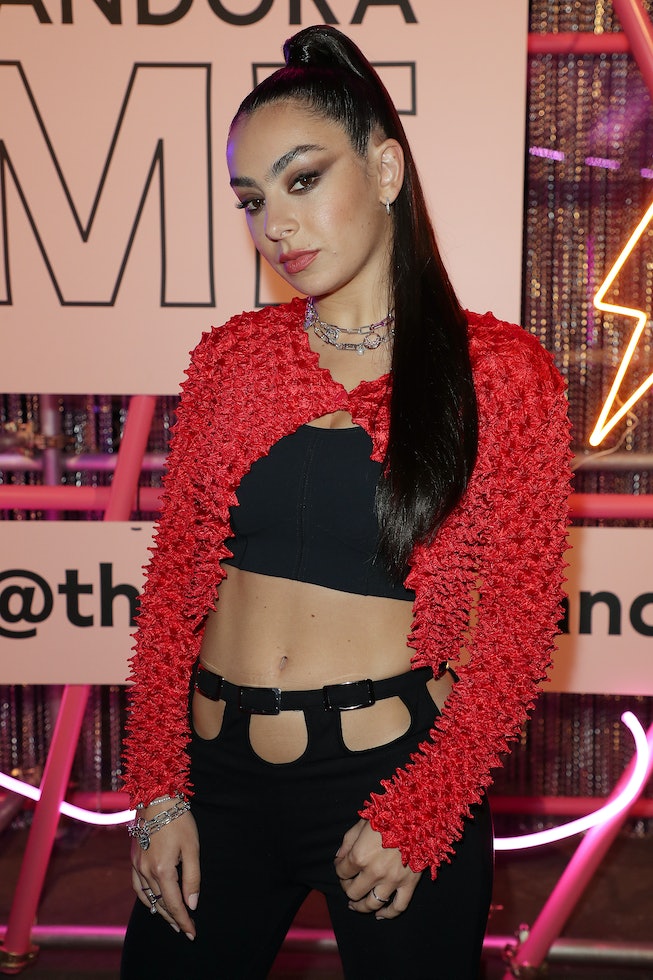 On Friday, Oct. 22, Charli XCX was seen attending the Pandora ME event in London wearing a fiery red, cardigan buttoned at the top, with a black bralette underneath. She paired her pop star ensemble with the fashion’s hottest trend at the moment, pants with pelvic cutouts, along with a pair of square-toed boots and a silver chain necklace.

The How I’m Feeling Now singer is the latest celebrity to approve of the polarizing trend, which first caught our attention in August, when Bella Hadid wore a pair of now-viral “ovary pants” in Paris. Since then, Kim Kardashian, Dua Lipa, and Rihanna have worn the look, and Chanel even gave it the high-end designer approval during its Spring 2022 runway show at Paris Fashion Week.

Another early-aughts trend that Charli XCX could be bringing back is the popcorn top (as seen with her spiky cardigan), which was also spotted on the Spring 2022 runways from Marine Serre and London designer Chet Lo.

Over the years, we’ve seen Charli XCX evolve from British punk princess to the epitome of a hyper-pop style icon, often wearing a blend of eccentric and empowering silhouettes, like her red carpet look at the 2021 MTV VMAs, where she wore a custom sultry lace mini dress from Shawna Wu.

Most recently, the singer also wrapped up a series of live performance for her album How I’m Feeling Now. In a recent Instagram post, the “Good Ones” singer wrote to fans, “The final official How I’m Feeling Now show is tonight in London. Thank you so much for all the support and love for this era. It was a magical and surreal time and I felt more connected with you all than ever before. Also thanks for selling the shows out in seconds…. Tonight’s gonna be wild 🤍.”

Ahead, check out the rest of our favorite celebrity looks, including Angelina Jolie in Versace, Zoë Kravitz’s fall layering, Yvonne Orji and Issa Rae’s matching outfits, and more.

Angelina Jolie continued serving her best red carpet looks to date at the Eternals premiere in Rome, following her recent appearance at the Eternals premiere in Los Angeles alongside her children dressed in the actress’ archival looks. Jolie, styled by Jason Bolden, wore a sleeveless metallic gown draped at the waist from Atelier Versace paired with matching platform metallic heels.

Björk goes for her signature avant-garde aesthetic in a recent performance held in her hometown in Iceland, where the singer was seen on stage in an elaborate royal blue ensemble by Balenciaga. She also wore a Medusa-inspired headpiece by James Merry and jewelry pieces by Aurum by Guðbjörg Jewellery.

Tessa Thompson attended the screening of Passing in Hollywood wearing a two-piece white gown from Giambattista Valli’s Spring 2022 collection, styled by Wayman and Micah. She then paired with black platform heels and a black choker.

Normani arrived at the launch of Lori Harvey’s SKN by LH skincare line dressed in a burgundy leather bustier top with a flared-out peplum designed by Russian designer Ulyana Sergeenko. The “Wild Side” singer paired the look with baggy denim jeans, gold heels, and an orange mini bag.

Zoë Kravitz was seen taking a solo stroll around SoHo just days before being spotted once again with her (now-official) beau Channing Tatum. This time, Kravitz wore an all-black look, featuring an oversized blazer and black tee with matching loose-fitted trousers. She tied a plaid flannel around her hip for an added pop of color and completed her outfit with a pair of flip-flops, a fitted cap, and black mini sunglasses.

Co-stars Issa Rae and Yvonne Orji attended the premiere of the final season of Insecure in Los Angeles, with Orji wearing a cutout bustier top with feather sleeves and a pink tuxedo pantsuit designed by Greta Constantine. Styled by Apuje Kalu, she finished her teal carpet look with jewelry pieces by Kallati and Annabela Chan, and heels by Casadei.

On the right, Rae bares her midriff in a burned orange halter gown from Rokh’s Spring 2022 collection paired with golden heels, styled by Jason Rembert.

Kristen Stewart is keeping the slouchy sock trend alive in a recent outing, where the Spencer star was spotted in Los Angeles wearing a button-up top over a white tank, tucked into a cuffed pair of denim jeans with a pair of Mary Janes and scrunched-up white socks. She completed her outfit with red-tinted sunglasses and a black backpack slung over her shoulders.

Supermodel Naomi Campbell made her appearance at the Get Up Stand Up! The Bob Marley Musical in London wearing a denim suit from Alexander McQueen, paired with a black belt at the waist, a leather clutch, and black pumps.

Hailey Bieber went for Old Hollywood glam at Elle’s Women In Hollywood celebration wearing a Miu Miu skirt paired with a cropped jacket, showing her midriff with a cutout detail and an oversized white collar. She completed the look with black pumps.

Dua Lipa was seen in a denim butterfly tank and matching jeans from fresh out of Blumarine’s Spring 2022 runway show, which resembled Mariah Carey’s sparkly butterfly top in 2000. She topped her look off with a Mowalola trucker hat.

Gigi Hadid was spotted in New York City opting for an all-black casual ‘fit, including a long blazer, a cropped top, and cuffed baggy jeans from Rolla’s Jeans. She completed her look with black sunglasses and Chanel quilted sandals.