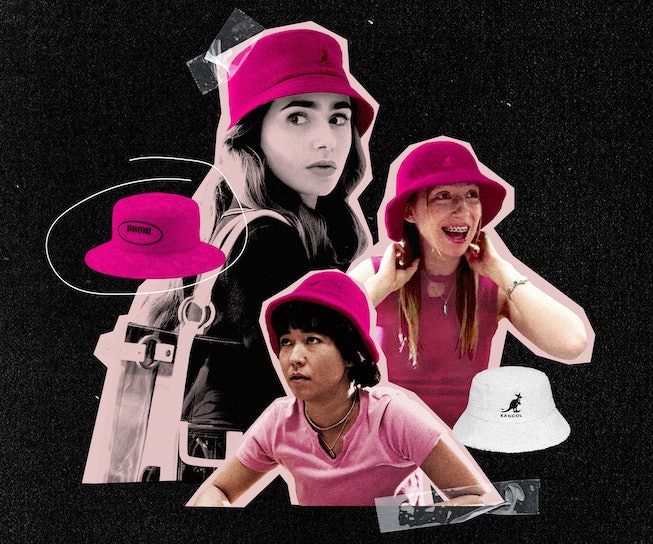 No, you're not having an early-2000s or mid-'90s — or even late-'80s — flashback moment: The bucket hat really is everywhere and on everyone right now. From Megan Thee Stallion topping off her mini-golfing 'fit, to Kylie Jenner and Anastasia Karanikolaou stunting in their matching Prada hat and teeny bag sets, to Selena Gomez-approved knitwear designer Victor Glemaud designing a wide-brimmed fundraising effort for the Biden/Harris 2020 campaign. (Reminder: Please vote!)

Plus, characters on what seems like every other show you're streaming are popping up in one, like best-dressed D.J. Flynn (Jadah Marie) in oversize leopard faux fur in Julie and the Phantoms and Emily in Paris' titular Chicagoan transplant (Lily Collins). The latter even receives the unsolicited nickname "Bucket Hat" for her collection of Kangols, costume designed and styled by Patricia Field, who's been pioneering the fashion landscape and New York club scene during all of the aforementioned headwear spikes.

"A bucket hat says [the wearer] is a little more relaxed and chill and has a nice sense of style, ease, and cool," says celebrity stylist Zadrian Smith, over the phone from London. "The silhouette is a little more loose and limber. It's not stiff, like if you were wearing a baseball cap, fedora, or a Panama hat."

He regularly styles clients in a bucket hat, including triple-threat Skai Jackson, This Is Us and When They See Us actor Asante Blackk, and, most recently, model Ashton Gohil. "It was a way to do this contemporary, yet classic suit, but make it edgy and young," says Smith.

The flexible structure, easygoing aesthetic, and vast range of colors, prints, and textures also allow the wearer to create their own individual statement. "It runs this gamut of a little bit nerdy weirdo to then some sort of cool eccentric," says costume designer Matthew Simonelli on a call, while quickly listing off klutzy hero Gilligan of '60s comedy Gilligan's Island and circa-1987 "Going Back to Cali" LL Cool J as "two ends of the spectrum." "Like no matter what, the bucket hat is reserved for people who are not blending in."

"No matter what, the bucket hat is reserved for people who are not blending in."

In HBO Max's abortion road trip movie Unpregnant, Simonelli introduces Barbie Ferreira's character, Bailey — who's all of the above — wearing a purple angora Kangol bucket hat as she pops up over a bathroom stall divider. The hat's unexpected color and plushness, which match and clash with her shaggy green stuffed animal backpack, also help convey Bailey's innate but unintentional style. "I don't know if she's registered the cool factor that she has," adds Simonelli. Plus, her face-framing headwear was actually inspired by Ferreira serving her own outfit inspo in a textured white variation on Instagram.

A nostalgic look back at the bucket hat icons of decades past really does run the gamut of individual style and creative talents. Simonelli references late-'80s hip-hop legends Run-DMC, the white cotton canvas classic of author and founder of the '70s gonzo journalism movement Hunter S. Thompson, and, of course, all the floppy and floral-accented toppers worn by Mayim Bialik in Blossom, which ran from 1990 to 1995.

"Then you think of some of the late-'80s and '90s R&B singers, like Brandy, SWV, Missy Elliot, and Janet Jackson," says Smith, who also name-checked Blossom. "That cool sense of style that's laid-back and chill." During the early-2000s return of carefree teen pop, a trifecta of Mandy Moore, Jessica Simpson, and Britney Spears in the relaxed look, also come to mind.

So is the current ubiquity of the slouchy accessory a trend cycling back once again? Or is the bucket hat a classic that just never went away? Well, kind of both.

"There's obviously the styling component, but there's also the practicality," says Smith. After all, the bucket hat originates in turn-of-20th-century Ireland as purely functional gear for fishermen and farmers. The downward-sloping brim offers outdoorsy types protection from sun and the rain. In the 1940s, the American military issued the malleable, packable headwear, which evolved during the Vietnam War into the wider-brim boonie hat to offer even more UV protection.

But the bucket hat also provides another type of safeguard. "It gives you an incognito kind of vibe," says Smith, who regularly sports his own by Valentino and Louis Vuitton.

Bucket hats are regular fashion components of choice by the frenzy-inducing members of international K-pop juggernaut BTS, especially by "sold-out king" — as in anything he wears sells out of stores — Jungkook. (J-Hope opens and closes out BTS' "Dynamite" video in a barely blush Kangol Bermuda, too.) Sure, the group's accessorizing game is always on-point, but their strategic choice of headgear — especially bucket hats — may conceal a new hairstyle and color, signaling an imminent album drop, or "comeback," as the BTS Army likes to say.

Of course, the hat's ubiquity could also be seen as a resurgence, as the '90s and early-2000s are trending hard right now. At the high-street level, H&M just released a streetwear collaboration with British singer Mabel and Kangol, featuring the requisite white faux shearling style that a pre-NCIS: Los Angeles LL Cool J would have definitely worn. Hollywood comeback label Von Dutch, probably better known for their early-aughts trucker hats, just released its own collab with Puma, featuring a pink double-branded-all-over one.

According to Von Dutch General Manager Ed Goldman, the brand can barely keep bucket hats in stock right now and, even today, the most popular styles are the Y2K originals. "It has always been the retro, all-over Von Dutch logo stamp with a solid pop-of-color background," he explains by email. The bucket hat's spacious crown and wide brim offer ample real estate, which is very conducive for the ongoing logomania trend.

"We wanted to have a brand just labeled front and center on their foreheads," laughs Walker, on a call from Los Angeles. She intentionally overshot back to the '90s for the early-2000s dramedy to show that Maura's a "try-hard," who couldn't quite capture the style. But, ironically, Walker hit right on the bucket hat trend for 2020. The purple Kangol is actually a contemporary re-release (and the same one as Ferreira's in Unpregnant).

The informal, playful bucket hat meshes also with the current leisure and sportswear movements. "Right now we're seeing this resurgence of skateboard and surfing style," says Smith, also pointing to Gen Z-oriented shows, like Euphoria, which combine early-aughts and '90s style. "That kind of young, rebellious youth culture that is coming through styling-wise for this next generation."

The liberated silhouette of a bucket hat also tracks with the proliferation of gender-neutral designs and collections. But Walker goes further with a more academic view, since fashion is almost always reflective of and reactionary to the sociopolitical turmoil of the times.

"With the Kardashian corseting and this pinnacle in our society with Trump being in office, I'm definitely hoping we release from the waist-cinching and whatnot," says Walker. "As society loosens up and becomes more liberal, so do the restrictions on a woman's body and you do see more unisex pieces."

But there's one very practical reason the bucket hat with its 2-inch (or 3, like Rihanna's custom New York Yankees one) circular border makes the most sense right now — our socially distanced 2020 and beyond.

"I just love how they become this entire perimeter that surrounds your crown," says Smith. "It just gives you a little space around your face, which makes you feel protected."