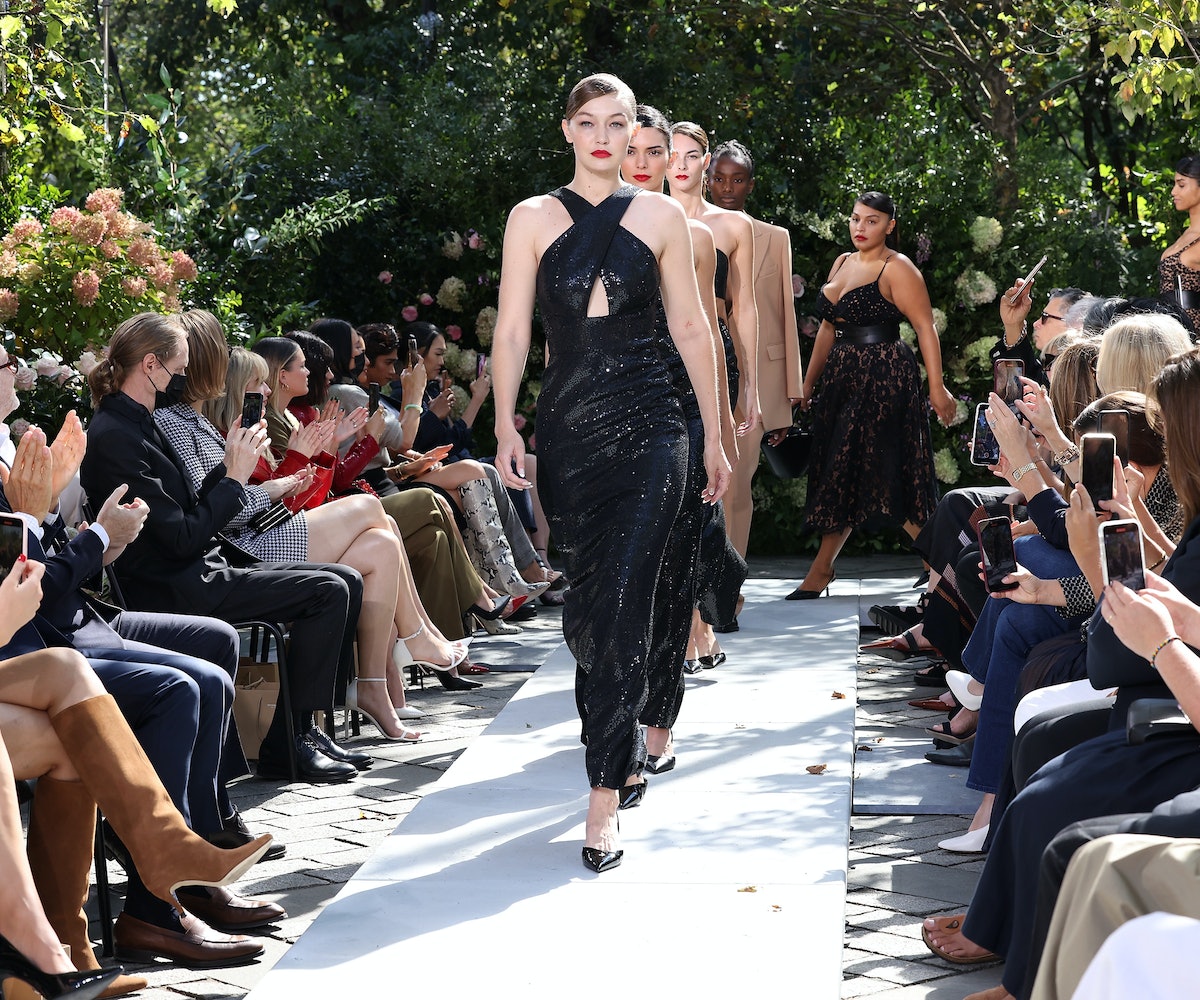 Editor’s Note: This post has been updated from its original version to include news about fashion week in New York and Paris.

Following a jam-packed fashion month with the return of in-person events in September 2021, the upcoming Fall 2022 fashion weeks are expected to carry that same momentum, despite the threat of Omicron and the rise of COVID-19 cases.

Both New York and London have announced that they are continuing to host a hybrid of live and digital presentations in February, while Gucci is expecting to return to Milan Fashion Week for the first time in two years. Meanwhile, Paris is still preparing for its upcoming Couture Week later in January. And with nearly double the amount of physical shows happening compared to last season, we can expect the same type of approach to Paris Fashion Week at the end of February.

Below, check out everything we know so far about Fall 2022 fashion weeks in New York, London, Milan, and Paris, which we’ll be updating regularly as we learn more.

What To Expect At New York Fashion Week Fall 2022

New York Fashion Week kicks off Fashion Month Fall 2022 from Friday, Feb. 11 to Wednesday, Feb. 16. On Thursday, Jan. 13, the CFDA in partnership with IMG officially released its NYFW schedule for Fall 2022, with nearly 100 designers presenting (physically or digitally) and more to be revealed.

So far, we can expect a slew of marquee names in New York, including Anna Sui, Christian Siriano, Jason Wu, Altuzarra, LaQuan Smith, and Michael Kors. Eckhaus Latta is also set to hold its anniversary collection, and there will also be shows from Coach, Tory Burch, and more. According to Business of Fashion, Carolina Herrera is prepping on-site testing, along with proof of vaccination from attendees, at its upcoming runway show, while notable names like Marc Jacobs, Oscar de la Renta, Rodarte, Staud, Chromat, and Pyer Moss are still missing from the schedule.

Thom Browne, who made an exciting return back to New York last season, will actually debut its Fall 2022 collection on April 29, according to Vogue. The runway show will take place just a few days before the Met Gala on May 2, which will celebrate the opening of the second part of The Met’s Costume Institute exhibition, titled In America: An Anthology of Fashion.

After making a highly anticipated NYFW debut last season, Peter Do plans to showcase his namesake’s Fall 2022 collection, while Theophilio has opted for a digital presentation. Sandy Liang, PH5, Tanya Taylor, and more have opted for digital releases of their new collections, as well. Area, Helmut Lang, Jonathan Simkhai, Simon Miller, and Connor McKnight are among the few brands that will be holding presentations by appointment only. The official American Collections Calendar also welcomes a few newcomers, including Saint Sintra, Dauphinette, PatBo, and more.

On Wednesday, Feb. 2, IMG revealed a series of events and programs happening for “NYFW: The Shows,” taking place from Friday, Feb. 11 to Wednesday, Feb. 16 at Spring Studios and virtually at NYFW.com.

Events include “The Art of Rodarte,” which will be an immersive experience that features a close and in-person look at work by Rodarte’s Kate and Laura Mulleavy, with an industry preview and reception to be held on Friday, Feb. 11. The exhibition will be open to the public throughout the week from Saturday, Feb. 12 to Tuesday, Feb. 15, and free tickets can be accessed at Spring Studios or reserved online starting Monday, Feb. 7.

On Sunday, Feb. 13, In The Blk is partnering with Color of Change, Endeavor Impact, and UPS to present the collections from House of Aama, Khiry, and Third Crown in a group runway show for the one-year anniversary of #ChangeFashion. The showcase will support career pathways for Black artists in the fashion industry as part of a partnership between Color of Change, IMG, and model Joan Smalls.

In terms of “NYFW: The Talks,” there will also be a series of conversations throughout the week, like a chat with the designers at Rodarte about sustainability and the resale economy titled “Second Life Style.” Other talks include “New Standards of Beauty, Black Representation Beyond the Runway,” with speakers like Brother Vellies and Fifteen Percent Pledge founder Aurora James; “10 Years of Eckhaus Latta,” which will be a conversation with designers Mike Eckhaus and Zoe Latta; “Scandal, Shock and Awe: Fashion Journalism,” and “The Future of Fashion Commerce,” which will discuss the rise of NFTs and how fashion is shifting into the metaverse.

Cult activewear brand Alo Yoga will also host its “Alo Yoga Sanctuary” at Spring Studios, including activities such as guided meditations, reiki, B12 shots, massages, and wellness lattes, with their latest collection on display, as well.

With the global spread of the Omicron variant, the CFDA has announced COVID-19 safety guidelines for all attendees, which requires all guests and individuals entering any space to provide proof of vaccinations, wear masks indoors at all times (with an exception for eating and drinking areas or for models walking the runway). There will also be reduced guest capacity with appropriate spacing at the show’s venues, which are most likely to all take place indoors this winter.

But already, the recent surge of COVID cases has affected designers’ work schedules. On Monday, Jan. 24, Tom Ford released a statement that its runway show, which was expected to close New York Fashion Week on Wednesday, Feb. 16, will not go on. “Due to COVID outbreaks over the past few weeks in the atelier and the design studio in Los Angeles as well as recent shutdowns of our factories in Italy, the TOM FORD collection will not be ready to show in New York on February 16, as originally planned,” quoted Vanessa Friedman of The New York Times. (NYLON reached out to a spokesperson for Tom Ford for comment.)

You can view the full NYFW Fall 2022 schedule here, with more updates to come.

What To Expect At London Fashion Week Fall 2022

Similar to New York, the British Fashion Council announced that shows will adopt a hybrid schedule, holding a combination of physical and digital shows for both men’s and womenswear collections after canceling the January 2022 menswear showcase due to the rise of COVID-19 cases, according to WWD. London Fashion Week is set to take place between Friday, Feb. 18, through Tuesday, Feb. 22.

The official LFW Fall 2022 schedule for February holds a number of household names, including Richard Quinn, Erdem, Simone Rocha, David Koma, Roksanda, and COS, as well as buzzy designers such as Nensi Dojaka and Knwls. A good amount of emerging labels are scheduled to host physical shows during the four-day affair, such as Asai, Feng Chen Wang, Bethany Williams, Stefan Cooke, and Yuhan Wang. Meanwhile, Burberry has yet to confirm whether it will be unveiling its collection during London Fashion Week.

What To Expect At Milan Fashion Week 2022

Milan Fashion Week is also coming back in full swing from Tuesday, Feb. 22, through Monday, Feb. 28. Although there is not much news surrounding Milan so far, Gucci will return for the first time in two years on the Milan Fashion Week calendar, according to a report from BoF made back in November, as the Italian fashion house had previously shown its collection on its own schedule through fashion films, virtual shows, and destination events. Most recently, Gucci unveiled its latest collection in Los Angeles with a star-studded audience and runway show. Plus, newly appointed Bottega Veneta creative director Matthieu Blazy is set to unveil his very first collection on Saturday, Feb. 26, following Daniel Lee’s sudden exit from the brand.

What To Expect At Paris Fashion Week Fall 2022

Paris Fashion Week will host its Fall 2022 shows between Monday, Feb. 28, through Tuesday, March 8. According to BoF, Vaquera, which usually shows in New York will present its latest collection in Paris, as well as The Row, after a previous runway show in the French fashion capital back in 2015. Vtmnts — Vetements’ sub-label that launched in 2021 — will also have a physical show for the first time.

WWD reports that Off-White will kick off Paris Fashion Week’s 37 in-person presentations and 13 digital-only shows. This marks the first proper show since designer and founder Virgil Abloh’s passing in November 2021. Upon his death, the Milan-based luxury brand held memorials at its retail locations across the globe. Traditionally, Louis Vuitton wraps up the week with its new collection, but the French fashion house has switched calendar spots to Monday, March 7.

Plus, a rising name from Copenhagen has joined the official schedule in Paris. On Wednesday, March 2, Cecilie Bahnsen will present her runway show at the Palais De Tokyo. The designer has regularly shown at Copenhagen Fashion Week, which just wrapped its own Fall 2022 season, as well as hosted presentations and digital shows in the French capital.

“I’m unbelievably honored and full of joy to be doing a ‘proper’ show in Paris,” said Bahnsen in an official statement on Monday, Feb. 7. “This is our fourth collection at Paris Fashion Week, but in these pandemic times, it’s the first we will be able to present physically IRL on the runway. To be in the Palais de Tokyo, this is what I longed for when I worked in Paris in my early 20s — an intern from Copenhagen watching the collections from the distant backrow.”

We’ll continue to update this post as more announcements are made.

This article was originally published on Jan. 13, 2022