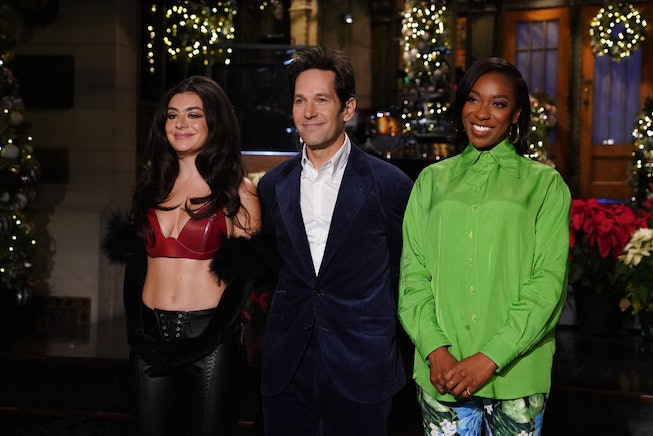 For the first time in Saturday Night Live history, the cast was sent home hours before the episode was set to air. On Saturday, Dec. 18, the show posted a statement on Twitter, writing, “Due to the recent spike in the Omicron variant and out of an abundance of caution, there will be no live audience for tonight’s taping of Saturday Night Live and the show will have limited cast and crew.

Soon after, Charli XCX also wrote that she would no longer be able to perform due to precautions. The How I’m Feeling Now singer, who was slated to be the musical guest, posted an apology to fans for the sudden cancellation on Instagram, stating: “Hi everyone, due to the limited crew at tonight’s taping of SNL, my musical performances will no longer be able to go ahead. She continued, “I am devastated and heartbroken. Myself, Caroline, Christine, and all our crews and teams have worked so hard all week alongside the SNL team to bring the most amazing musical performance to life.”

But the show continued, hosted by Paul Rudd along with guest stars for the “five timer’s club” episode including Tom Hanks, Tina Fey, Kenan Thompson, and Michael Che. Charli XCX still stunned in the ultimate Y2K ‘fit from the preview, despite the canceled live performance, and the pop star posted her SNL look wearing a red leather bralette from Anoeses with black lace-up pants from I.AM.GIA and long velvet evening gloves adorned with feathers. She also included photos and videos from behind the scenes of what could have been, but hopefully, we’ll get to see the highly anticipated performance very soon.

Ahead, check out the rest of our favorite celebrity looks, including Lily Collins in Valentino, Blackpink’s Jisoo in Dior, Taylor Swift’s 32nd birthday dress, and more.

Actress Carrie-Anne Moss attended The Matrix Resurrections screening in San Francisco in a custom Oscar de la Renta dress, with a reference to the digital rain in the matrix with green and silver sequins.

For the second season premiere of Emily in Paris, NYLON cover girl Lily Collins wore a Valentino haute couture mini dress in a groovy print and embroidered sequins. She completed her outfit with mesh tights and black platform heels.

Rita Ora attended the premiere of Being The Ricardos in Sydney, Australia opting for a little black dress from Miu Miu, lined with rhinestones at the neckline. She completed her look with pointed-toe black pumps also adorned with crystal embellishments and black sunglasses.

Taylor Swift nearly broke the internet for her birthday. She was seen along with Alana Haim — with Haim in a fitted metallic mini dress from Sandy Liang, and Swift in a golden one-shoulder ensemble by London designer Julia Clancey. The singer completed her birthday look with a bold red lip, black nail polish, and a wavy hairstyle.

Zendaya made another reference to the Spider-Man series. On Monday, Dec. 13, she wore a beige dress that was embellished in sparkly webbed detailing and adorned with a plunging neckline, a high slit, and an open back. She also wore dazzling diamond earrings and rings from Bvlgari along with sparkly black pumps by Christian Louboutin and a mask, not seen here, designed by Valentino’s Creative Director Pierpaolo Piccioli.

Madison Beer made an appearance at the Spider-Man: No Way Home premiere in Los Angeles wearing a fuchsia dress from London designer Nensi Dojaka.

While out in London visiting the Royal Opera House, Hailey Bieber wore a black cotton mini dress in black from Acne Studios with black tights and heels.