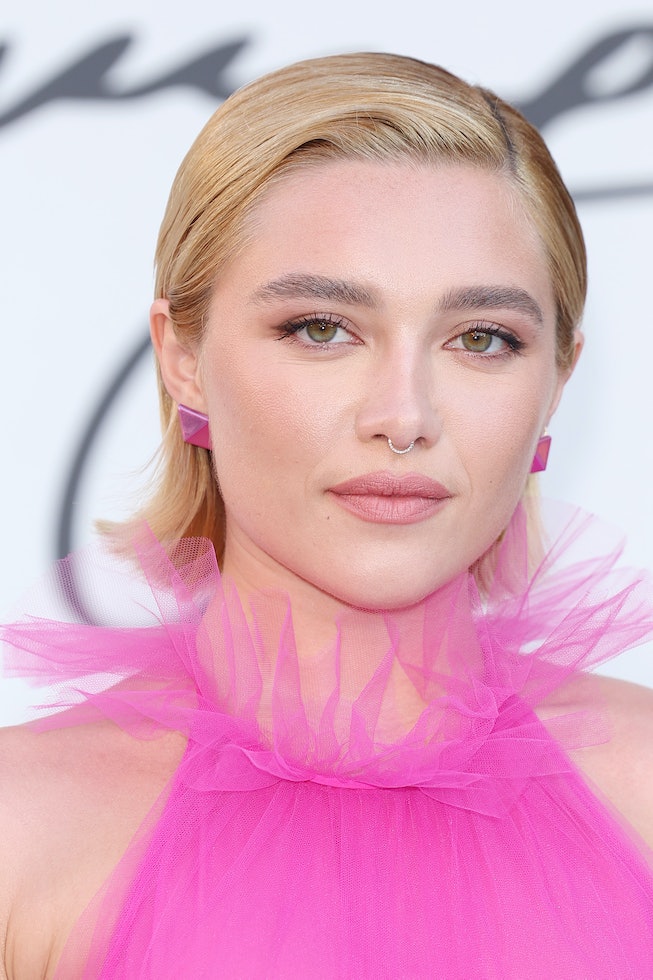 Paris Couture Week may be over but there were some buzzworthy moments and a ton of celebrity fashion that are just too good to not talk about, including Valentino’s Fall 2022 couture show.

In the final days of fashion week on Friday, July 8, Valentino held its presentation in Rome and as expected from the glitz and glam of haute couture, we were treated with a slew of celebrity appearances featuring none other than actress Florence Pugh.

While making her way down the Italian city’s famous Spanish Steps, the Black Widow star channeled the barbiecore trend by donning an elaborate sheer gown from the luxury brand’s coveted Fall 2022 “Pink PP” collection. Pugh then finished off her tulle ensemble with a pair of platform Garavani shoes and geometric-shaped earrings, all in pink, of course.

But her front-row outfit came with quite a bit of criticism, as the dress was see-through and bared her chest. On the following Sunday, Pugh responded to the backlash she received about her Valentino dress on Instagram, writing in the caption, “Listen, I knew when I wore that incredible Valentino dress that there was no way there wouldn’t be a commentary on it. Whether it be negative or positive, we all knew what we were doing. It isn’t the first time and certainly won’t be the last time a woman will hear what’s wrong with her body by a crowd of strangers, what’s worrying is just how vulgar some of you men can be.”

She then addressed the comments about her “flat chest,” stating, “Thankfully, I’ve come to terms with the intricacies of my body that make me, me. I’m happy with all of the ‘flaws’ that I couldn’t bear to look at when I was 14. So many of you wanted to aggressively let me know how disappointed you were by my ‘tiny tits’, or how I should be embarrassed by being so ‘flat chested’[...] What’s more concerning is…. Why are you so scared of breasts? Small? Large? Left? Right? Only one? Maybe none? What. Is. So. Terrifying. It makes me wonder what happened to you to be so content on being so loudly upset by the size of my boobs and body..?”

She then continued: “Grow up. Respect people. Respect bodies. Respect all women. Respect humans. Life will get a whole lot easier, I promise. And all because of two cute little nipples…. #f*ckingfreethenipple.” And we couldn’t agree more.

Last week, actress and style star Zendaya made her way to the set of The Crowded Room in New York City to visit her beau Tom Holland. She perfected the all-black uniform, opting for a midriff-baring crop top with high-waisted cargo pants and loafers.

This past Friday, actress and singer Selena Gomez was seen in Paris wearing a matching plaid top and mini skirt set from Alaïa during her European press tour of Rare Beauty. She dressed her look with white pumps and the brand’s Le Coeur bag from its Spring 2022 collection.

Megan Thee Stallion rocked the going-out catsuit trend while heading to the Wireless Festival after-party in London on Friday, July 8. The H-town hottie was captured in a black halter look with suede stiletto sandals from Giuseppe Zanotti and a decorated leather mini bag in hand.

Anne Hathaway made an appearance at the Valentino couture showcase in Rome wearing a glittery pink mini dress from the brand’s Fall 2022 “Pink PP” collection with platform Garavani shoes and a micro-mini purse.

Supermodel Naomi Campbell arrived at the Valentino couture showcase in Rome wearing a matching strapless white top and trouser set paired with a ruffled black coat from the house’s Spring 2022 “Anatomy of Couture” collection. She also opted for the Valentino Garavani heels with black sunglasses.

Mother-daughter duo North West and Kim Kardashian were spotted at the Jean Paul Gaultier Fall 2022 couture show presented by Olivier Rousteing. Kim wore a pinstripe dress with a neutral-toned bust while North was seen next to her in a pleated pinstripe vest-and-skirt set with a white top, black tie, and platform boots. The pair also coordinated with mini sunglasses and a chained nose ring.

Back on Wednesday, July 6, Stranger Things actress Sadie Sink was seen outside of the Today show wearing a floral Miu Miu dress, and white slingback pumps, styled by Molly Dickson.

Actress Tessa Thompson was seen at the premiere of Thor: Love and Thunder in London donning a strapless golden dress from Oscar de la Renta. Stylists Wayman and Micah then paired her look with thigh-high boots from Stuart Weitzman and a matching choker.

NEXT UP
Culture
Caroline Polachek In KNWLS & More Party Photos You Missed
Fashion
Jenna Ortega Is The Face Of Adidas’ Newest Line
Fashion
The Wildest Front-Row Looks From Couture Week In Paris
Fashion
Collina Strada & Vans Team Up For A Chiller-Friendly Collection
Style + Culture, delivered straight to your inbox.