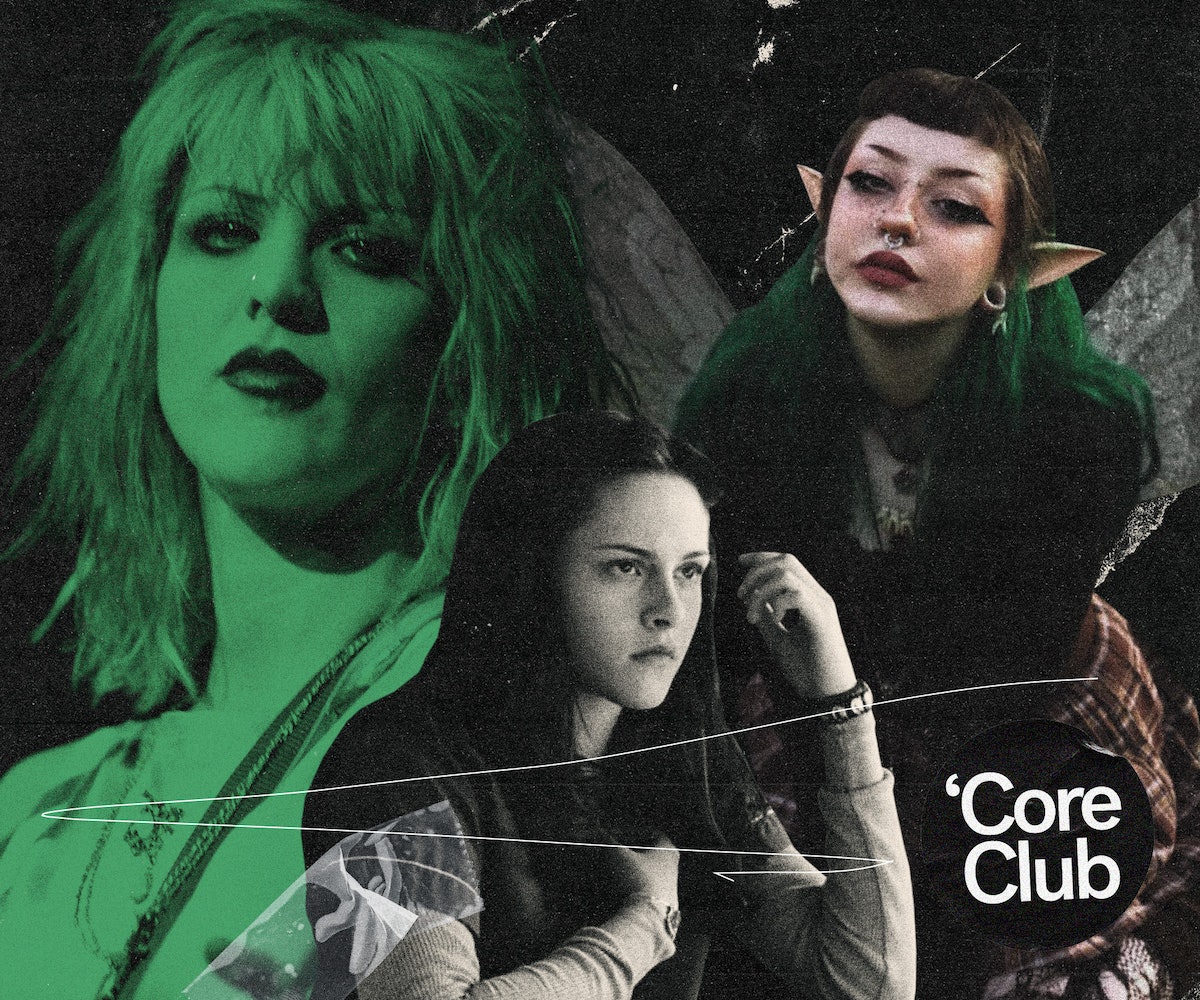 Whether it's a fashion trend on TikTok or a certain style taking over Instagram, internet aesthetics are always changing. Our series 'Core Club breaks down the looks that you're starting to see a lot on social media and highlights the people and brands channeling it best. Next up: grunge fairycore.

What do you get if you mix Courtney Love, fairies, and the Twilight Saga?

Though it sounds like the windup to a punchline, the three aesthetics have seamlessly melded together to create a new subculture: grunge fairycore. While the hodgepodge of the different styles and fandoms that comprise grunge fairycore may seem random, it’s really anything but. The look sits at the intersection of two popular aesthetics — grunge and fairycore (hence the name) — thus making it the perfect center of the Venn diagram for those who wish to straddle fantasy and reality.

Like its more ethereal sibling fairycore, the beating heart of grunge fairycore is nature, particularly the forest. It leans into motifs like moss, mushrooms, stones — a gothic foil to fairycore’s penchant for flowers and deer. Color palette is also paramount to the look, as earth tones and muted hues take the place of fairycore’s whites and pastels. One of the most crucial aspects of grunge fairycore is the commitment to layering. Be it ripped tights, leg warmers, fingerless gloves, cardigans, or petticoats, more is more when it comes to grunge fairycore. As the days are starting to get shorter and colder, fairycore’s evolving subculture seems perfect for fall.

While the term “grunge fairycore” may be unfamiliar to some, the aesthetic has already found a comfortable home online. It’s likely that the look reaches far beyond the confines of a hashtag, as many proprietors may lack the proper vocabulary to define the burgeoning style. Unlike more baseline subcultures, like cottagecore or goblincore, there is room for several variations of grunge fairycore in the lexicon. Leading the pack is #fairygrunge with 120.5 million views on TikTok and 73,800 posts on Instagram. Meanwhile, #grungefairycore is raking in more than 21.5 million views on TikTok and 29,300 posts on Instagram, and #fairygrungecore racks up another 7.9 million views on TikTok. With all the name variations, the aesthetic seems to only be spreading like a patch of woodland mushrooms.

Bug Acquarola, known as @faeriietooth on Instagram, sees the subculture as the best of both worlds. “The two styles and subcultures I was involved in the most as a teenager were hippie and goth,” the 19-year-old says of their personal style. “So to me fairy grunge is a mix of them both. I get the airy skirts and flowy sleeves of hippie outfits along with the darker colors and more alternative accessories of the gothic subculture. I also get to incorporate some of my biggest interests, like insects, bones, and fungi, which makes it feel so much more me!”

Melissa Chen, a data comms analyst at Pinterest, reports a massive spike in aesthetics related to grunge fairycore, with alt outfits being pinned at 202 times and fairycore at 71 times the rate they were last year. “Since pre-pandemic times, there has been a large rise in ‘core aesthetic’ driven by Gen Z,” says Chen. “While in quarantine, Gen Z has been searching for aesthetics to match the lifestyle they identify with most, and then shopping for clothes and home decor to live out their new identities.”

Kodi and Laila Garsys, owners of the Depop shop @hollowshores, believe that larger cultural trends also play a big role in the rise of grunge fairycore. “There’s a touch of fantasy and also a touch of mischief that helps you feel just a little bit lighter with all that’s going on around us,” they explain. “Also, with so many people getting into crystals and gardening and herbs and baking and even more with sustainability and thrift culture, it makes sense that so many of us want to connect with that magic playful side of ourselves.”

Rumblings about grunge fairycore began at the end of December 2020, and its online presence slowly accumulated more and more during the first half of 2021, before having its first major peak in July. The summertime boom coincided with the leadup to the release of all five films in the Twilight Saga on Netflix. The link between the smash hit vampire love story and the newfound subculture may not be immediately clear, but the Twilight series’ heroine, Bella Swan, is one of the key inspirations for grunge fairycore. While Bella may not necessarily possess the same whimsy as the “fairy” aspect of grunge fairycore, she certainly brings the grunge. Twilight, which was first published in 2005, came just over a decade after the peak of the grunge era — which many agree died with Kurt Cobain in 1994. While she was never hailed for her personal style, Bella’s love of earth tones and commitment to layering certainly call back to grunge fashion and are quintessential to the basis of grunge fairycore.

While Bella may represent a more toned-down look, some proponents of the aesthetic lean further towards another grunge inspo: Courtney Love. The Hole frontwoman’s love of tattered tights, sexy slip dresses, and girlish lace collars bridges the Kinderwhore trend that Love popularized during the ’90s with the grunge fairycore look of today, meshing the sexy, the ironic, and the fantastical.

The trend didn’t fizzle out after the Twilight films ceremoniously dropped on Netflix — in fact, the traction only continues to build. According to Chen, Pinterest searches for “grunge fairycore” started to rise dramatically in January 2021. The aesthetic also saw its biggest surge in August, which is supported by Chen’s report that “grunge fairycore” searches on Pinterest during the month of August were double the searches in January.

The most enduring aspects of the trend are its accessibility and low commitment threshold. Anyone wishing to convert their wardrobe is encouraged to hit their local thrift stores. Those who wear a muted hoodie over a pair of ripped fishnets are just as valid as those who like to add fairy wings and elf ears. As opposed to many subcultures that rely on the churning out of microtrends, grunge fairycore welcomes creativity and DIY approaches to dressing to theme. As the Garsyses of Hollow Shores put it: “Who doesn’t want to feel like a fairy?”