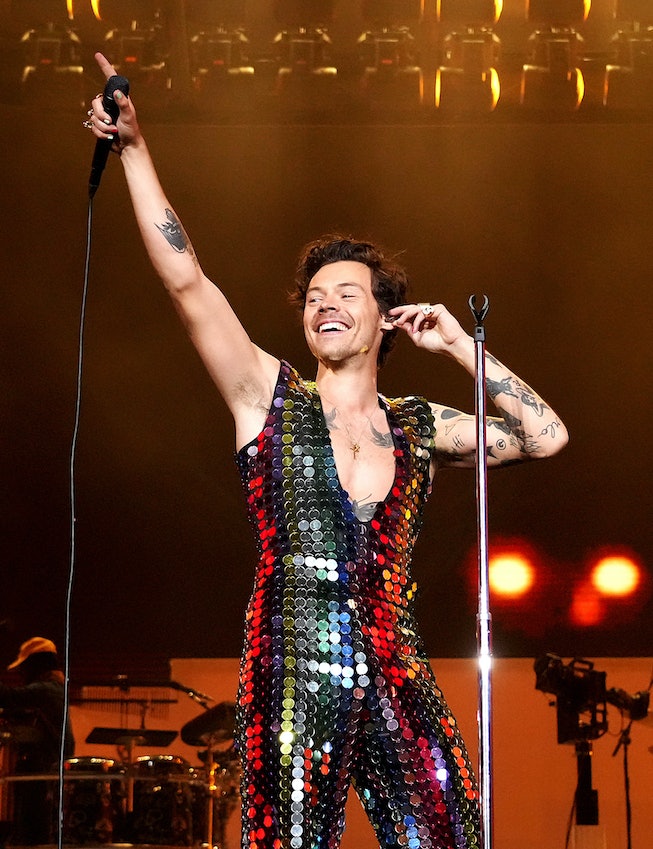 A newly released album, a world tour (and another one on the way), and his first-ever Coachella headliner performance couldn’t keep Harry Styles from taking on yet another major gig. On Monday, June 20, Gucci announced that the longtime fashion muse has designed a new collection, titled HA HA HA, with creative director Alessandro Michele, which will arrive in stores in October.

It’s a long time coming for Styles, who’s been a friend of the Italian fashion house since the singer wore one of Michele’s first designs as creative director for an X Factor performance back in 2015. Fast-forward three years later, Styles has been an official face of the brand since 2018, starring in campaigns, fashion films, and wearing his own custom looks for red carpet appearances and live performances over the years. Though the two have teamed up before on a limited-edition line of merch for Styles’ Fine Line album, this collection takes the pop star’s Gucci status to a whole new level.

“Harry has an incredible sense of fashion. Observing his ability to combine items of clothing in a way that is out of the ordinary compared to the required standards of taste and common sense and the homogenization of appearance, I came to understand that the styling of a look is a generator of differences and of powers, as are his reactions to the designs I have created for him, which he has always made his own,” said Michele in an official statement. “These reactions restore me with a rush of freedom every time.”

Ahead, find out how you can get your hands on Harry Styles’ Gucci HA HA HA collection.

The HA HA HA collection is a culmination of what Styles has worn from Gucci over the years, including English tailored suits, polished outerwear, accessories, and more. Alongside the more traditional menswear looks are, of course, a few items that nod to Styles’ penchant for unexpected outfits, like colorful sweater vests, bowling shirts, printed pajama sets, and pleated kilts with leather straps.

“The idea of working together came to me one day while we were talking on the phone: I proposed creating a ‘dream wardrobe’ with him, starting from those small oddities that come together in childlike visions,” continued Michele. “We ended up with a mix of aesthetics from 1970s pop and bohemian to the revision of the image of the gentleman in an over-turned memory of men’s tailoring.”

When and where can I buy Alessandro Michele and Harry Styles’ Gucci HA HA HA collection?

The collection is set to drop in October and will likely be available to purchase on Gucci’s website and select Gucci stores worldwide. Though, we’re hoping that there will be some specially designed pop-up stores across the globe for the collection’s official launch, as well.

See more of the Gucci HA HA HA collection, below.