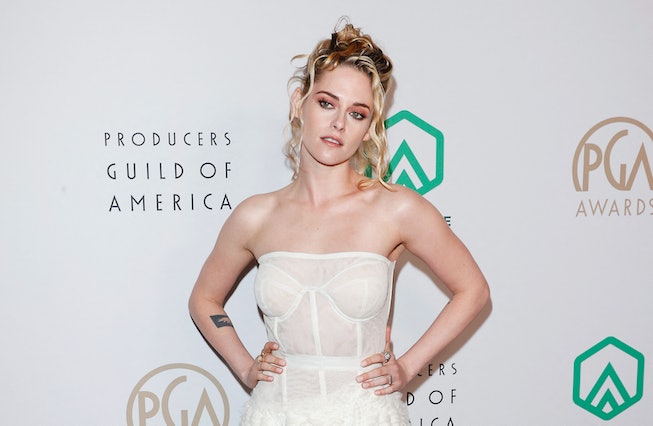 The 33rd Annual Producers Guild Awards took place in Los Angeles over the weekend, honoring the best of television and recognizing some of the biggest names in Hollywood. Just like every red carpet event, there’s bound to be some jaw-dropping looks and we were treated to yet another fashion statement from none other than Kristen Stewart.

On Saturday, March 19, the 31-year-old actress looked absolutely gorgeous in perhaps her best look so far this year, dressing up in a cream-colored corset gown from Brandon Maxwell’s Fall 2022 collection, which came with a full cable jacquard skirt. She then completed her ensemble with a loosely-curled updo, light rosy makeup, and diamonds from Chanel and Cast. Her bridal-inspired look comes just months after her engagement with her fiancée Dylan Meyer last year in November.

But this isn’t the first time we’ve seen the Spencer star rocking a corset. Back in October 2021, the actress was spotted in a black lace corset during Chanel’s Spring 2022 runway show in Paris, which she styled with a pink and white checkered tweed set, slouchy white socks, and black loafers. As early-aughts fashion trends are back bigger and better than ever, maybe we’ll continue to see Stewart in many more corsets to come and even the polarizing micro-mini skirt resurgence?

Ahead, check out the rest of our favorite celebrity looks from the past week, including Dakota Johnson in Gucci, Blackpink’s Jennie channeling balletcore, and more.

While out to celebrate Skims’ new swimwear pop-up store in Miami over the weekend, tennis champ Naomi Osaka was captured wearing a shimmery turtleneck dress, which she styled with a cropped leather jacket and studded sandals.

Kerry Washington attended the Producers Guild Awards in Los Angeles wearing a stunning corseted gown from Sergio Hudson, which she paired with a diamond necklace and body chain.

Zazie Beetz attended the premiere of Atlanta during the 2022 SXSW Conference and Festivals in Austin rocking a vintage Jean Paul Gaultier look, which she wore with yellow platform heels. The Atlanta star also wore jewelry by Eéra, Delfina Delettrez, and BonBonWhims, and carried a multicolored mini bag in hand.

Dakota Johnson was seen at the premiere of Cha Cha Real Smooth at the 2022 SXSW Conference and Festivals wearing a suited look from Gucci’s Love Parade collection, which she also wore with a “GG” embroidered tulle bodysuit and black boots.

Last week, actress Brittany Snow attended the premiere of A24’s series X in Hollywood wearing an off-the-shoulder dress by designer Cong Tri, which is adorned with a slit at the leg, and paired with black sandals.

During her performance at the 2022 SXSW Conference and Festivals in Austin last week, Japanese Breakfast’s Michelle Zauner was seen on stage wearing a black heart cutout blazer from Area, which she styled with a dazzling bralette, a black mini skirt, and a chunky pair of platform lace-up boots.

Bella Hadid never fails to impress when it comes to her street style. Last week, the supermodel was captured out-and-about in New York City wearing a pink asymmetrical top, which she thrifted from Depop, along with a pair of jeans from Denim Tears x Levis jeans and brown boots. She also wore mini sunglasses and a Bvlgari necklace, and carried a brown Burberry shoulder bag

While attending the Bodies Bodies Bodies premiere during the 2022 SXSW Conference and Festivals in Austin, actress Rachel Sennott was spotted in an apricot orange set, donning a matching bralette and micro-mini skirt paired with a cropped jacket. She also wore square-toed sandals and carried a white purse.

Actress Chase Sui Wonders was also captured at the premiere of Bodies Bodies Bodies in Austin wearing a black Chanel cropped jumpsuit, adorned with the “CC” logo, and black pumps.

While attending the Stylist Remarkable Women Awards 2022 in London, Irish actress Nicola Coughlan was seen wearing on the red carpet wearing a regencycore-inspired mint green tulle gown by Simone Rocha, which she also wore with pointed white heels, a pearl-embellished handbag and and diamond earrings.

NEXT UP
Fashion
Taylor Russell's Style Evolution, From Indie Films To Fashion’s ‘It’ Girl
Fashion
Rita Ora’s Gills-Inspired Beauty Stole The Show At The British Fashion Awards
Culture
An Exhaustive Breakdown Of The Balenciaga Controversy
Fashion
The Most Memorable Fashion Moments At The 2022 People’s Choice Awards