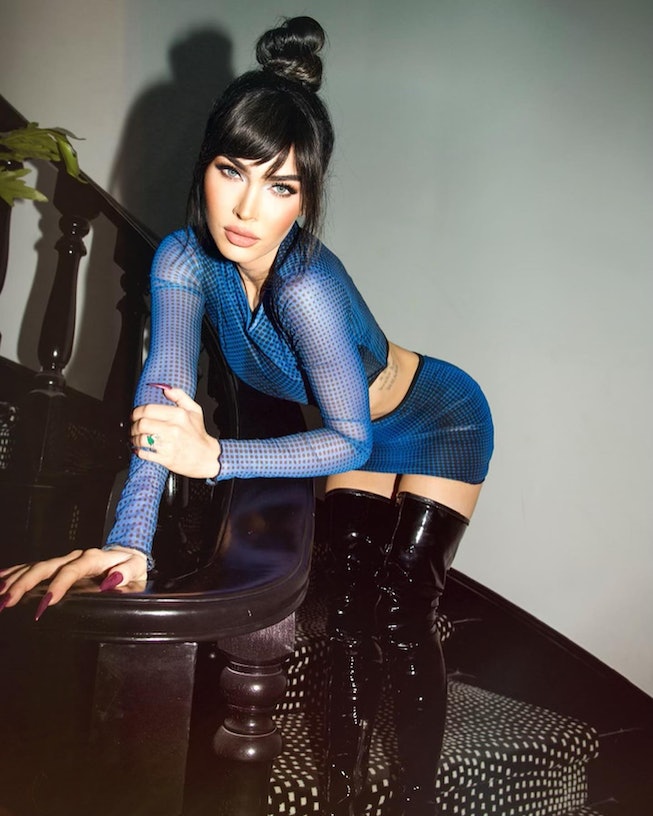 It appears that Megan Fox is a fan of itty-bitty silhouettes lately as she’s been seen going out in a number of cropped cardigans and micro-mini skirts over the past few months alone. This last week was no different for the actress, who was most recently spotted once again in this season’s biggest Y2K fashion trend.

This isn’t the first time, nor does it seem like the last, we’ve seen Fox wearing pieces by the online “It” brand. Shortly after her engagement with MGK back in January, the pop-punk duo went on a trip to Lake Como, and Fox bared her midriff in Edikted’s micro-mini cardigan top, which she styled with a vibrant leopard printed coat and a matching ‘90s-inspired fuzzy bucket hat from Stand Studio, along with wide-leg pants by GCDS and white sneakers. Other celebrity fans of label include Kirsten Stewart, who wore a cropped button-up sweater while promoting Spencer, Olivia Rodrigo, and Addison Rae, among others.

In the Instagram post made by the Jennifer’s Body star, Fox wrote a caption that may or may not also be an unofficial pregnancy announcement, according to fan speculations. “SpaceX flight attendant 💙 only 8 months and 6 days left until you reach your destination,” Fox said.

Ahead, check out the rest of our favorite celebrity looks from the past week, including Rihanna in Saint Laurent, Saweetie’s cutout couture, Kacey Musgraves’ ‘70s-era vintage gown, and more.

A new week means a brand new maternity outfit from none other than Rihanna. The Fenty mogul was spotted over the weekend grabbing dinner at her favorite Santa Monica spot, Giorgio Baldi, rocking a fuchsia mini dress from Saint Laurent, which is adorned in turquoise feathers. She accessorized her look with a furry seafoam green clutch and bright green pumps.

Kacey Musgraves attended the 2022 GLAAD Media Awards in Beverly Hills donning a ‘70s-era pink-and-feathered ensemble from Richilene, which was sourced from Tab Vintage. The Star-Crossed singer also wore pink heels and a diamond necklace to finish off her red carpet look.

Dixie D’Amelio arrived at the 2022 MusiCares Person of the Year Gala in Las Vegas wearing a black dress with mesh evening gloves from Mônot, complete with black heels.

Euphoria’s Sydney Sweeney looked darling at the 2022 Canneseries Festival in Cannes, France opting for a sleeveless satin dress from Prada, featuring a tiered lace and crystal-embellished skirt. She also wore black pumps to complete her outfit.

Barbie Ferreira and Kiernan Shipka were spotted attending UGG’s Feel House x Remi Wolf event in Los Angeles, with Ferreira in a star-printed dress from Collina Strada and Shipka in a multicolored cropped top and a black skirt. The two actresses both paired their outfits with fuzzy sandals from UGG.

During her appearance on The Late Show With Stephen Colbert, Elle Fanning was seen in New York City wearing a black dress from Carolina Herrera with black heels from Stuart Weitzman. She also wore sunglasses by Selima Optique and jewelry from Anita Ko.

Selling Sunset’s Christine Quinn was spotted at PrettyLittleThing’s party in Los Angeles wearing a hot pink bodysuit and mini skirt, paired with a fuzzy cropped jacket, all from the brand. She also wore Moschino’s burger-shaped handbag and sandals from her recent Shoedazzle collection.

On Tuesday, March 29, actress Jessica Williams attended the Fantastic Beasts: The Secret of Dumbledore premiere in London wearing Del Core’s pink and black embroidered jumpsuit with black ruffles. She paired her red carpet outfit with bejeweled sandals and a sparkly clutch in hand.