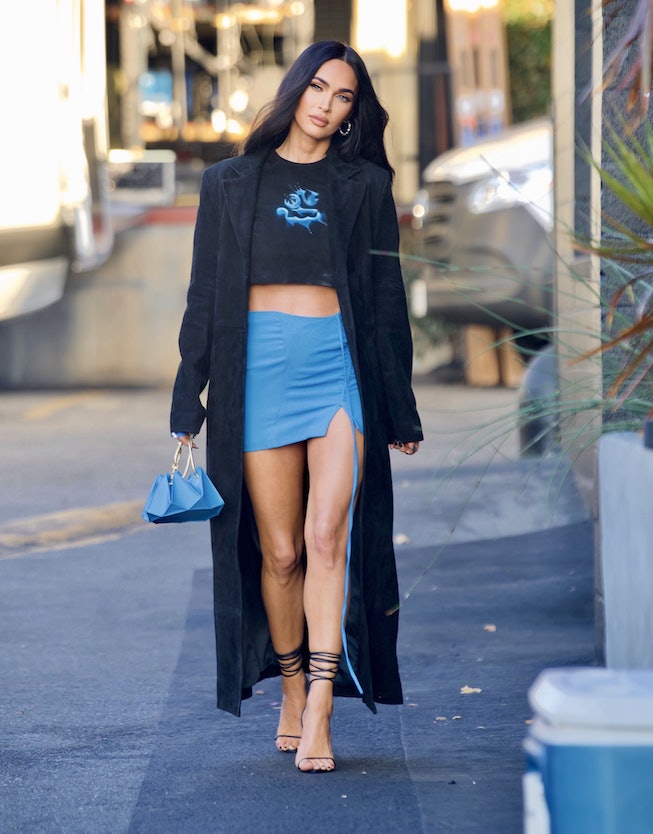 Shortly after her return from London to shoot her upcoming 2022 film Expendables 4, Megan Fox was spotted in Beverly Hills on her way to her boyfriend (and future baby daddy) Machine Gun Kelly’s concert after a photo shoot for her new Boohoo campaign on Sunday, Oct. 17.

In a recent photo of her off-duty ’fit, the actress sported a black graphic crop top paired with a blue, ruched micro miniskirt adorned with a slit from British designer Supriya Lele. She then layered a long black jacket and completed her going-out look with strappy black vegan sandals from Femme LA, a geometric-shaped mini bag from Dutch brand Carat23, and jewelry by Jennifer Fisher.

Celebrity wardrobe stylist Maeve Reilly, who’s the creative mastermind behind Fox’s coveted outfits this year, posted the look on her Instagram and wrote, “I missed her 😍,” referring to Fox’s return from filming her upcoming movie.

Although we’ve transitioned well into fall dressing, it seems that the micro miniskirt, hailing from the early 2000s, has once again made its way onto our favorite celebs and, soon enough, into our own wardrobes. The coveted “going-out” piece was recently spotted on fashion’s latest “it” girls Dua Lipa, Bella Hadid, and even on Fox in the classic 2009 comedy horror film Jennifer’s Body.

But this isn’t the first time we’ve seen Fox in eye-catching Y2K-inspired outfits. Since making her ultimate transformation back in 2020, Fox is also keeping the corset trend alive in a monochrome blue corset top and leather pants from Miaou. With nonstop fashion inspiration being taken from the late ’90s and early 2000s and clinging onto our nostalgia, the revival of the decades’ beloved trends are not going anywhere anytime soon.