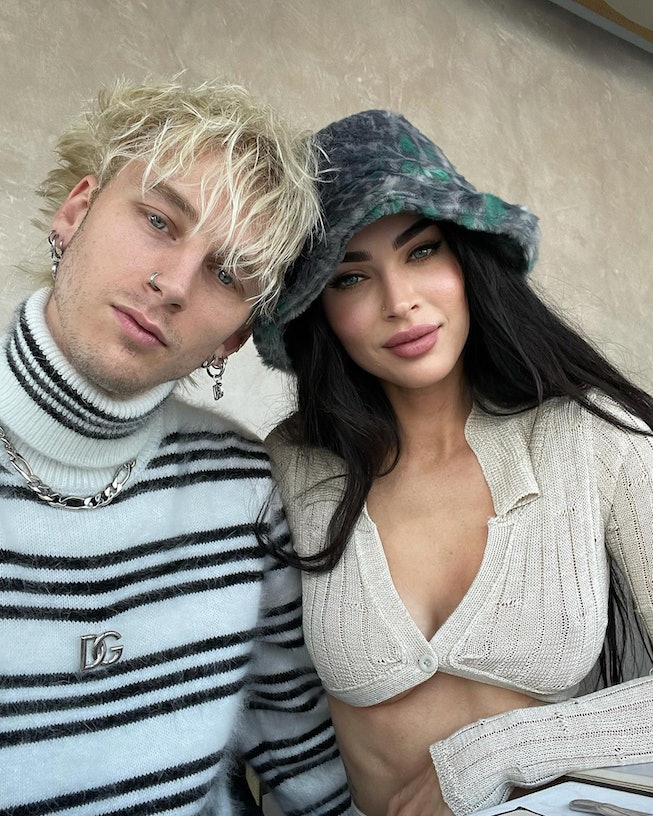 Following the engagement of our favorite pop-punk duo Megan Fox and Machine Gun Kelly, the happy couple have been enjoying their relationship milestone in Italy and, as expected from the trendsetter herself, Fox wore a daring (but very cozy) winter look.

During their trip to Lake Como, the Jennifer’s Body star took to Instagram on Thursday, Jan. 20, and posted a few photos with her now-fiancé MGK in the latest addition to their matching couple outfits. The duo’s vacation #OOTD included Fox in a neutral monochrome look, dressed by none other than her go-to stylist Maeve Reilly. She paired a vibrant leopard printed coat and matching ‘90s-inspired fuzzy bucket hat from Stand Studio, along with wide-leg pants by GCDS. She accessorized the rest of her vacation outfit with white sneakers, a yellow mini bag, and a cameo of her diamond-emerald engagement ring by British jewelry designer Stephen Webster. Despite the cold winter temperatures, Fox also bared her midriff by opting for a micro-mini cardigan top, called “Harley” by up-and-coming “It” brand Edikted (pronounced “addicted”).

The L.A.-based label has recently garnered quite a bit of attention as of late, reaching over 200 million views on TikTok. Aside from its affordable price points, Edikted has also gained a loyal following in a short amount of time, as the Gen-Z-oriented brand focuses on a made-to-order structure and has since been worn by the likes of Addison Rae and Olivia Rodrigo. Most recently, Kristen Stewart was seen in the brand’s “Otto” cropped cardigan a number of times, including her appearances on the CBS Morning Show Variety’s Q&A for the Berlin Film Festival just last week.

You can now shop Megan Fox’s “Harley” knitted and cropped cardigan top, which is on sale for only $46 on Edikted’s website, below.