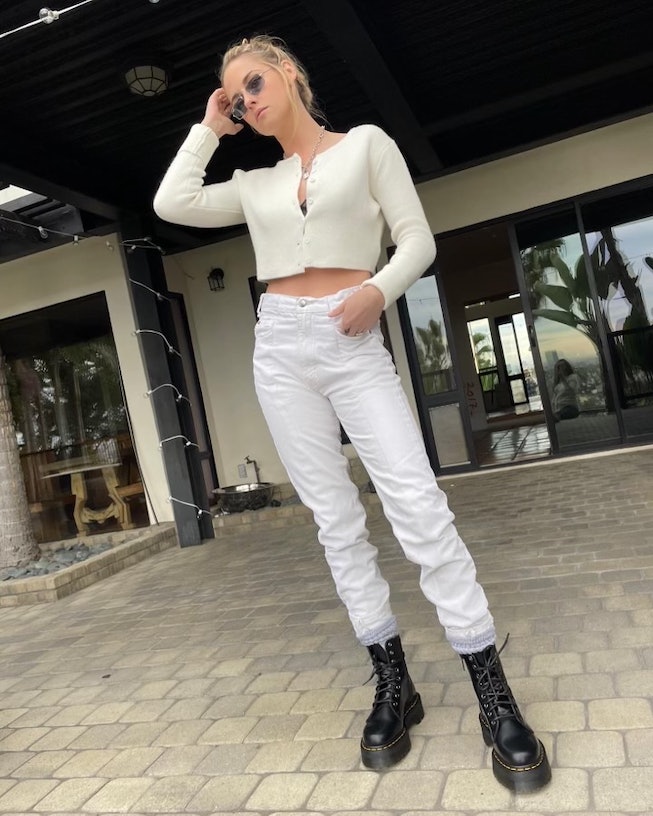 While we love Kristen Stewart when she rocks Chanel haute couture on the red carpet or vintage designer pieces while playing the Princess Diana in Spencer, it’s the actress’ casual but equally fashion-forward ‘fits that have become a fan-favorite over the years, from her recent slouchy white socks to camp button-up tops. Lately, she’s opted for her coveted off-duty style while promoting her latest film during awards season and it seems like she has a wardrobe hero piece, too — a cropped cardigan, called “Otto,” by up-and-coming brand Edikted.

Stewart first wore the knitwear item in Tuesday, Jan. 11, as she made appearances on the CBS Morning Show and a Q&A with Variety for the Berlin Film Festival. Dressed by her longtime stylist Tara Swennen, the Spencer star was seen wearing an all-white look, including the Edikted cardigan (layered over a black bralette) and matching jeans. Swennen accessorized Stewart’s look with a trusty pair of black platform boots by Dr. Martens, chunky socks, tinted sunglasses from Ray-Ban, and her usual mix of silver jewelry pieces. Shortly after, Stewart was spotted wearing the cropped cardigan yet again, only this time it was in black and paired with a silk midi dress from Ciao Lucia! and layered silver chain necklaces.

Edikted (pronounced like “addicted”), a Gen-Z-focused fashion brand from Los Angeles, has been steadily growing its loyal following online, reaching almost 200 million views on TikTok alone. Known for its affordable price points and a made-to-order structure, the label has been reaching unexpected heights in just the past couple of years, as its trendy styles have been worn on the likes of Addison Rae, Olivia Rodrigo, and more.

You can now shop Kristen Stewart’s favorite cropped cardigan, which is still available on Edikted’s website for only $54, below.